If you are the kind of gamer who likes action-packed game titles that combines some puzzle-solving interaction, then you might be interested in the upcoming video game that is about to be released this coming month of July. Introducing Radical Rabbit Stew, a game developed by Pugstorm. For those who may be familiar with the game Bomberman on acid, well it is that kind of game where you play a naughty chef, but in order to cook these rabbit stew, you will have to go to some kind of puzzle-solving before you get to your goal. 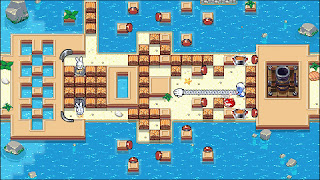 In other words, Radical Rabbit Stew is that kind of 2D platformer when you sink your teeth into puzzles and challenges with a range of rabbit foes, you acquire gameplay-altering spoons that keep puzzles fresh and fun. It is a mixture of expansive, side-scrolling levels and shorter, single-screen layouts. Now your goal is to face off against these unique bosses, while each is requiring different tactics to conquer. Whether it’s using enemy rabbits as ammunition or dodging incoming trains and smacking the drivers out, be prepared to think creatively to defeat each one, or you may die very quickly.

Radical Rabbit Stew will be available on Steam for PC under Microsoft Windows operating system, the game will also be available for Nintendo Switch, PS4 and XBOX ONE, if you do enjoy fast paced-action video games, well check this out, because it will be launch on July 16th, so you don't want to miss that opportunity. You can watch a short trailer about this game below this post. Thanks for reading and watching, I'll see you next time.