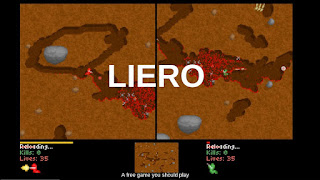 As many of you probably know by now, I am a fan of retrogaming. I remember since the 80's I where my dad bought me an Atari 2600 VCS I felt in love with the world of computing. Since back then I became interested in programming as well. After playing games for many years on both my Commodore 64 and TRS-80 Color Computer, I slowly get involved in PC gaming. As you may know PCs at that time were not the ideal machine for games, but the '90s became the years of changes and one of the games that brought my attention was Liero. Conceived and created in 1998 Liero became a popular duel game in classrooms and homes alike. Between 1999 and 2005 the thriving Liero community created astounding maps, mods, and editors to enhance the experience of this amazing game. This is the final version of the original generation of Liero released in early 2000. 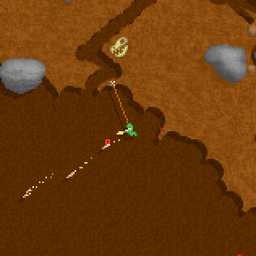 Even after the last two decades, Liero maintains its popularity. If you are still an old fan of Liero, you will be more than happy to learn that there's now an online version of this combat arcade-style game since August 2019, and you guessed; now you can play with others online. Introducing the WebLiero. All you need is to create a room, invite your friends, drop the hammer, and unleash that blood rain. Best of all you can play WebLiero for absolutely FREE of charge and still have the same fun as you used to have with the original version. One great thing that I love about the webLiero version is you can play with an unlimited number of players as well and it remains true to its original predecessor excepted you play online. Sorry, no offline mode. 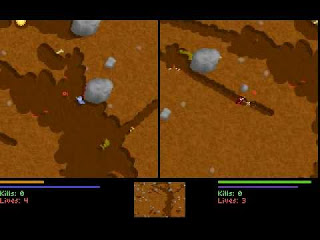 WebLiero is accessible with any browser, I found that it works well on Microsoft Edge and Chrome, but I haven't tried that game with Internet Explorer or Firefox so let me know if it works fine with those browsers. If you wish to give it a try, well just visit the WebLiero website and open a free account for yourself. WebLiero also offers some brand new game modes with randomized map pools and no split-screen mode.

If you prefer, you can also download Two other versions of the game called Liero 1.36 and LieroLibre respectively. Both are true successors of the original game, The Liero 1.36 is a high fidelity clone based on the OpenLiero project from 2007. It is the official new version of Liero and the latest version was released in 2013. This version has fixed several annoying bugs and it has several new modernizing features and of course, it runs perfectly on modern computers. Version 1.36 as been released for Windows users only. Finally, There is LieroLibre, this is a project to liberate Liero from all its proprietary components and to allow it to be distributed completely freely.

For more information or to access the WebLiero community or to download one of the versions of the game that I've just mentioned, check out thislink. So enjoy the best game ever played online before, or make sure you download a free copy of the game!