Difficult to innovate in a genre as codified as the First Person Shooter. To find inspiration, you sometimes have to look elsewhere, and then you have to open your horizons. This is how the two AWE studio developers probably conceived the concept of BPM: Bullets Per Minute: they were just seeking a kind of game that is the opposite of the traditional FPS, the rhythm game, and by integrating its gameplay elements into a well-known formula. The result is an intriguing and rather effective game, but also incredibly frustrating at first glance. 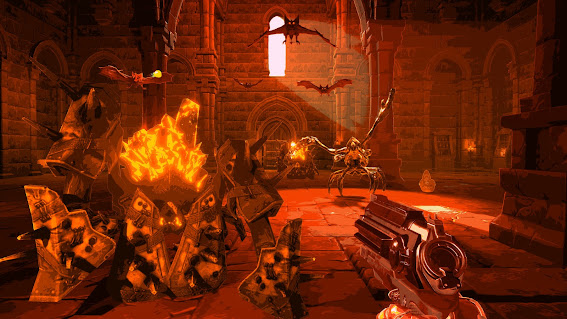 The rhythmic aspect of BPM: Bullets Per Minute is a particularly original concept that should be explained clearly because it seems unclear at first glance. But first of all, let's lay the foundations. Besides its musical component, BPM is a classic FPS / Rogue-lite. You appear in a randomly generated dungeon and move forward piece by piece, knocking out all the enemies there until you find a boss that you will need to defeat to level up. In the meantime, depending on your luck, you may find weapons, powers, special items, skill upgrades, cash, vendors ... Die and you start all over again, losing all of what you want. you have unlocked and going back into the unknown. In itself, this formula is not new and we have already seen many FPS in this genre (Immortal Redneck, STRAFE, Nightmare Reaper).

However, by incorporating the concept of rhythmic FPS, BPM sets itself apart from its cronies. Here, almost all of your actions are linked to the beat of the music, represented in the center of the screen by a bar and diamonds meeting on your viewfinder at the right moment. You can walk and spin around freely, but dashing, reloading, and shooting all go along with the music. Press at the wrong time and your action is canceled altogether. Conversely, if you manage to keep a perfect rhythm, the game can grant you bonus damage. By preventing the player from taking action when they see fit, BPM is making a radical paradigm shift that will force you to revisit the achievements of the last thirty years of shooting games. And believe me, the first few days of play will generate terrible frustration. In fact,, despite its very particular gameplay, the game does not give a gift. The paintings sometimes show up to fifteen enemies simultaneously and they hurt a lot - the slightest projectile takes 25% of your life. This requires constantly staying alert, moving, aiming precisely, and hitting your opponents multiple times to get rid of them with the base weapon. Add to that a reduced range system (which can still be improved) and the rhythmic aspect to take into account: you get tense situations that end badly and, it seems, unfairly. You know what I mean… 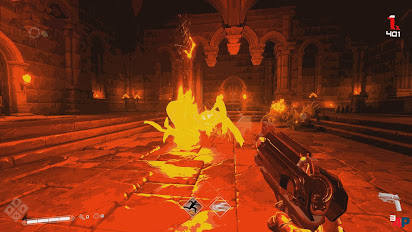 However, the brain is a great organ and it does click after a few miserable sessions. Without thinking about it, almost mechanically, we get used to the rhythmic constraints. These take on their full meaning in fights against bosses, mini-bosses, and a few powerful enemies whose attacks are also beat-based. From then on, BPM becomes a much more satisfying experience and we find ourselves shooting enemies by headbanging to the rhythm of the soundtrack. Death is less frustrating and you quickly want to restart a game, hoping to be better off this time. For those who would have more difficulty adapting, the developers allow you to customize your game: in addition to the difficulty of the run, which influences, in particular, the number and power of the enemies present in the dungeons, Bullets Per Minute offers an option increasing or reducing the permissiveness of the rhythm bar and an auto-rhythm mode which completely removes this aspect. However, the latter has no interest (unless you are a great journalist) because it makes the game easy and devoid of personality. 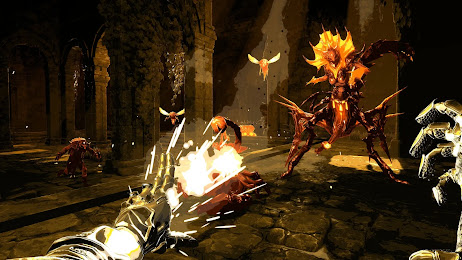 As in most Rogue-lites, randomness has a predominant place in BPM and chance can simply ruin a run, or conversely, make you almost invincible. It happens regularly to start a game in a world where no loot can appear, preventing any progression of his character during a level, before dealing with a hardcore boss. Or not having any really interesting bonuses, while sometimes the healing/luck/damage triptych unlocked from the first dungeon will make the run extremely easy. However, luck is not everything and you will have to learn to master the rhythmic aspect of the game if you are to succeed, especially in Hard mode.

The originality of BPM also lies in its visual appearance. The developers opted for a saturated filter system and each world has its own dominant color. If one could be afraid of having itchy eyes after a few minutes of play, it is ultimately nothing and the rendering is quite pleasant. I would still have some reservations about the readability of this style which sometimes leads to confusing enemies and backgrounds, which is a shame for such a high-powered FPS. Besides that, BPM borrows elements from Norwegian mythology and has a classic heroic fantasy art direction, without taking risks. So expect to come across medieval dungeons, strange statues, colonnades, lava lakes, and other ancient ruins across the four worlds that make up the game. Ditto for the bestiary, not original for a penny: bats, giant spiders, Ax throwing orcs, wicked wizards, and other ghostly spirits… All of this is sadly agreed upon - except for the funny NPCs / vendors who come to play it down. 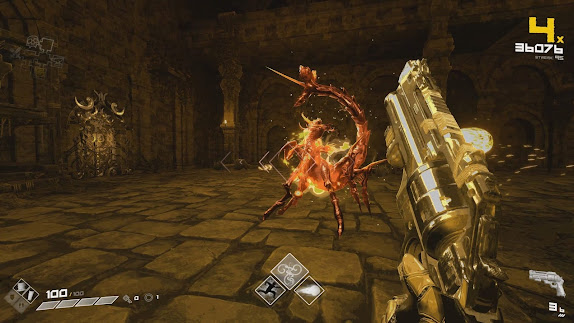 Bullets Per Minute is rather provided in terms of content. Even if the runs are ultimately quite short (8 levels, count a little less than an hour to reach the final boss if you do all the rooms), the game offers a large number of possibilities justifying to try the adventure on multiple occasions. . For starters, each world exists in several variations affecting the gameplay (darkness, explosive monsters, slippery ground, etc.). You will also find a lot of equipment, weapons, and powers, each with its specific characteristics and behaviors. For example, a shotgun will have to be reloaded between each shot, always respecting the rhythm of the music, while the submachine guns will work in bursts. The equipment to pick up can also be a game-changer, like this item that simply allows you to fly through the levels. Regarding the level design, if the rooms still look very similar from one part to the other, we quickly notice that some contain secret chests or other power-ups to be unlocked with the right powers. Five characters with distinct statistics and skills, four of which can be unlocked by advancing in the game, also allow you to vary the pleasures. Finally, a few challenges complete the picture by offering to do a pixelated run, a boss rush or a “floor is lava”. In short, there is still plenty to do for a project of this scope.

On the technical side, it's perfect. BPM certainly does not display anything phenomenal but, all the way except for the shadows which cause the framerate to drop, it runs at more than 100 frames per second in 1440p on my config (RTX 2060, i7 7700K @ 4,2Ghz, 32 GB of RAM). The game still offers many options for more modest PCs or players who like to personalize their experience: dynamic resolution, resolution scale, FOV, motion blur, anti-aliasing, post-process, shadows ... Also, I have no not encountered a single bug during my playing hours - which is very rare and should be noted. Well done to the developers of AWE Interactive who, despite the small size of their team, have managed to release a well-finished product. 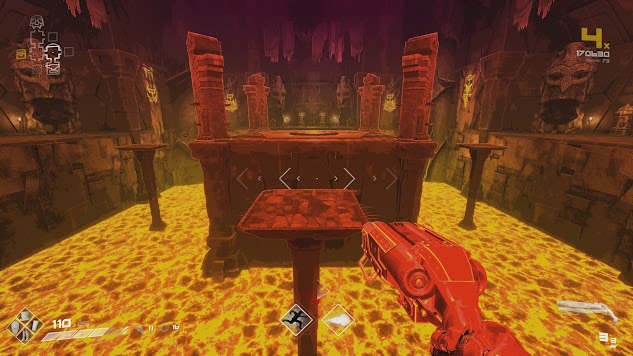 BPM: Bullets Per Minute Review Conclusion, The rhythm in the skin

BPM: Bullets Per Minute is an original concept title, mixing FPS, Rogue-lite, and rhythm game. It is clear that the project led by the two developers of AWE Studio is holding up. Even if we can blame him for the lack of ambition of his universe as well as his bestiary and that the beginnings are complicated, we quickly come to appreciate playing in rhythm with the music and the game finally makes us want to redo a part “just to see”. For more information regarding  BPM: Bullets Per Minute, visit the official site. Enjoy!