When it comes to Marvel's Avengers, it's strange how much excitement and doubt arouses over the famous Square Enix project. On the one hand, seasoned superhero fans put their faith in the talent of Crystal Dynamics, and on the other, a bunch of players is ready to battle against the funny game design opted from the Canadian firm. Here, the creators of Tomb Raider going to develop the side of the slasher-looter with, at the center of the story, an unknown heroine in the person of Miss Marvel (not to be confused with Captain Marvel, widely popularized in the past from the movie) aka Kamala Khan, a young high school student starting out in the field. As we approach an imminent scheduled release in early September, I was able to get my hands on the beta scheduled for August for the general public, quietly and full of curiosity. A generous demo that was left to feel for almost five hours. The time has therefore come for a first verdict, half fig, half grape. Basically, the idea of ​​an Avengers game is a gamble when you know the video game potential of even one superhero. So bringing together a host of them in a single adventure is a difficult idea to which the Marvel Ultimate Alliance has already tackled, not particularly memorable sawtooth hack's slashes. Here, Crystal Dynamics sees things in a big way and adapts to current modes: Marvel's Avengers relies on multiplayer missions, loot systems, cosmetic reward passes and most of the elements that punctuate an entire facet of the game. modern video. But before getting to the heart of the matter (which leaves you skeptical), let's start at the beginning. 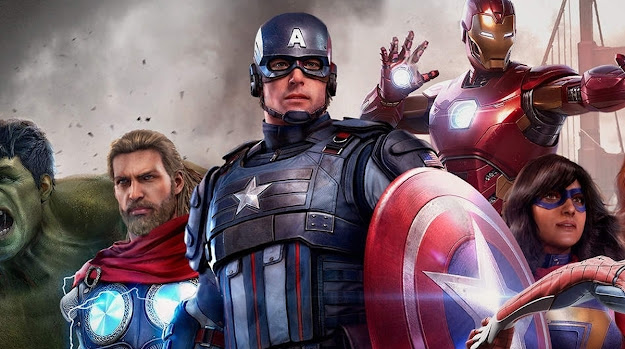 This beta, therefore, allows us to start the adventure with its prologue: the Avengers, true figureheads of the United States made up of Thor, Iron Man, Captain America, Hulk, and Black Widow, are literally the stars of the country ... until a mysterious criminal organization turns all Stark technologies against them and against the city of San Francisco. The mission of the bridge, which then acts as a tutorial, allows these iconic characters to be played in turn into a linear and Hollywood sequence, focusing everything on popcorn scenes and long-winded explosions. Unfortunately, this is a dramatic defeat that leads to a supernatural explosion, killing or endowing some citizens with formidable powers. Five years after that dark day called “A-Day”, the Avengers no longer exist, Captain American is dead, Stark Industries has been liquidated and AIM, an organization led by a crazy scientist, has taken control with dark targets disguised as saving humanity. Kamala Khan, a student fan of the Avengers affected by the full force of A-Day, has seen her bodily properties also deviate: she has more or less the capacities of the Elastic Man of the Fantastic Four but seems determined to rally the Avengers to restore the situation. 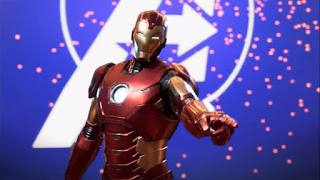 With the good old Bruce Banner, she will go in search of the famous SHIELD helicarrier and both will fall, after many fights, on the Abomination, the evil alter-ego of Hulk, and that is not recommended for a family meal by the way :).  After that, our duo will have to get the downed ship, which will then serve as a HUB, and they will also be able to use a private jet to fly around the globe on missions. Here's exactly how the beta goes: a good hour and a half of solo play to land on the world map - the demo will then automatically unlock the characters of Iron Man and Black Widow, who aren't supposed to be playable yet. this initial stage of the adventure - for around ten objectives to be covered in cooperation with four, local with the AI or online with real players. It seems like there's nothing to do with it and to understand the foundations on which Marvel's Avengers are built relatively quickly. 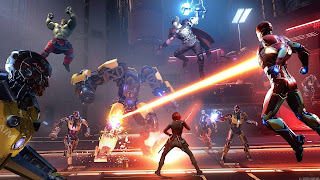 Before each multiplayer mission, apart from the scripted solo ones or a few specific ones, you can choose your superhero who, you can imagine, has its own gameplay that you will have to assimilate. While all of them share mechanics like ranged attacks - Hulk will tear off a piece of dirt to throw it, Miss Marvel will stretch out her arm, Iron Man will fire rockets, etc. - They also have their own combos with a light attack touch and a heavy attack touch, which can be combined on the ground or in mid-jump. On this side, Marvel's Avengers is so brutal and effectively beat them all, with direct sensations and far from being unpleasant. While it is possible to level up simply as you fight and spend the improvement points on new skills that will deepen the gameplay, we still go around quite quickly in the playability of each character. The interest in changing superheroes with each new mission, therefore, redoubles the interest, already to advance all the members of his team (some missions recommend a specific level of experience) and then simply to avoid the weariness itself. In addition, we must admit that the clashes quickly turn into total chaos, leading to a jungle of light effects difficult to read and reminding us that the title of Marvel's Avengers favors ultra-raw action to game intelligence. elsewhere, difficult to balance all the headliners: Iron Man to name only him, seemed to us somewhat cheated (but very pleasant to play) compared to a disadvantaged Black Widow, to name but one. 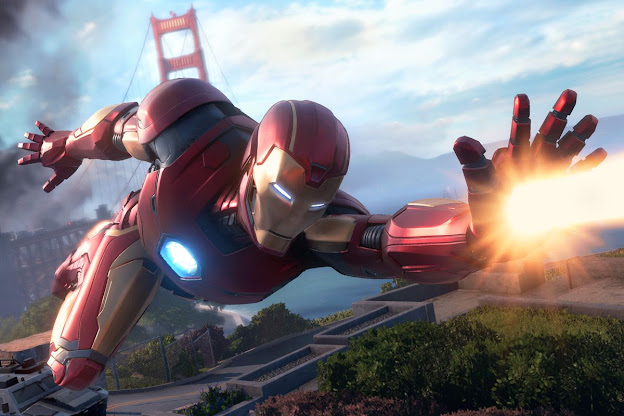 In the loot mouth

And, most importantly, Marvel's Avenger has one nasty obvious flaw that fits into the paragraph above: It gets pretty darn repetitive in building its levels and goals. Whether in snowy, forest, or rocky environments, we constantly find ourselves doing the same things and sometimes in the same underground corridors (still belonging to AIM, the company that we must counter) leading to the capture of disguised areas, destruction of generators, or, very often, the simple elimination of all enemies present. It's pretty silly and means and far from inspired, even if some more open levels allow us to gently explore a few nooks and crannies in search of chests and items, which is far from breaking three legs of a duck, we will agree. And above all, the title encourages you to farm certain levels simply to gain experience!

Still, the game is not bad and Marvel's Avengers has a perfectly decent feeling, but these particularly weak level design foundations don't necessarily give confidence for the sequel. We therefore greatly hope that the solo missions will make it possible to vary the objectives and the situations, with a suitable story (from which we have seen, difficult to judge the writing after all basic with Kamala Khan in its center), enemies worthy of the name and more awe-inspiring sequences. In the demo, apart from the Abomination, we had to deal with a boss on the most difficult mission: a giant robot that had to be attacked weak point by weak point, in a rather classic pattern. Likewise, fingers crossed for more scenes of this type, possibly with more creative-style opponents or drawn more from the Marvel Universe. There is plenty to do, though.

One for all! All for one

Then there is the tough guy, which is why Marvel's Avengers struggles to convince the internet. Undoubtedly to deepen its mechanics, the Canadian software company relies on a whole loot system that is certainly very fashionable, but not necessarily relevant given the game itself and what is expected of it. In the scattered chests around and after completing missions, you will collect resources and random elements (with the rarity ranks that go well) that you will need to equip your character to advance or even adapt to certain situations. This, therefore, requires managing an inventory that fills up and assigning such and such an element, having such and such an effect. If it is possible to automatically provide the best items that we have in our possession without fussing (which we will favor), it is clear that we do not really want that in such an adventure. RPG cogs, yes, but having to re-assimilate a complex interface and, above all, having to immerse yourself body and soul in these deceptively logical facets is not attractive. 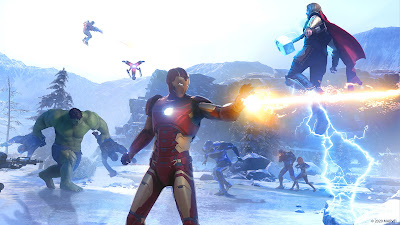 Even worse, a pass system is present with, at each level, a cosmetic reward to unlock. It can be a costume, a banner, or virtual money, and we can spend special points to accelerate our progress (we imagine that we will have to take out the credit card to quickly have this digital currency). Free-to-play sections that will put off some, and rightly so: Marvel's Avengers would have done better to simply focus on a skill tree worked more than in all this ill-suited engineering that is better left to other hits multiplayer. We reassure you anyway, the game remains fully playable, is not pay-to-win and history remains present (well, we hope) to keep us going and make us forget this questionable aspect.

We come out of this preview with a rather curious overall feeling, which makes us think that Marvel's Avengers has chosen a funny direction for a title like this. And yet, it is clear that despite the flatness of the level design and the objectives, we sometimes took pleasure and want to discover more, to advance our favorite heroes, and to beat without any restraint the bestiary made available with his friends. Could this be the definition of a guilty pleasure? Maybe. I must admit that this is also a large-caliber AAA production: the game is rather nice (we will still note pronounced framerate drops on PS4 Standard, but not at all on Pro) and sometimes know to impress (but not enough, very clearly) and bodes an effective experience if not clever and original. Sometimes you also have to know how to take the fun where it is and, as it is, Marvel's Avengers seems to be signing a rough and mainstream journey that, admittedly, is based on very questionable game design. So we’re crossing our fingers that the end game will vary more its situations and its gameplay, it could well get it out of this uncomfortable situation where it lies halfway between these current trends definitely undesired and action with a certain energy. We'll see.

See by yourself Marvel in action, just check out the video. For more details visit the Marvel's Avengers official website to learn more.