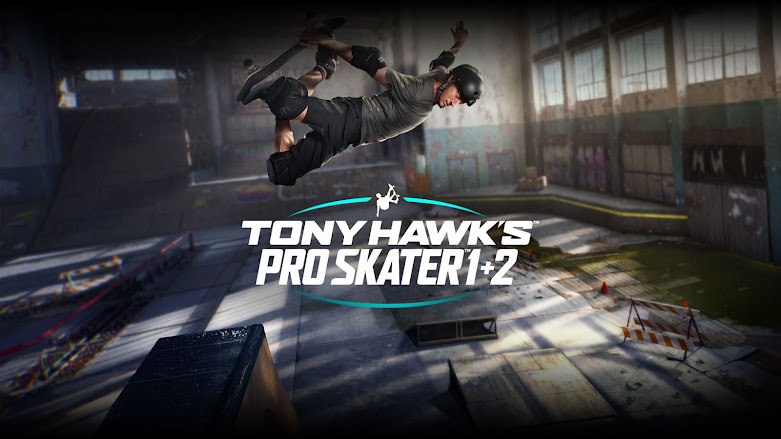 In 1999, Babe hits theaters, Ricky Martin sings Living La Vida Loca. But 1999 also saw the release of the first episode of Tony Hawk’s Pro Skater, a video game that would mark the video game and the place of skateboarding in video games. Released on Nintendo 64, Dreamcast but especially PlayStation, the game was the perfect compendium of the world of extreme sport: the impressive and enjoyable aspect of the tricks, the most famous skaters of the time (Tony Hawk and Rodney Mullen in the lead ), and a soundtrack, between rock, punk, ska, metal or hip-hop. Tony Hawk's Pro Skater is one of those games which very clearly marked the players, because it managed to be accessible to all, offering a very high margin of progression, and had a great feeling, perfectly representing the spirit of skateboarding in the 90s, when the popularity of the practice was unparalleled. 20 years later, and after fifteen games and 5 years of absence, the license is back with Tony Hawk's Pro Skater 1 + 2. A game between remaster and remake, compiling the content of the first two titles of the iconic series. But is it only that? So I have been played Tony Hawks’s Pro Skater 1 + 2 on PlayStation for about 20 hours, completing all levels 100% with our created character. We also spent some time on the skatepark creator and played local multiplayer many of the available game modes. We still have a lot of content to unlock with the many challenges, and redo the levels with each skater to increase their statistics. 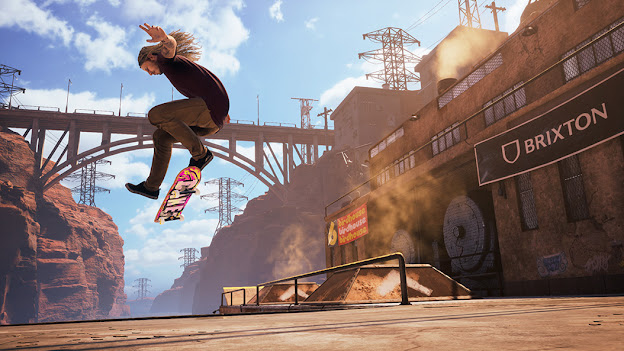 Put on the wheels, and let's go!

What is this Tony Hawk’s Pro Skater 1 + 2 is all about? Halfway between the remaster and the remake, the game offers, with a brand new graphics and physics engine, the content of the first and second episode of Tony Hawk’s Pro Skater. Two games released in 1999 and 2000 respectively on consoles of the time. The basic principle is simple: you play as a skater and you have two minutes to complete a list of missions in a level. This is the main arcade mode of the series, which we find here as Skate Tours.  Tony Hawk’s Pro Skater 1 + 2 also invites you to relive in an updated way in this experience and then discover the Tony Hawk feeling of the video game practice of skateboarding. In this game you can go alone, you can turn left, or right, and brake, then you can also use a button for the ollie, a button for the flips, one for the grabs, and finally one for the grinds. The game will ask you to make combinations of stick position or arrow keys with these buttons to perform the technique. 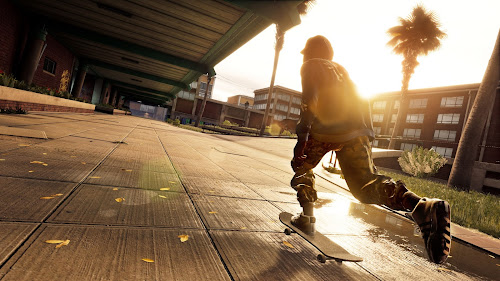 Who says arcade game means dynamic and punchy game, but above all scoring! And for that, there are plenty of skateboarding techniques used to tie together tricks and create devastating combos. First, we find the manual, a technique that makes us balance on two wheels only, which will allow the connection between several tricks on the ground. We also find the revert, making us turn the board 180 ° on the ground, allowing us to make all possible connections, in the air on the ground for example. Other techniques such as the wall plant (bouncing off the wall by support) or the wallride (we will put our board on the wall for a few moments) are also part of the game. The goal is therefore to chain the tricks, to use links to increase the multiplier.

The multiplier increases for each trick performed, and it will be possible to change the position of your board in full grind for example to add a point to the multiplier counter. A gauge called special will also fill up if you do big tricks and small combos, thus unlocking the special specific tricks to each skater (which can be totally personalized), thus allowing you to have a much higher score. This summarizes in a few words the system of Tony Hawk's Pro Skater 1 + 2. We find ourselves suddenly in terms of feeling with the controller in hand between what we could find on a Tony Hawk's Pro Skater 3/4 and what we could have on the Underground series. A rather wise choice because it is a very good balance in terms of playability, allowing players to find something quite familiar while remaining quite current with a nice openness in terms of the possibility of combos. It will also be your responsibility to balance, and improvise all of this. 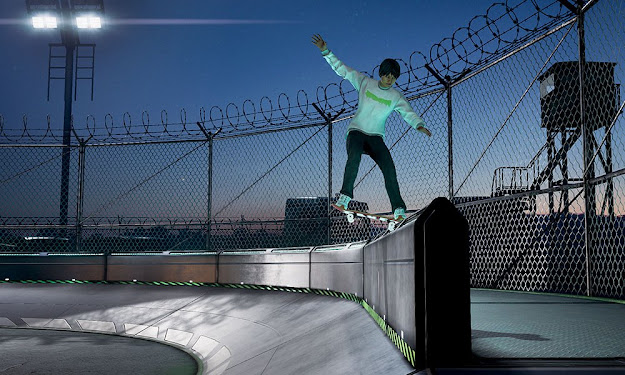 But a good Tony Hawk-branded game also works largely on its level design. In fact, we can have the best game system for an arcade game, but if we do not find any gap, no chain from one sector to another of the level, it will be difficult to be able to score well. And on this point, there are some very good as well as some not so good. Let's start with these new versions of the cards of Tony Hawk, which, suffer from one element: the changes made in Tony Hawk's Underground 2. Because yes, if we found much of these cards in the arcade mode of the game, they had undergone modernization in terms of level design to stick in particular to the gameplay which had also grown. 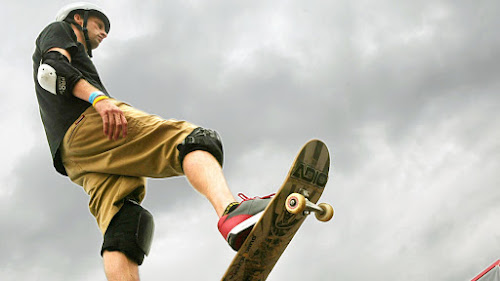 One of the most examples I have seen is the iconic warehouse level. Yes, the level design is really well done and looks similar to the first one, but at the ending, we feel almost cramped, with a missing bowl, the second part of the level, added later, offers a complete skatepark inside, and something is also missing On-call. I understand that the game has been revamped from the first version, and to me it seems logical to take this base again,  despite the size of the level itself enlarged, we end up with a little gap and a map where we quickly made the tour. Some levels of the first one still stand out like the shopping center which works extremely well, both visually and in terms of game speed with the current mechanics. Regarding the cards of the second episode, we see that these suffer much less with age. The reason is simple: Tony Hawk’s Pro Skater 2 added the manual to the game as a big novelty. It makes sense that the cards are also already thicker at the start and with an average course of the player better thought out for those long combos.

In terms of the objectives of the Skate Tour mode, I find exactly what we found at the time at the ready site. This is also why it is difficult to say that Tony Hawk's Pro Skater 1 + 2 is a complete remake of the game as it tries, all the same, to offer an experience very close to the original, by renewing every aspect of the levels. Lovers of the first games will also like to find these objectives, but fans of versions revisited in the Underground for example would have loved to find objectives such as the letters COMBO to obtain in a single combo, which would make total sense with the game system. 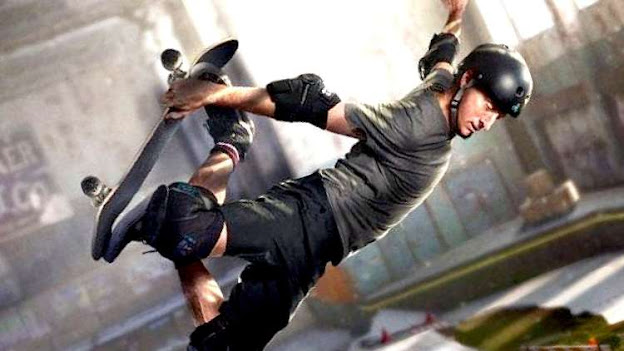 A pleasure to play at all times

In any case, all this does not prevent a pleasure that is very difficult to conceal from the game. Anyone who has played a game in the series very quickly will quickly find his marks, his automatic combos and will have fun browsing the game. set of levels. As a result, you don't have to do all the level objectives with each character. You just have to do it once, and then come back to it with the different skaters to get the different skill points to improve them. The choice of the cast in Tony Hawk's Pro Skater 1 + 2 is also like the game: we find in a classic way everything we found in these two games, with a small addition of some skaters from the new scene. There is also a lot of customization for each skater as well as for your own skateboarder that you will have the opportunity to create. We find a very large part of the skateboard brands known to all such as DC, Element, Independent or Vans ... 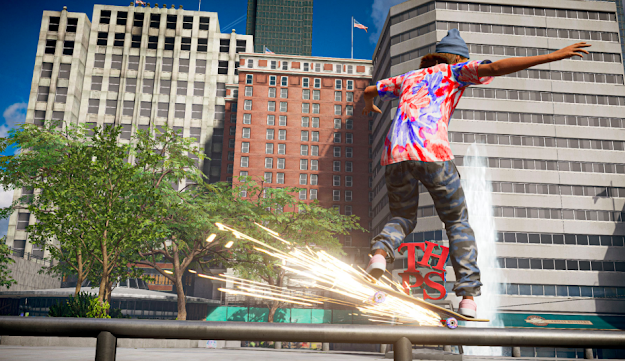 Surely you are wondering how long the game will keep you going and for that, it will all depend on what you are looking for in this Tony Hawk's Pro Skater 1 + 2. If you just want to do the skate laps mode, complete the objectives and level up. your character, the game will keep you going for about ten hours or less depending on your skill. But if you add to that all the challenges offered by the game, allowing you to unlock hidden characters, cosmetics ... Add to that the local and online multiplayer mode (up to eight) with many modes such as the famous trick attack, and we find everything we can look for in a Tony Hawk game. All? No, he remains of course the creator of the park, also filled to the brim with possibilities which, if he would need a small patch to solve some problems of collision and placing of objects, will be, as very often in the series, an unmissable editor for lovers of creation. 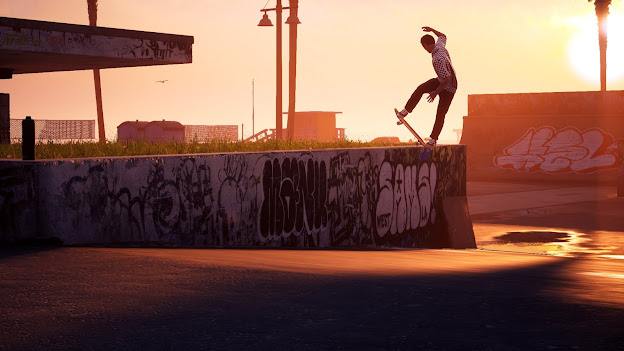 And we didn't even talk about the soundtrack, picking up a lot of what was found in the first two episodes, while adding in addition, about thirty songs from current bands and artists. Again, Tony Hawk’s Pro Skater 1 + 2 sits in the line between total respect for the original game, while offering a modernization of the whole. And then? Well, that's a question that one can ask so much here, Vicarious has done a pretty colossal job, very easily allowing Activision to launch the license to different horizons. On the one hand, we could have within a few weeks the announcement of a Season Pass bringing for example the content of the 3rd Tony Hawk's Pro Skater in this game. Activision could also announce in a few months a remaster also of the duological Underground based on this engine. The third solution could be a season pass with only cards from each iconic game in the license. Last possibility, the start of a brand new episode, which could therefore further the transition to modernity that began in this episode.

The return of Tony Hawk’s Pro Skater with this 1 + 2 episode is, for fans and newcomers alike, a real small event in itself. Between remaster and remake, total respect for the episodes and modernization of the whole game, Vicarious manages here to make a balancing act that works really well and that we really enjoy playing and replaying. A really effective game system, coupled with a level design that has already proven itself, all enhanced by a graphics engine with pretty insane rendering, making this episode most certainly the very best of the license.