Age of Empires 3 Definitive Edition Review: the RTS master is back 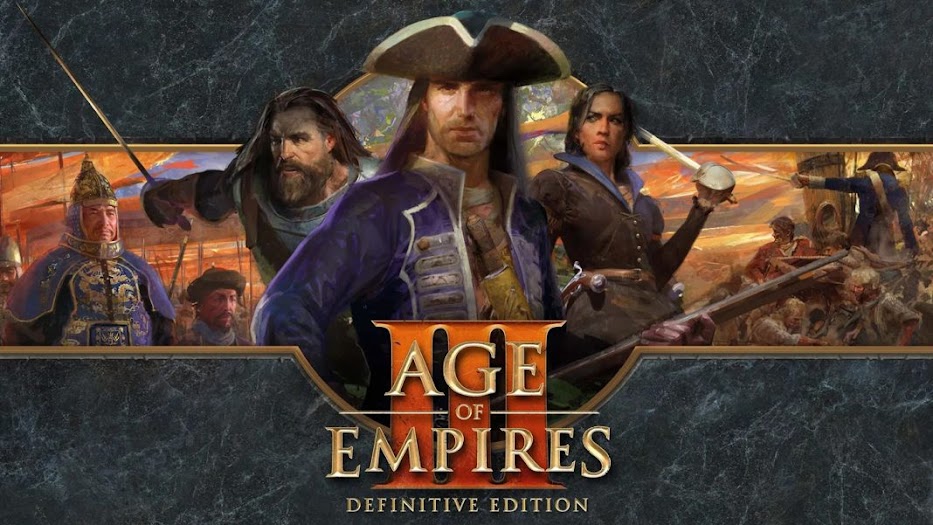 After offering players a remaster of the first two installments of its famous franchise, Microsoft is now tackling the episode most loved by fans. A great classic reworked and enriched to the fan's delights of the genre. Tackling one of the gaming business’s most popular RTS is no small feat. Released in 2005, Age of Empires 3 was able to convince with improved gameplay, very impressive graphics, and rather substantial content. A recipe that obviously hit the mark, and which today makes Age of Empires 3 a reference in the game industry. A monster such as AoE 3, deserved a remaster worthy of the name. It is clear that like the first two parts, the work done on this third episode is impressive. With updated graphics and new game modes and civilizations, this Definitive Edition pays a magnificent tribute to the original title. 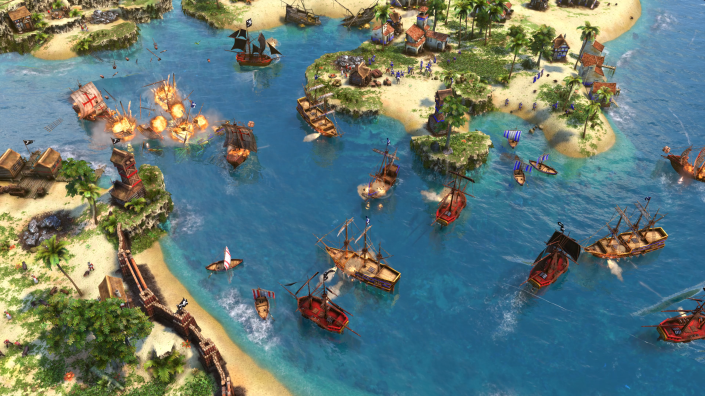 If the title displays such good improvements and very substantial content, the fact remains that it remains very accessible, and especially to smaller markets. Listed for just an inexpensive price on Steam and the Microsoft Store, it is also part of the Xbox GamePass offer, without having to pay a single extra penny. Considering the amount of work done by the developers and the hundreds of hours of gameplay the title has to offer, it seems the price is more than reasonable. Among the great novelties offered by this AoE 3 Definitive Edition, we will obviously note the work done on the graphics. Already very pretty at the time, the game now features a 4K visual, which looks great. This is mainly felt on the various interior stages during "cutscenes", where we notice very beautiful lighting effects. However, the visual improvement provided by this Definitive Edition is much less significant than that provided by the remasters of the first two parts. This third installment was already very impressive 15 years ago, with a significantly improved game engine compared to AoE 2 and Age of Mythology. So this remasters of the third installment doesn't impress me as much as the previous two, although it does the job pretty well. In addition to the very nice enhanced graphics, the overall aspect of the game is revised. The interface is updated, including the ability to revert to the original at any time from the game options. The modeling of characters, buildings, and other elements of the scenery has been completely reworked. The textures have been smoothed out while many details, especially during explosions, have been enriched. A nice leap forward for this episode, even if again, we feel the technological leap less than on the other two Definitive Edition. 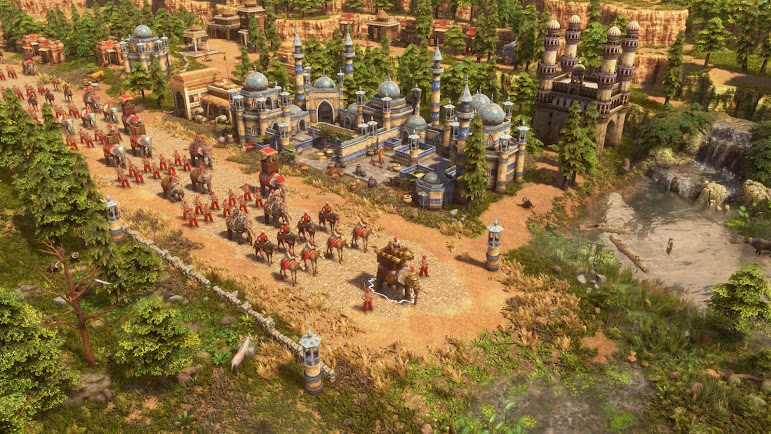 Another second important point that this Definitive Edition includes: its content. The game will hold you back for dozens of hours, as the content it offers is enormous. Like AoE 2 Definitive Edition, this episode brings together all of the original additional content. So we find the basic scenario, to which is added the campaigns centered on the American War of Independence and various past events on the Asian continent. Three very rich scenarios, which in particular should occupy the player for dozens of hours. Two new civilizations are also appearing, in order to bring the number of factions to 16. The Incas and the Swedes bring a new wind to the skirmish mode, within particular all new units, buildings, and also, cities. Some new cities graphics for Age of Empires 3, are also available, yes, cities are back with a nice graphic update. Their management is as pleasant as ever, with obviously crucial importance. You will have to rely on them during your skirmishes, in order to benefit in particular from numerous assets, bonus units, and highly offered resources. The player is also spoiled when it comes to the game modes. So there are all the modes offered in the original game, as well as two new, never-before-seen modes: Historical Battles and Art of War. The first will make you relive some historical battles, slightly scripted, and rather well put together. The Art of War offers you to try out several tutorials while meeting several specific objectives in order to gain experience. In total, that's more than a dozen game modes, single or multiplayer, available. Suffice to say that for less than $30USD, the player will very clearly get his money's worth. Regarding the gameplay, Ensemble Studios is all about nostalgia. The title remains unchanged, with some retouching here and there. Note for example the work carried out on the pathfinding of units. While it has been slightly revised to offer smarter artificial intelligence, it is nonetheless dated and too unconvincing. Too often units get stuck in dead ends, especially after the construction of a building or a wall. All too often, your workers don't know which path to take after building ramparts around your city. 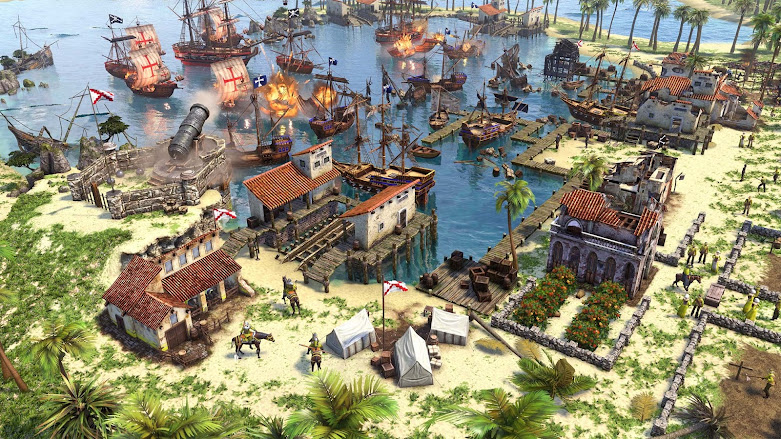 The pathfinding is unfortunately not the only part of the title to have aged badly. Note for example that some elements of the HUD remain too unreadable on the map. The health and progress bars are far too small or have little contrast to the environment. In addition, we note a lack of modernity in the control of units. It is also impossible to select a very large number of soldiers, as in the days. Instead, it will be necessary to select a part of it, make it act, and then select another part. The creation of regiments or “groups” of soldiers could have improved this axis. Age of Empires 3 is nonetheless one of the most brilliant RTS of its generation, not least thanks to strong mechanics. You always have to found your city, defend it by recruiting various units, and construct all kinds of buildings necessary for the proper functioning of the colony. The right balance to be found, especially when you find yourself facing a terribly aggressive AI, who is only looking to destroy your fortress. Thus, it will imperatively be necessary to discover new technologies and to bring splendor and glory to your village.

A style of gameplay that adapts perfectly to multiplayer, to which this Definitive Edition devotes itself a great deal. The title now supports mods and has fully dedicated servers, in order to provide better stability and an improved multiplayer experience. Age of Empires 3 Definitive Edition brings a much-appreciated title up to date, including a nice visual update. The title is surprisingly beautiful - just like the original work, and displays some very beautiful and faithfully reworked landscapes. The 3D models are still too simplistic, but overall convincing. A visual update, which does not interfere with performance. If this AoE 3 Definitive Edition requires better technical specifications than the remaster of the second episode, it is still very well optimized for most machines. Thus, the recommended configuration in order to play in the best conditions is a PC with 16 GB of memory, an Nvidia GeForce GTX 980 graphics card, and a third-generation Intel i5 processor. Obviously, if you have a better configuration, the game will only be more beautiful and smoother. It will also be possible to play on a weaker configuration, as long as you ignore the 4K graphics and very good fluidity. On the storage side, the game is more hungry than its predecessor, since it will require at least 42 GB of free space. Superior technical specifications compared to the Age of Empires 2 remaster, but still within the average computer on the market. It is therefore difficult to do without such an accessible episode, both in terms of the system required and the price: € 20. 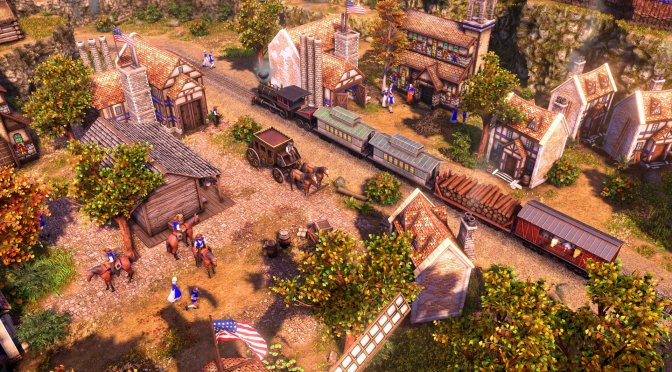 Age of Empires 3 Definitive Edition is without a doubt one of the best remasters since 2017. This remaster includes all of the additional content of the original game, to which are added two new civilizations as well as two new game modes. An obviously very complete title which takes again the excellent bases of its predecessor while eliminating some flaws. Despite aging pathfinding and a few mechanics that have aged badly, Age of Empires 3 absolutely does not bear the brunt of the years and does not have to be ashamed of the current behemoths of the genre. This is a formidable real-time strategy game, surprisingly rich in multiplayer, and great diversity thanks to the incredible line-up of civilizations presented to us. Despite the enormous amount of work done, the game is only sold less than $30USD. It also has the merit of benefiting from a nice 4K display, redesigned 3D models, and a modernized interface. For more information about the game please visit the Age of Empires 3 Definitive Edition official website for more details.