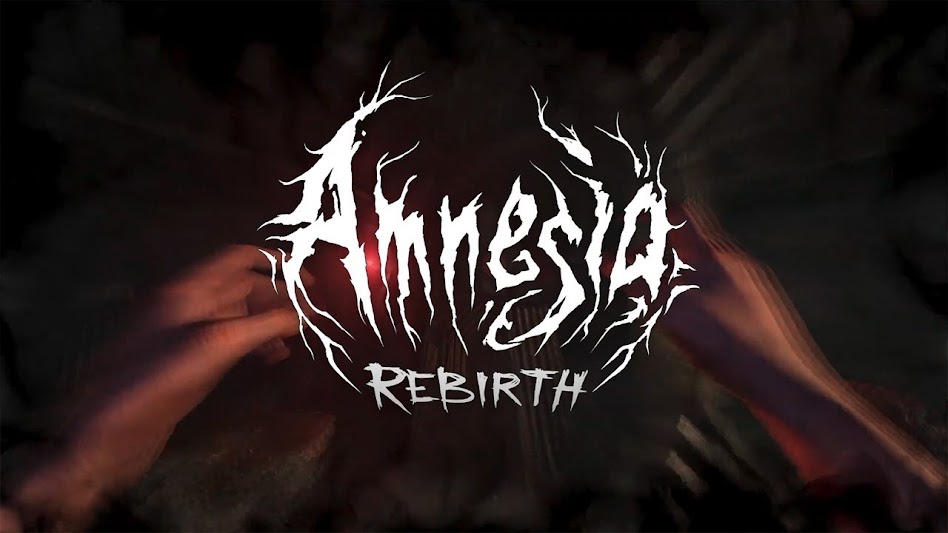 Ten years after Amnesia: The Dark Descent, Frictional Games is once again plunging into madness. Rebirth is however a very different title: better written, more ambitious, more varied in its themes, it benefits from all the know-how acquired by the Swedish studio over the past 14 years. Frictional Games is a studio apart in the world of independent video games: since 2006, this small Swedish structure has been committed to producing horrific experiences in the first person, while addressing complex themes, which lead us to question the human nature. Frictional has specially made a name for itself with the general public with Amnesia: The Dark Descent in 2010, then SOMA in 2015. 5 years later, here is Amnesia: Rebirth which, contrary to what its title might suggest, is not in no way a remake of the first Amnesia, far from it. Neither is it really a sequel or a "prequel", but a new story in its own right, which nevertheless takes up certain themes, including those of forgetting and sacrifice.

The opening of the game is, in this respect, particularly striking and recalls the first minutes of Bioshock through the eyes of the heroine Tasi Trianon, flying above the Algerian desert alongside her husband Salim, you will experience a terrible crash in the dunes. When you wake up and struggle to extricate yourself from the wreckage of the plane, you are alone in the desert, in the scorching heat. Very embodied by an excellent dubbing, the heroine will then go in search of possible survivors, hoping, in particular, to find her husband safe and sound. One thing led to another, Tasi will discover several mysterious places, between excavation sites and the remains of an antediluvian civilization. But in some dark tunnels, strange creatures seem to be on the prowl for the slightest misstep ... 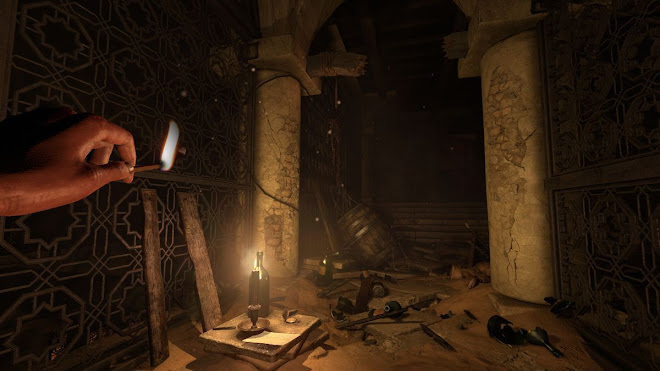 When the adventurers of the lost ark meet the decent

With Amnesia Rebirth, Frictional Games gives us its most “pulp” game, offering us an “Adventure in the 30's” atmosphere that Steven Spielberg would not have denied. Between the scorching desert, the exploration of a disused military fort, or the discovery of places on the fringes of the strange, the title is clearly disorienting. But if you were hoping to have a good time in the company of a Lara Croft wanabee, you might fall from above. Very quickly, the tone darkens and we understand that something is wrong with Tasi. She seems to be reliving memories of events that have already happened there: an expedition went wrong, a group of explorers torn by choices too heavy to bear, reminders of a happy family life with Salim. and their daughter Alys… So many elements of the scenario are told with great economy of means, but also with great efficiency. Each memory of Tasi takes the form of a beautiful charcoal drawing, accompanied by a few lines of dialogue. Even the loading times between each zone are an opportunity to learn more about the heroine's past through a very nice illustration. Along with this very intimate story is a purely fantastic plot, which it would of course be criminal to unveil here. Know, however, that Tasi's peregrinations will lead her to discover the existence of forces beyond her, unimaginable for any normal human brain. On this point, the Lovecraftian hints that were already widely perceived in Amnesia: The Dark Descent is present here on a much larger scale. It is also the moment to salute the incredible artistic work done by Frictional Games: at regular intervals, Rebirth offers us some Dantesque visions of an “other world”, with its green suns, its massive architectures, its esoteric symbols. and its mechanisms designed by engineers from another dimension. It’s hard to say more at this point in the test, as the discovery is so much part of the fun one gets to travel Amnesia Rebirth. Like SOMA, however, Frictional does an admirable job of tackling themes that are as close to the human as possible while providing a purely fantastic and particularly successful setting. 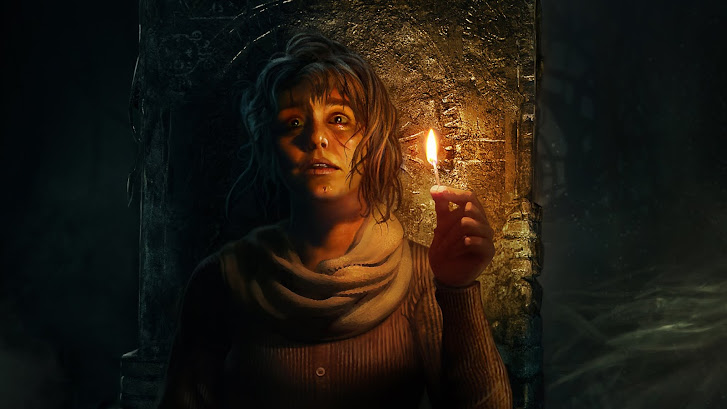 If you were a production regular at the studio, you will be a little surprised by the structure of the game itself. Fully playable in the first person and skipping combat in favor of infiltration and flight, Amnesia Rebirth recycles a well-known formula, but which still works, especially since it has been somewhat refined. The exploration is still very pleasant, with always the possibility of grabbing a whole bunch of objects to look at them from all angles. The progression thus alternates between the discovery of a new place, a few puzzles often involving "physical" manipulations ... and of course pure passages of terror. The latter is also particularly well brought and the first hour remains, in particular, a model of “teasing”, just making us see in the distance a stolen form, something crawling escaping into a hole in the wall ... to better put us the pressure as soon as things get carried away. The game also regularly delivers very good escape passages, quite scripted but well-staged, which accelerate a pace that is particularly well mastered. However, we can blame, in the end, some redundant enigmas that break the magic a little, especially since they occur at key moments of the plot when we especially want to know the end of the story. Still in the area of ​​reproaches, if the decorations are particularly neat with, in particular, lighting which greatly contributes to the atmosphere, the same cannot be said of the few human characters encountered during the adventure. Between stiff animations and questionable facial models, they find it very difficult to convince, especially at important moments in history when emotion is supposed to take over. We can of course suspect that the lack of resources is working against it (we are not in a Naughty Dog production), but these technical flaws tend to undermine the narrative ambition of the title, and that's a shame. That being said, it’s impossible not to salute, once again, the talent of Frictional Games, which manages to deliver a true exploration-adventure game infused with horror, with a particularly touching dramatic overlay. For 8 to 9 hours, we embody Tasi Trianon with pleasure and emotion, until a final scene, the outcome of which is left to the player. A choice, admittedly quite binary, but which proves to be difficult to make, as it questions us as to how our actions may or may not serve the good of humanity, to the detriment of our personal well-being. 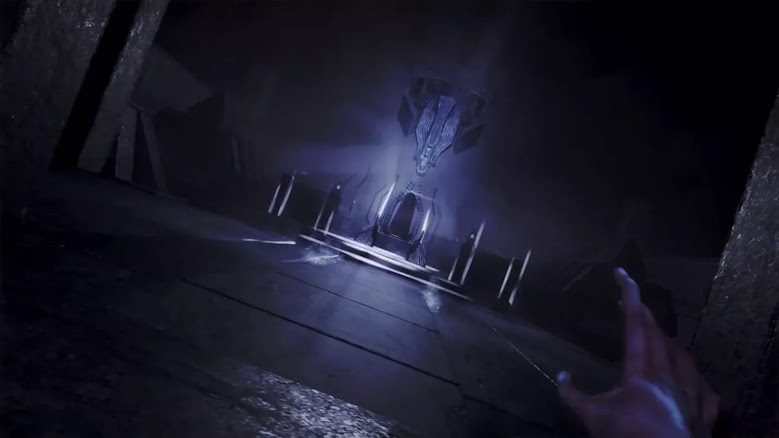 Frictional Games games are as rare as they are precious, and Amnesia: Rebirth is no exception to this rule. It is a journey filled with mystery and shattering revelations that the Swedish studio offers us, determined to jostle us once again. The title manages to mix genres (Indiana Jones-style adventure, pure horror) while dealing with extremely human and intimate themes. Far from being a "feel good" experience, Amnesia: Rebirth leaves a particular taste in the mouth, a mixture of sadness and admiration for a creative team who have decided to follow through. So yes, we can regret sometimes too many puzzles or not always convincing character models, witnesses of a limited budget. Small flaws inherited from previous studio productions, which weigh very little when it comes to taking stock. Far more subtle and ambitious than Amnesia: The Dark Descent, Rebirth lives up to its name. So why don't you visit the Amnesia: Rebirth official website for more information about the game. I hope you enjoy my  Amnesia: Rebirth review, please feel free to comment below.