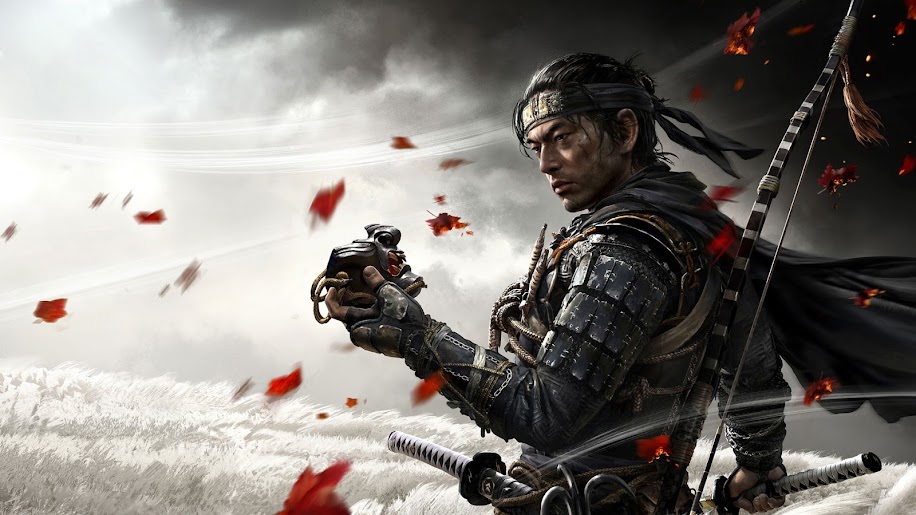 I don't even know if I could introduce this review by saying that just a few months ago, Ghost of Tsushima was a PlayStation 4 exclusive that almost went fail on the market. Lying in the shadow of the launch of The Last of Us Part 2,  this Sucker Punch's game only recently gained attention, following the release of a trailer. Fortunately, Sony had a good idea to advertise it as it should, otherwise, we could have missed a game that deserves great honors! 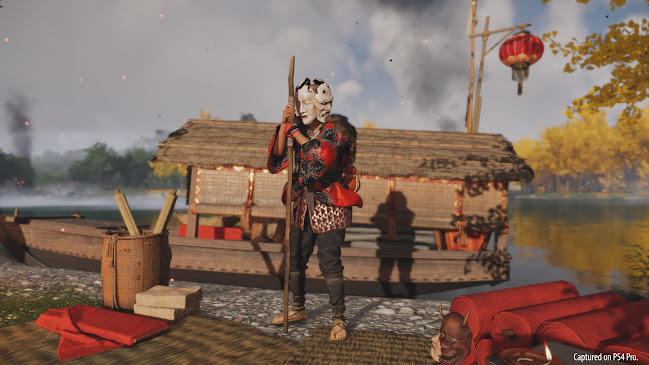 The phantom standing before the invader

Japan, 1274. Led by one of the descendants of Genghis Khan, the Mongols invade Japan, not hesitating to slaughter the Japanese people and set their homes on fire. The last bulwark against the enemy, the samurai unsuccessfully attempts to repel the invader. Defying death twice rather than once, unwillingly witnessing the capture of your uncle as well as the destruction of your island, you take what little courage you have left to challenge the Mongol forces and save your people. You are Jin Sakai. You are the ghost of Tsushima. From the first moments, we witness a real tour de force on the part of the Sucker Punch studio. Even if the latter admitted to having taken certain freedom with regard to the real historical events of the Mongol invasion, the fact remains that the research work was colossal in order to present some events and a world faithful to what they were at the time. Thus, in addition to following Jin in his quest, you will learn a lot about the habits and customs of the Japanese as well as the Mongols, allowing you to learn about the part of the history of these peoples. However, Ghost of Tsushima is more than Jin's story. It is also several interconnecting stories that demonstrate the suffering of the Japanese people in the face of the invasion of their homeland. Thus, throughout your adventure, you will complete quests in the company of legendary figures to help you in your revenge against the Mongols. However, you will also be called upon to help villagers and to be confronted with human tragedies. In the end, all of this builds a strong scenario that, at times, upsets us while accentuating the impression that we are somehow the last hope of our people. 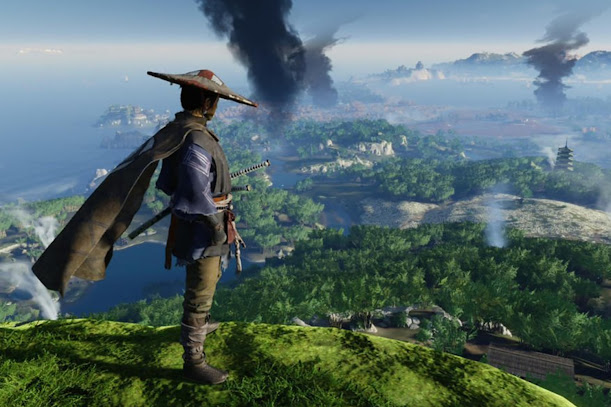 A game full of respect

Where Ghost of Tsushima threw me down is through the developers' respect for Japanese culture. Beyond a historical treatment, the game is a fresco depicting immense respect for the elements which are at the very basis of Japanese culture. Plus, you will see that nature occupies a predominant role in the game. Observation of the elements of nature will become intertwined with all aspects of the latter, be it fighting, your orientation in the world thanks to the wind as well. than birds, your attempts to observe the enemy, or the thoughts that Jin will bring about his life. For this purpose, you will be required to immerse yourself in hot springs in order to improve your character's vitality as well as to meditate on elements of his life. In the same way, you will be able to compose haikus, or small Japanese poems through which you will think with Jin while looking at nature. In addition, the visual of the game also reveals this respect for the beauty of Japanese culture. Ghost of Tsushima is splendid from cover to cover, not least because of the magnificence of its settings. You will navigate through sumptuous environments very different from each other, whether we speak of lush forests, fields of flowers, or even camps filled with mud invaded by the Mongols. No matter where you go, the game is breathtakingly sumptuous, proving that despite the atrocities to be seen in it, nature is stunningly beautiful. The soundtrack also testifies to this respect for Japanese traditions. Packed with flute sound effects, the music is spellbinding and adapts perfectly to any situation in the game. It can go from calm tunes to more pronounced tones, especially when entering combat. You will also hear a large number of musicians playing the flute or other period instruments through the villages and camps that you visit. In other words, like the visual ambiance, the game's soundtrack is sumptuous! 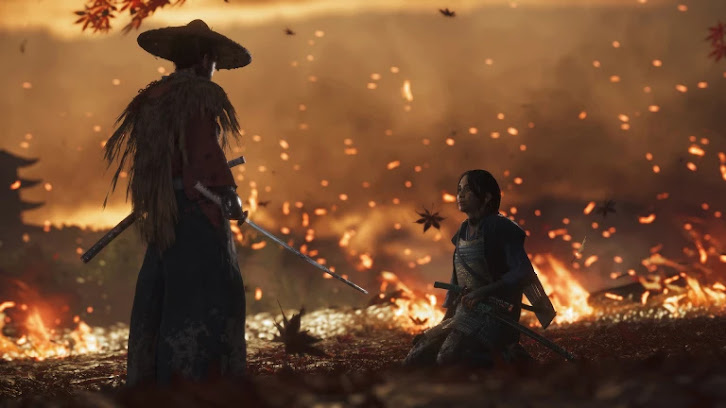 Inspired by other series, but unique to itself

Inspired by Assassin's Creed, copied from Sekiro: Shadows Die Twice, hints of developer inspirations have continued to spread since the game gained renewed interest from gamers. Now, what is it? Is Ghost of Tsushima just a bunch of ideas from other series or a game in its own right? The answer is a bit of both. Even though it seems small at first glance since it only takes place on Tsushima Island, the game is very big. Operating in an open-world style of play in which you will navigate through the three regions that make up Tsushima, the game will allow you to harvest a variety of resources along your journey. From food and steel to leather and bamboo, the resources will allow you to upgrade Jin's various pieces of equipment. Besides, while searching the houses, shelters, and other buildings present in the game, you will also find collectibles such as Mongolian artifacts, clan banners and even singing crickets. In short, the game is full of resources and items for you to get your hands on, encouraging exploration at the same time. Otherwise, you will have a multitude of points of interest to complete. In addition to Mongolian lairs, you will have several primary and secondary missions to accomplish as well as mythical tales to discover which will be done in the form of quests. In addition, by speaking with villagers, they can give you information on points of interest to search for. So the more you explore, the more you discover, and the more you discover, the more you will improve Jin by collecting better equipment as well as increasing his legend level. On the other hand, the world you will operate in will not be pleasant. Whether in the forest, on a road, or in a lair, the danger will watch you. For example, it won't be rare for an animal to spot you and decide to attack you. Likewise, bandits, Mongols, or mercenaries might appear and attack you. These attacks are not everywhere, but they will be part of your journey, so you will have to take up arms when the situation calls for it.

Note that the developers have made sure that this exploration can be done with the best possible fluidity. Thus, loading times are minimal and it is possible to make quick trips to any completed point of interest. Therefore, despite the size of Tsushima, you can go where you want when you want without having to endure endless journeys on foot or on horseback! 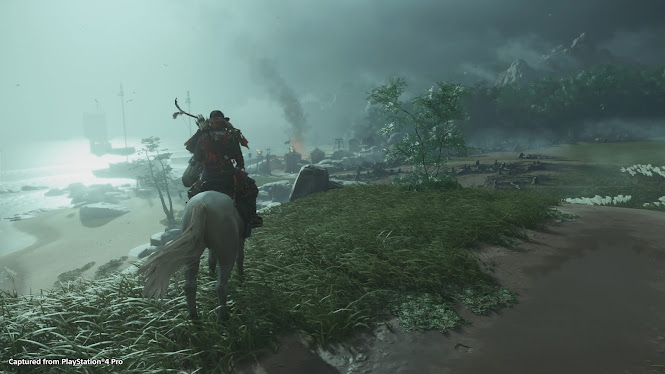 Three approaches to fighting to suit your style

At its core, Jin is a samurai. His code indicates that he must face the enemy without fear. While it is possible to attack opponents like a samurai, the game offers three ways of approaching slights, the brilliance of Ghost of Tsushima's design residing in the fact that one way is as effective as another, regardless of the danger we face, using very precise controls. If you choose to fight like a samurai, you will face dangers with your katana and dagger. As you progress, you will learn interchangeable poses in real-time that can more easily destabilize different kinds of enemies and make them vulnerable. Plus, you'll be able to summon an enemy from afar to face you in a duel, the challenge of bringing out their blade just before the opponent reaches you to kill them with one blow. Definitely my favorite, the samurai approach will make you a real killing machine, the challenge of knowing when to parry, dodge, and attack. The thief's approach is not noble but can be very effective. Basically, this is the stealthy way to kill. You can sneak into the grass, under buildings, and behind enemies to assassinate them or deal with critical hits. It's not dignified, but to avoid being surrounded, it's hugely useful! Finally, there is the path of the archer. Using one of your bows, you will be able to kill opponents from a distance, especially archers positioned high up. Highly effective, arrows will stab the enemy and can activate traps such as explosive barrels and wasp nests. They are formidable, especially when combined with thief tactics.

However, as I said, you can combine these approaches as you see fit, except for a few missions that require the use of certain methods. The game doesn't encourage one style more than another, so I've used them all at one point or another. It's up to you to determine what works best with the way you play, and how you want to improve Jin's techniques and gadgets as you gain experience and refine your legend! Note that despite everything, some bugs are present, although they are not that disturbing. Additionally, we may occasionally encounter collision bugs that prevent us from seeing part of an enemy or our character. In addition, it is not uncommon to see opponents showing great silliness. For example, go for a run or hide quickly and you will find that an enemy will forget you as if you were gone up in smoke, even when he is a few inches away from you! Although they are often anecdotal, we still notice these problems from time to time. 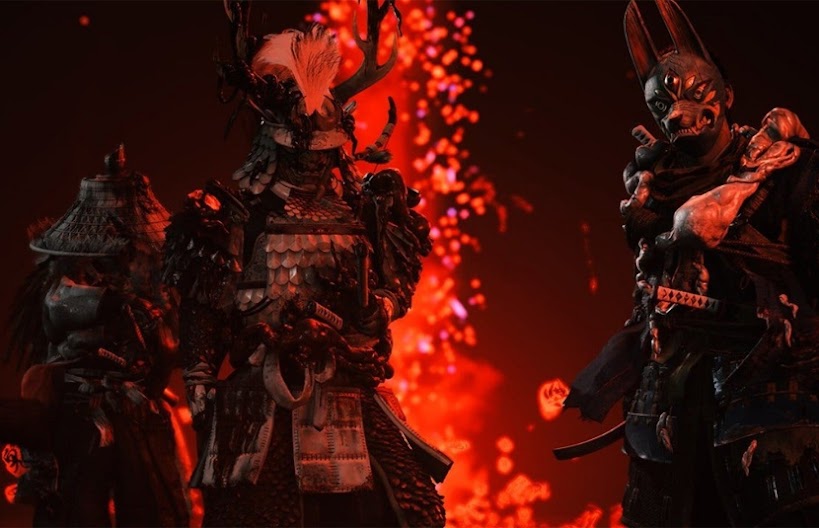 To be honest, I was like many players since Ghost of Tsushima wasn't telling me anything just a few weeks ago. But today it ranks among the best games I have played in 2020 so far. Despite a few bugs, often anecdotal, it is an adventure of very high quality that is offered to us, imbued with a respect for a culture such as I have rarely seen in video games. I recommend Sucker Punch's latest title with your eyes closed, as Sony has just added another major exclusive to its 2020 lineup!  The latest from the prolific studio Sucker Punch, Ghost of Tsushima has risen among the exceptional games thanks to rewarding exploration, exhilarating combat, and undeniable respect for Japanese culture! If you are interested to learn more about the game, make sure you visit the official website for all details. I how you like this review, please feel free to comment below. Have a nice day.