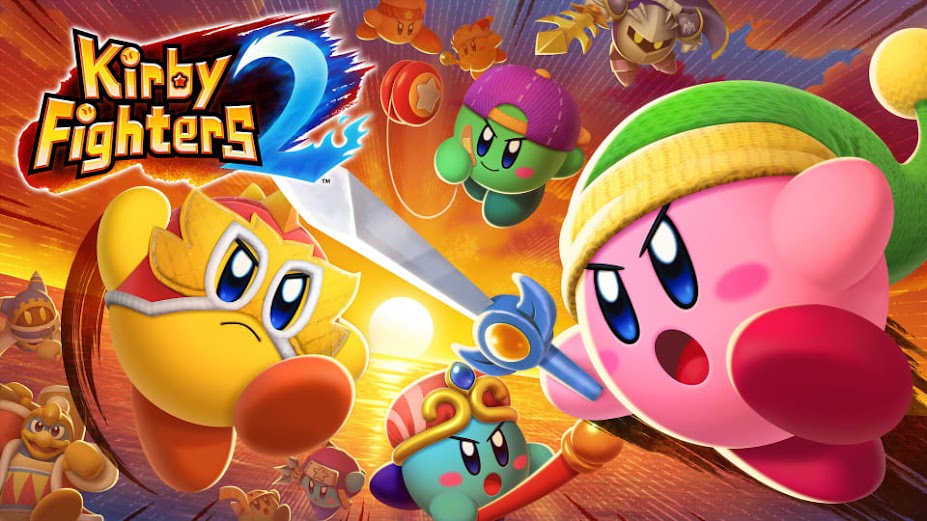 Kirby and its rivals!

When the player turns on his console and starts the famous game, he will come across a classic menu, but rather pretty. Several options will be available to him: combat mode, online or locally, as well as story and solitaire mode. Let's start with the one that many will begin with: the story. You might say, this player is a Kirby, so the story is simple, perhaps too simple, for some: “King Dadidou and Meta Knight have opposed Kirby many times, even going so far as to ally on occasion. In order to defeat Kirby once and for all, the lifelong rivals decided to form a duet and sent a letter to Kirby to challenge him! Perched atop the duet battle tower, a tower so high it reached the heavens, they stood firm for Kirby. Kirby did not understand anything from their letter ... which did not prevent him from finding a partner and opening the door to the tower! So began the fight between Kirby and its eternal rivals. ". 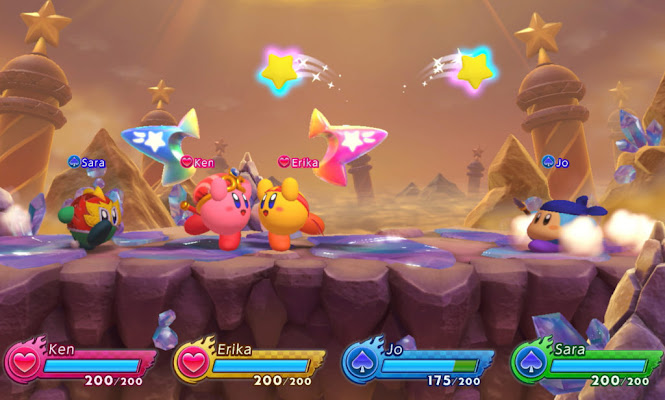 After this tirade worthy of the greatest (we are not kidding), you will start your first fights in story mode. Kirby Fighters 2 is therefore a Super Smash Bros. It does but in a much more lite version. First of all, you're going to have to choose a character, and surprisingly there are only variations of Kirby, or almost (note that the story is possible with two players). All the powers of the pink hero are available in a good fifteen characters. Then, you will have to choose a partner (duet fight, if you have followed correctly…), like Bandana Waddle Dee, one of the rare characters who is not Kirby himself! It will then be possible to choose any character as a partner, even another Kirby. The duet fights are also the big new feature of the title, compared to its elder (Kirby Fighters Deluxe). It's time to storm the tower. The game is split into four separate chapters, and a bonus, the ultimate challenge. Each will present itself in the same way, a tower to climb, each floor representing a fight. Between these, you will be able to improve your characters with items such as living stones, attacks, healing, defense, etc. It will be necessary to choose what to increase, in order to be as efficient as possible. If you ever die, you'll reincarnate as a ghost, and have the option to come back if you hit an opponent, unless your partner dies first. 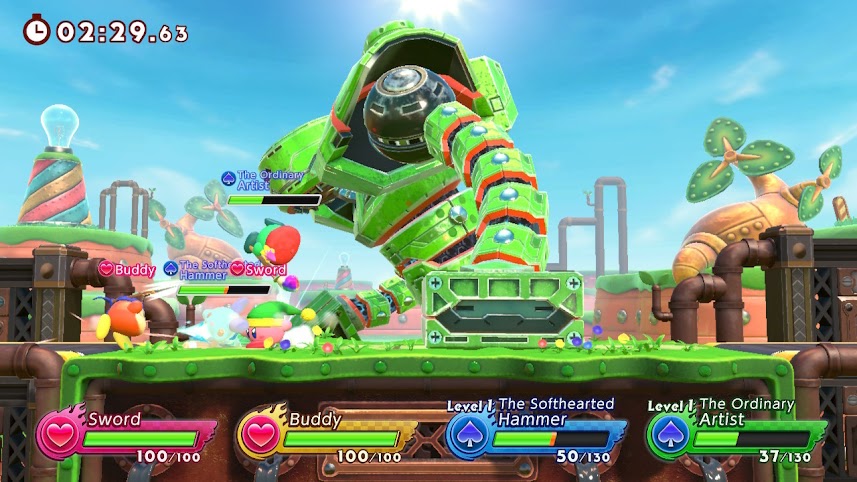 Along the way, there will always be a mini-boss like the Giga Lames, and at the top the bosses, King Dadidou, and Meta Knight. In total there are three different mini-bosses, and absolutely always the same boss. Even though the pattern changes each time, it's downright boring. The feeling of filling is very strong, and once the story is over, the ultimate challenge doesn't help. A fifty-story tower with all the mini-bosses and of course King Dadidou and Meta Knight at the key. Even if the difficulty is clearly noted, it is far too long for so little. Indeed, the fights are not really interesting, not to mention that between each there will be a load (so fifty loads for the last turn). The overall gameplay is copied from Super Smash Bros., but much less deep. In addition to some funny objects like the mint leaf, forget about ejections or large stages. You will be entitled to the classic simple or charged attacks, jumped or dashed, oriented or not, as well as about twenty different levels. It will also be possible to perform parries and dodges, but little more.

The solitary mode offers let you survive against the clock. The goal will be to complete several stages on your own until you reach the boss, Dark Kirby, as quickly as possible. Every time you die, you waste time. The combat modes, online or local play, basically offer the same thing, namely versus up to four players, online, locally, or on the same console. A practice mode is also available, but the usefulness is very limited, except for testing a character before embarking on another game mode. Finally, in order to unlock new objects, characters, or stages, Kirby Fighters 2 embeds a rank system, called Combatant Rank. Anything you accomplish will increase it, up to level one hundred to get everything. A percentage system will also be present for those who aim for the hundred percent. But that can be long and off-putting because even by finishing the main story (so without the ultimate bonus level) you will be around thirty percent. The lifespan is therefore correct, but not necessarily interesting. 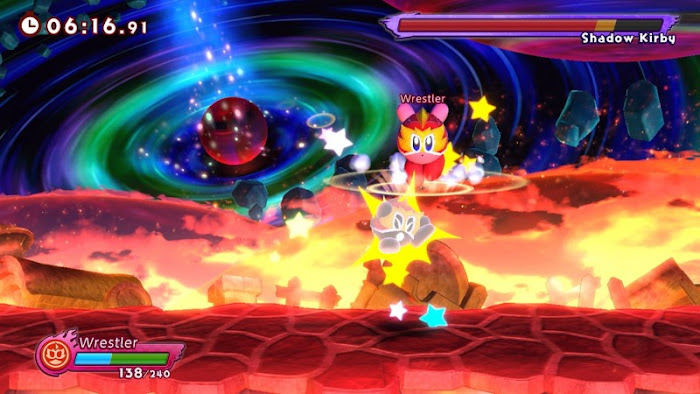 The graphics are nice, clean, smooth. The courses, despite their smallness, are generally successful and lively. The title's overall design takes advantage of the charm of the Kirby license and is quite pleasing to the eye. In addition, the fluidity during the fights is perfect. The traditional Kirby music will always be just as effective in boosting you up, and the new versions are just as well done. Without being exceptional, Kirby Fighters 2 is first and foremost made for fans, and it shows. The feeling of playing a Smash Bros. lite version is impossible to avoid. This gives a fairly simple title, but also effective in its genre. However, I regret the lack of depth of the gameplay. The story is admittedly simple, but that's not what is required of a game under the Kirby license. Kirby Fighters 2 is sure to speak to fans of the pink ball but will remain very limited unless you don't have Smash Bros at home. So make sure you grab it or if you need more information, please visit the official website for more details.