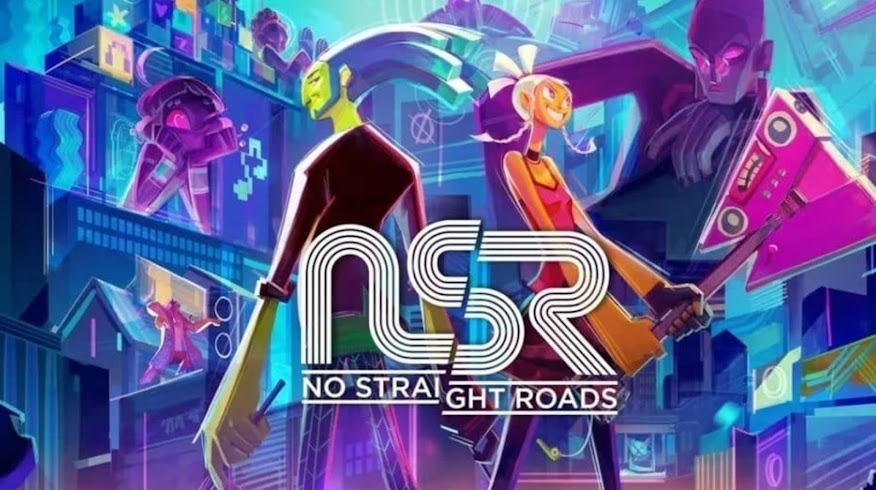 3 years after the start of its development, No Straight Roads finally arrives in our regions with a promise: that of discovering a world full of references that it intends to make coexist to create its own original universe. In a world dominated by EDM, an indie band by the name of Bunk Bed Junction is here attempting to overthrow the existing power to restore the rock voice to Vinyl City. A scenario as an excuse for this action/adventure title centered around rhythm and music, which we had been able to try a little over a year ago in the context of two boss fights seductively by their visual approach, sound, and handling. But what about the “adventure” dimension of the title, which is supposed to allow us to explore the city?

No Straight Roads is obviously not just a series of rhythmic clashes, as each sequence of this type is interspersed with exploration passages in the town of Vinyl City. You play here Mayday and Zuke, the two members of the group Bunk Bed Junction who come to try their luck on the show Lights Up, hoping to convince the famous jury of the show. The winners are then likely to join the corporate structure of NSR, which then takes care of supplying the city with energy through concerts. But in his desire to win with a rock sound, Bunk Bed Junction will face the domination of EDM (Electro Dance Music) on the current scene and find himself ejected from the competition with the added bonus of a ban on rock at the level local. A disruptive event that will push them to launch a revolution against NSR by seeking to sabotage the concerts of its main members. 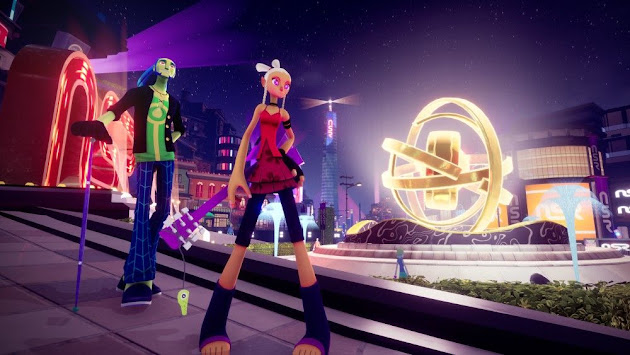 Rather basic, the story, unfortunately, struggles to take off because of a too predictable character, on the one hand, the few twists of the title being very easy to anticipate, and frankly uninspired dialogues, on the other hand, the characters are thus proving to be very caricatural. The existence of other languages dub is to be welcomed, even if the title regularly suffers in these languages from particularly important lip synchronization concerns, the voice sometimes stopping until one or two seconds before the lips of the model of the character in-game keep waving. The scenario to have you topple the musical leader of every part of town has the good idea to logically lead you to boss fights and allows you to explore the different biomes of Vinyl City, but it comes with 'an important defect: a routine structure.

Concretely, after being briefed by a certain Kliff on how to beat the next artist, you will have to go to the district concerned by crossing part of the city, approaching the location of the concert, and then crossing the various security zones by eliminating a series of mobs before being confronted with the local boss… Then to return to the HQ and start this loop again half a dozen times in the adventure, which turns out to be a bit repetitive and predictable in the long run. The exploration of the city turns out to be disappointing at first glance since the first districts are quite poor in discoveries, content to disperse randomly qwasas to recover (which allow to repair areas and thus rally fans to your cause) and some objects accompanied by a small description technically providing nothing more. Once the double jump and higher-level item transformations are unlocked, a few unreachable spots and hidden doors will still add some density to the whole thing, but this dimension of adventure remains the most forgettable overall. 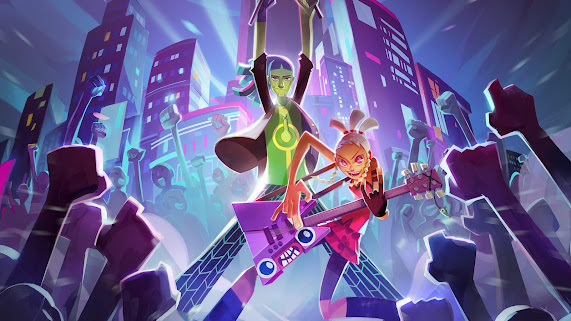 The spirit of the beautiful boss

Fortunately, the heart of the game is more convincing, with boss fights at the forefront. While the title takes the form of a third-person action game with a few platforming elements when exploring the city, it offers other references for the rest of the time. Thus, the visits to the HQ are an opportunity to work on its skills, which are unlocked according to the number of fans collected, but also to use the stickers found in the field to provide passive bonuses to the characters or change the skills attributed to your heroes. On a more "action" dimension, the sequences leading up to the boss fights require you to cross several areas where you will have to get rid of a series of robotic NSR soldiers. The whole in a visual and sound environment always very neat, and sometimes very pleasant to cross (like the passage preceding the fight against the 1010), which alternates between platform and combat.

But the real greatest success of the game comes from these famous boss fights stated above, always very varied in terms of approach and soundtrack, each enemy bringing with its own style or its favorite musical sub-genre. Our hearts are inclined towards the first boss or the fight against Yinu (playable in the demo of the game, if you want to try it), but the others certainly do not have to be ashamed of their performances. They always manage to deliver unique sequences, also exploiting certain elements of the soundtrack to force you to match the rhythm of the attacks. If his musical world is reminiscent of Jet Set Radio, it is more in the approach of Mizuguchi's games that these fights come here to draw, through their ability to marry the action controller in hand to the soundtrack that is played in the background. 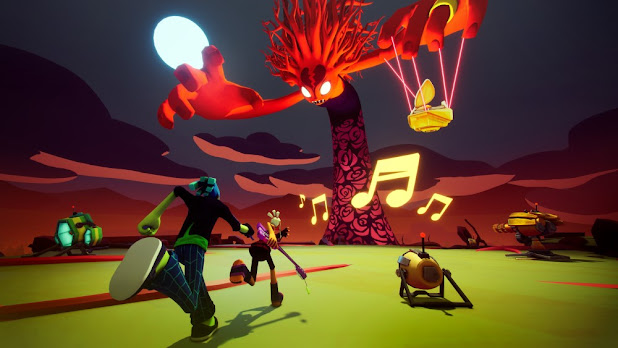 Facing the enemies, you will thus be led to attempt parries against the strikes that it is possible to return against the enemies (symbolized in purple), but also to shoot from a distance with the musical notes serving as “ammunition” and which appear from time to time on the ground, strike melee, exploit potential combos if you have unlocked the appropriate skills, transform an inert object into an offensive turret or a defense tool ... Not to mention the possibility to switch at any time d 'one character to another, each with their own style and skills. A range of actions varied enough to make the fights interesting. Despite their qualities, some of these clashes - in particular the second - can still turn out to be messy in some sequences because of the large number of elements displayed on the screen and the fixed camera system offering no flexibility to the player. : under these conditions, the 2 player mode has the merit of making your job a little easier. Two brains are sometimes not too many to deal with the large number of attacks to deal with at the same time, although in the overwhelming majority of cases No Straight Roads remains perfectly readable and intuitive in approaching its boss fights.

After completing some fights and completing the game, you will even unlock other ways to replay them: through the use of an alternative soundtrack for example, through the passage in difficult mode, the approach mode which allows as for him to also replay the phase preceding the combat, or the parade mode which eliminates the possibilities of using ammunition to add more attacks that can be parried and countered. Our Straight Roads is quite generous and allows us to compensate for the rather short life of the adventure - 6 to 7 hours, perhaps a little more if you are looking to recover everything and succeed in the fights with the maximum note. - while relying on what makes its greatest strength, namely its battles. A rather wise choice, which leaves us on a final positive note when it comes time to take stock. 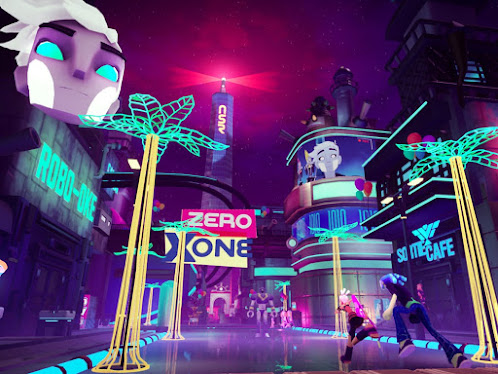 Impeccable on its soundtrack, offering some inspired boss fights and really enjoyable to play, No Straight Roads is so convincing in its core game, except for a few readability concerns during more heavy clashes visually and soundly. On the other hand, it is much less convincing about its adventure, whose very routine structure and writing that is both predictable and uninspired - I will think especially of the dialogues - do not manage to offer a setting that lives up to its game mechanics.  No Straight Roads has the merit of having treated most of its experience and offered a little replayability, which should at least convince fans of the genre to give it their attention. If you would like to learn more about this game, well you can still visit the official website. No Straight Roads is available for PC and major game consoles as well. Enjoy!