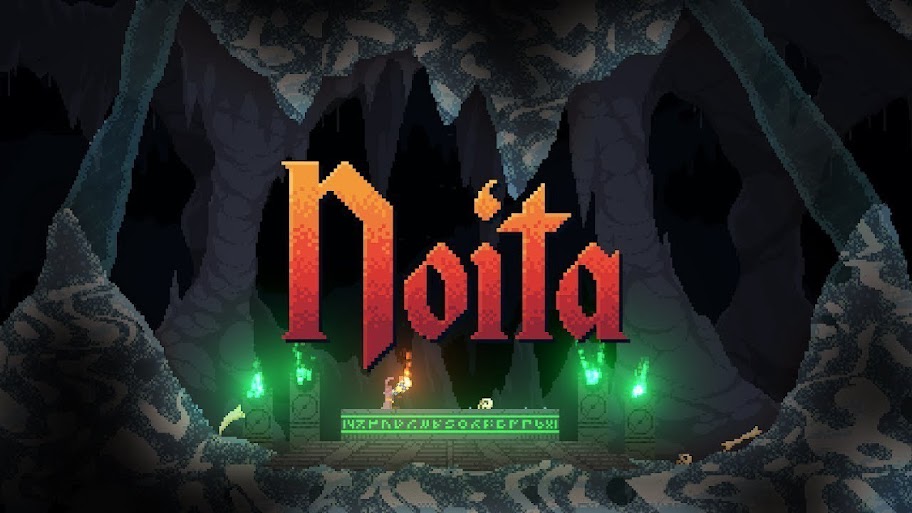 A true game-world, this little brother of "Spelunky" pushes simulation so far that it manages to make people forget that there is a creator behind the creation. A year ago, after spending twenty-five hours on a working version of Noita, it seemed clear to me that it was, already as it is, one of the best games of the year 2019. Version "1.0", that is to say, a priori definitive is available since October 15 on PC and confirms us in the idea that it could also be one of the games to remember from the year 2020. Brilliantly unpredictable game and yet obeying very precise physical rules (those of our world), a fascinating blank page stretched as much to the explorer as to the alchemist in us, Noita in version 1.0 is still as stunning as it was a year ago. Let's just add that it has since been enriched with many new magical effects with which to tinker, new segments of the world to visit, and new wands (like the formidable and almost too powerful ones that cause a bonus effect with each shot) with which ones to have fun. No major graphic improvements since 2019, however, apart from a few background decorations which enrich certain areas that are a little empty.

One regret, however: a year ago, Noita gave us the impression of a game with perfectible balance, so much, from one game to another, it could prove to be extremely pleasing or terribly difficult, the player being dependent on the goodwill of the procedural generation of the world, with each part renewed. We hoped that this defect would be corrected, and unfortunately, this is not so much the case: from one game to another, we can very well come across a few overpowered wands, promises of two or three hours of fun, or chain the wrong picks. Noita took his time: now he's asking us to do the same. So I  played twenty-five hours at Noita, and I have actually barely scratched the surface of this game-world, co-created by the head of the brilliant Baba Is You. Just enough to go beyond appearances and get a glimpse of its potential. Released in early access (that is, it will probably see countless more updates) on PC on September 24, Noita, at first glance, looks like a little Spelunky. If we reduce it to its very essence, that is what it is: a reinterpretation of this independent game so important that, eleven years later, the creators are still dissecting it to understand its genius. As in Spelunky, you play an adventurer (well, in this case, a witch) who sinks deeper and deeper into an underground maze as dangerous as it is unpredictable since it is procedurally generated in each game. I sink, while being permanently torn between two temptations: that of rushing towards the exit while avoiding danger, and that of facing it, even at the risk of losing my life, synonymous with a return to square one. . Because it is by taking risks that I find the new wands and new items that prepare us for the enemies to come, even more threatening. 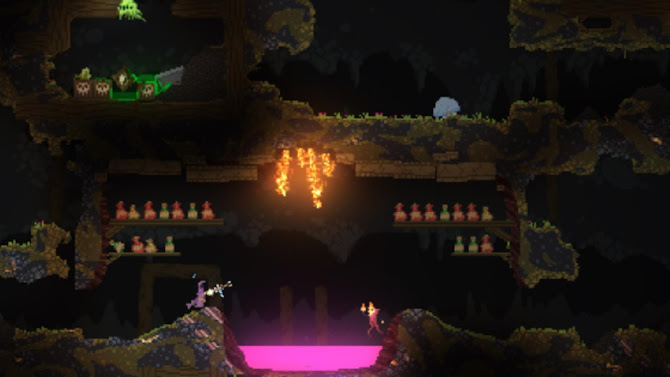 These chopsticks are Noita's first peculiarity. Able to shoot, or to recharge, more or less quickly, they also embed a lot of different magical effects, from the possibility of making it rain to that of throwing lightning, fireballs, poison, and dozens, maybe even a hundred. Millions even, if we consider all their variations, since between two levels we can combine the effects of rods found along the way to, for example, make a weapon capable of creating an ice bubble, before filling it with water and then run an electric current through it. and this is where Noita goes from effective to exciting, each pixel in the immense playing field has the physical properties of the matter it represents. I could even talk about the properties of the earth, the acid, the different potions, the mud, the gases, and so on, but let's keep it simple: water for example. It sinks, evaporates on contact with lava (which it turns into stone as it passes), condenses before descending into the rain. Water also conducts electricity but also sets off fires on contact with acid. It even soaks the heroine's dress or enemies' clothes, making them more susceptible to some damage, immune to others. With a wand and explosions, we quickly find ourselves causing fires, digging galleries in all directions, melting montages of ice. 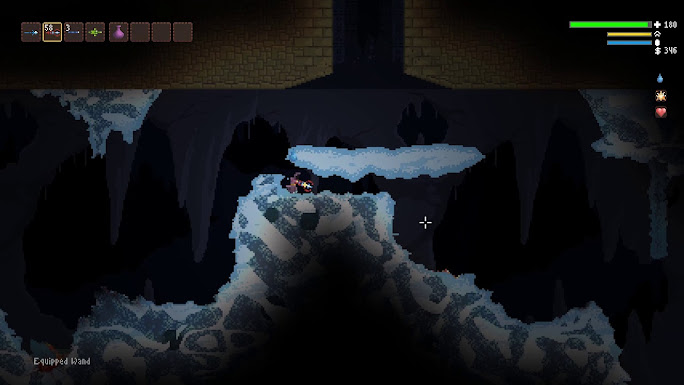 A "game without a creator"

We were talking about a game-world: Noita has this great thing that, because he pushes simulation very far, he gives the impression of being a real small autonomous universe, which exists by itself in the recesses of our microprocessors, without intervention from the outside world. It can moreover quite exist without the player, while the monsters which inhabit it fight against the rats which swarm there, the stray bullets going to be damaged on barrels of gunpowder, which, while exploding, dig sometimes craters underwater tables, cause floods, the death of enemies, the birth of a flora which waited only for that to start to push. Noita even gives the impression, the illusion anyway, of a game without rules, without artifice. Almost, in fact, a game without a creator. Generated procedurally with each game, the details of its levels are not known to anyone beforehand, including their brilliant developers. At the start of each game, the player is faced with a blank page - or rather a blank card - where everything remains to be discovered and where all means are good to achieve it. No mushrooms to collect, ammunition to collect, or other artificial elements of video game grammar: Noita starts from the premise that if something is possible in real life, it is also possible in-game. 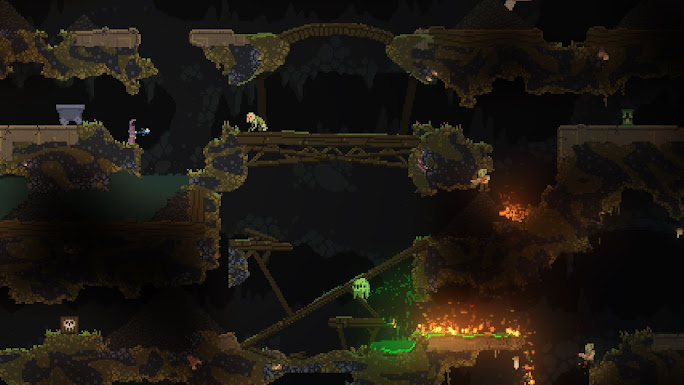 This freedom is all the more intoxicating because there is no clear purpose in Noita. Of course at the start, as in Spelunky, we have the temptation to want to go deeper and deeper, to go beyond the mine environment to reach that of snow, then to go beyond the snow to go as far as the abandoned factory and to continue thus, willy-nilly, towards a sort of inaccessible vertical resolution to adventure. And then, suddenly, you remember that you can do anything in Noita. That there are no other limits than those of physics. And that if you can dig down, there's no reason you can't dig to the side. Forget the world: then there is a whole universe open to us. A gigantic universe, all in one piece, with layers of levels, but also levels next to the levels, levels are hidden behind a wall, stashed at the end of a cave. Levels on the surface of the world too, lakes to cross, deserts to walk, where pyramids full of mystery await us - and obviously full of dangers. There are stone tablets that we do not yet understand the use of, or orbs conferring terrible powers ... After twenty-five hours, we are there. Having more or less understood that there are secrets under our feet. To have more or less identified the limits of the world on the horizontal plane. And slowly begin to envision that there might also be, perhaps, things to be discovered above our heads. 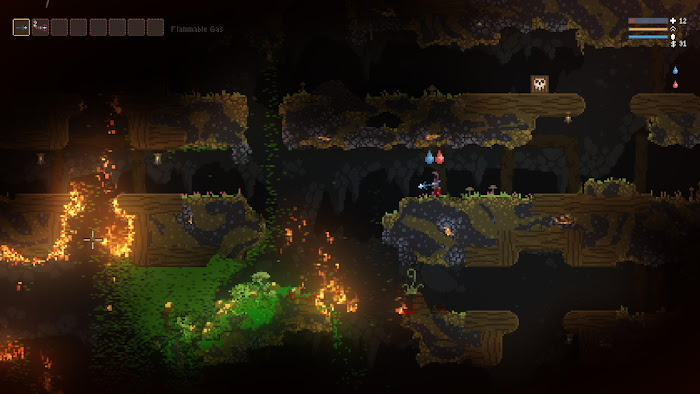 Well honestly I like the game, Noita is a challenging exploration game a la Spelunky; a fantasy come true for players who don't like to play by the rules of the game; a game world that one could spend a lifetime discovering. However, I felt that it's too bad that there are only twenty-four hours in a day, which prevents me from playing as much as I would like. I recommend that game if you are a fan of Spelunky; or if you are a descendant of Marco Polo; or if you are a cousin of Harry Potter :). Finally, it is not for you if 2D art put you off; or death frustrates you; or you prefer to wait quietly for the release of the final version. If you need more information I recommend you to visit the Noita official website for more details. I hope you enjoy this review, please feel free to comment below. See you next time.