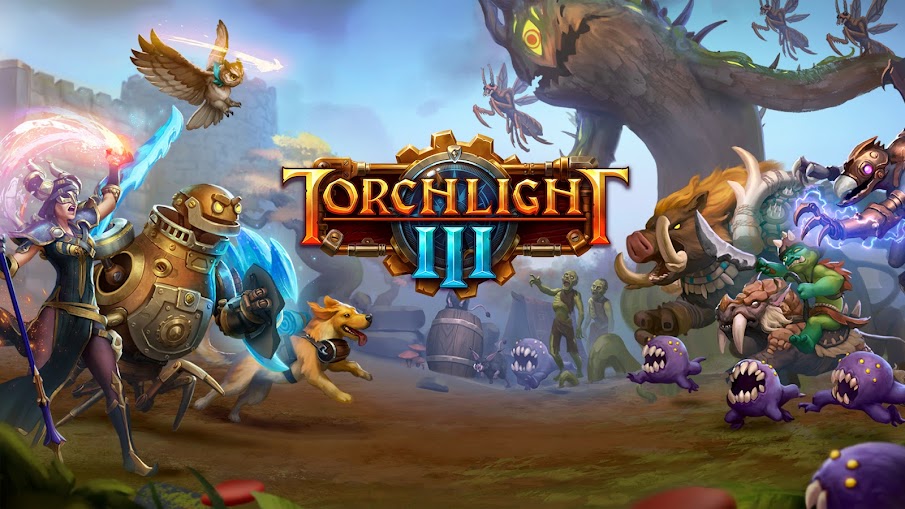 After having abandoned the idea of ​​a free-to-play, the studio Ecthra Games is trying to make Torchlight III the worthy successor of two very good hack'n'slash from the years 2000 and 2010. Available in early access recently, does the title manage to rekindle the flame? Nothing is less sure... Torchlight III is currently available in early access and should also evolve in the coming months. We will follow updates to the title and modify the rating accordingly.

Torchlight III is a complex project: after the success of the first two episodes, his studio Runic was unfortunately forced to close, but a new structure was then born, called Echtra Games. This young studio made up of former Runic players, then set about transforming the license into free-to-play. The Torchlight Frontiers project did not last long, however, following very poor feedback from the press and players. Now Torchlight III, this new hack 'n' slash has been available for early access on Steam for a few days. On the content side, we have entitled to four playable classes as well as two acts out of three. At first glance, a generous title when at the moment it is only partially playable. But, as you will see, Torchlight III currently lags behind a lot of casseroles, both technical and conceptual. Spoiler, therefore: if you hesitate to spend 30 euros to access it, wait a few more months. 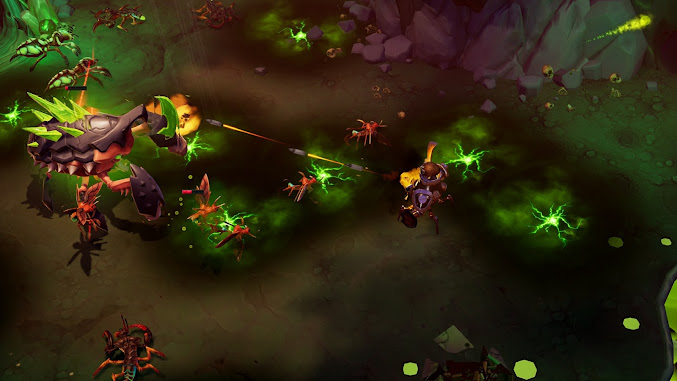 Let's remember some basics for those who are not familiar with the license: Torchlight III is a pure hack'n slash, in the tradition of a Diablo or a Path of Exile. The first episode, released in 2009, was clearly inspired by Diablo 1, Torchlight II (2012) paid homage to Diablo II. This third episode, for its part, therefore navigates in known waters, while trying to offer some originalities that distance it from these predecessors. Let's start with the good ideas: classes. Without being all perfect, they offer a good variety of fighting styles while building on interesting concepts. The Forgé, for example, is a robot with a very steampunk design, which trades its mana gauge by a pressure system, like an old boiler. If the gauge goes up too much, you can't attack anymore, but then it is possible to release the pressure with a devastating attack. The Forged also has a machine gun on its chest, which allows it to spray generously on enemies. We will quickly opt for a style of play "at a distance", with some explosion effects specific to the pressure system. Let's be clear: Forged is possibly the most fun class to play in Torchlight III. But I also like the combat-oriented archery shooter, which is more classic, but which requires a little subtle management of the arrows. More original, but less exciting for my tastes, the junkyard has the power to summon ... a train and the rails that go with it. The latter will then fight alongside us, in addition to the familiar classic that accompanies all classes. Finally, the Twilight Mage uses his spells from a distance, in more standard gameplay. While the classes in Torchlight III are, on the whole, successful, I regret that they are pretty much all made for ranged combat. The Forgé could potentially double as a tank, but the lack of melee impact feel makes the set far too soft. So it lacks a real melee class, like a Barbarian or a Paladin. 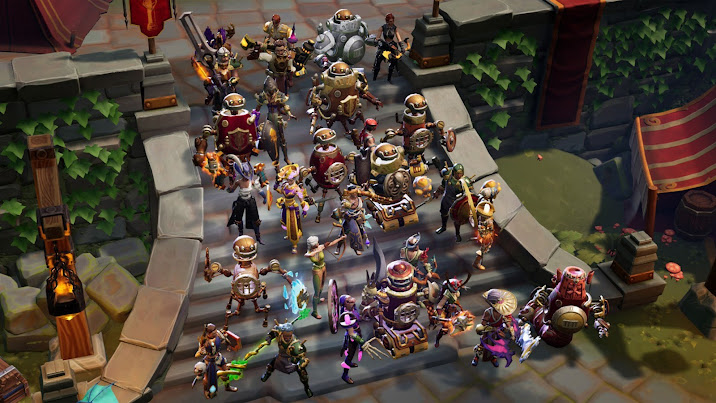 AN AMBIANCE THAT WORKS WELL

Another successful point: the colorful vibe and light tone always works well and contrasts nicely with most another hack 'n' slashes, which often take themselves a little too seriously. In terms of the scenario, however, we should not expect anything, but we are not here for that: an ancient evil is reflecting on the land, Goblins have invaded the region ... And that’s about it. Visually, the title is certainly quite clean, but the artistic direction catches up with an unimpressive graphics engine. The first act, in particular, puts on an almost parodic “piracy” atmosphere that works well. The animations of the enemies and in particular of the tribe of Goblins are also very successful. Enemies often swarm over us as we leave houses or any hole, giving us a little “swarming horde” feeling. On the level-design side, we unfortunately cannot be so positive. If you were hoping for large areas to visit, filled with mysteries and dungeons to clear, you will be somewhat disappointed. Here, a succession of medium-sized and above all extremely labyrinthine areas awaits you, where the room for maneuver is often low and where you spend your time getting lost. The fault, also, with a mini-map which lacks readability and which, for some unknown reason, can only be displayed in superimposition on the screen when my character is stationary. I also spend too much time stopping and pressing "Tab" to find my way around before heading back to the next waypoint. This navigation concern is only one fault among many others and Torchlight III has more or less forgivable faults. I am certainly aware that the game is still in early access, but certain game design choices leave room for doubt and seem to bear witness to the “free-to-play” past of the project. The Fort system (a customizable "own" place), for example, has very little interest as it is and requires the player to farm resources in the chain in the levels (wood, gold, stones. ) in the hope of being able to build a wooden bench (which is useless). However, some structures allow you to gain power, by spending specific resources, but it's hard to see the long-term value of this aspect of the game. 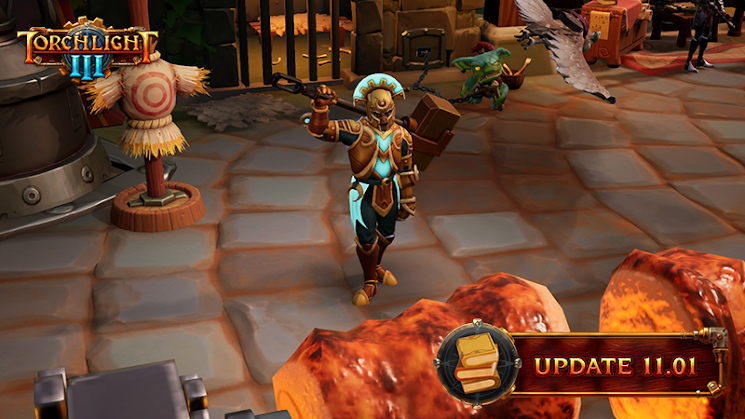 NOT A GOOD HACK 'N' SLASH YET

By skipping the Fort and focusing on what the title is supposed to do best - that is, allow me to slay enemies and loot increasingly powerful equipment - again, Torchlight III fails to fully fulfill its contract. The enemies are visually successful, but not very varied (you will overdose on goblins in act 1 and indigestion on insects in act 2), while the loot is generous in appearance, but too rarely interesting. But the worst comes from the progression in the quests, which cause aberrant back and forth in empty areas or areas populated by enemies that are 3 or 4 levels less. This is due to a lack of teleportation points, which forces the player to go back to finish exploring a low-level area. And that's of course without counting the many bugs, related to its early access state, which teleports me to the wrong area. For example, after having beaten a boss, we have changed areas and, after a loading time, found ourselves in an area at the start of the game. I then had to teleport quite far from our quest objective, obliged to cross at least 2 empty levels to be able to advance. 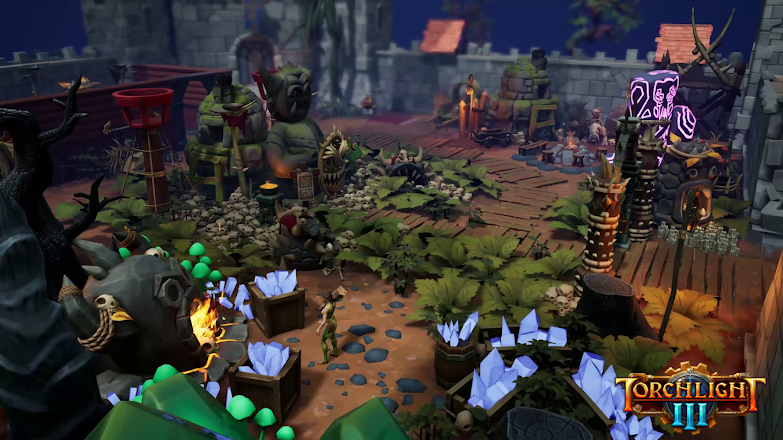 MANDATORY CONNECTION, BUT WHAT FOR?

Unfortunately, the bugs are also numerous in Torchlight III: between the random disconnections (partly settled at the time of writing the review, but still present), the immobile enemies, the half-finished translations, the teleporting errors… So many technical concerns that 'It is advisable to procrastinate given that we are, we recall it once again, facing a game in early access. What is less excusable, however, is the very philosophy of the title, which currently requires me to log in to play, but which absolutely does not encourage group play. Almost no social tool is thus present. I can just see the players nearby to suggest they create a group, but without having the slightest information about it: we do not know their level or the difficulty in which they are playing. As it stands, playing with several people also requires you to organize yourself beforehand and, for example, to contact each other via Discord (the Torchlight III channel is thus a good meeting point). It feels like we're back in 2005 when World of Warcraft debuted. In solo, the title remains playable, but it will be necessary to deal with a difficulty still in breaking-in. If you are a little used to hack 'n' slash, I advise you to start at least in "difficult", the "normal" level being really not very exciting. But even in this mode, you will have to deal with very, very many bosses that turn out to be mostly HP bags and also tedious to take down. Come on, let's be optimistic and hope Echtra Games fixes all of these balancing issues in future updates. 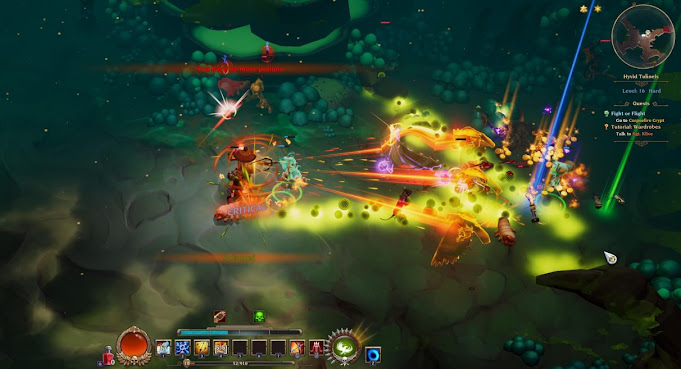 Unfortunately, this early access for Torchlight III is worrying. You can override bugs, connection issues, translation errors, or even difficulty balancing. But certain structural rules of the Echtra Games title mean that it will be difficult to raise the bar entirely. The game remains to be watched, however, if only at a glance, as it offers some fun classes to play and a great atmosphere while remaining very accessible for beginners in the genre. But, as it is, you are advised to stay away from it. For more information, please visit the Torchlight III official website, I hope you enjoyed the game review, if you have any comment please locate the form below, and let us know about what you think about the Torchlight III video game.

Turrican Flashback Review - A Light Compilation For An Exceptional Series

February 09, 2021
Shaped by Manfred Trenz and the Factor 5 team on behalf of Rainbow Arts , Turrican is one of the most iconic series of the early 1990s. Mixing the mechanics of a Metroid with those of a run & gun, the title born on Commodore 64 and Amiga has forged an excellent reputation among fans of the genre. Strikingly beautiful on release, the game was noted for its edgy gameplay and exceptional Chris Hülsbeck soundtrack. While the two Turrican Anthology compilations should arrive in the coming weeks (they are in advance on the Strictly Limited site), ININ Games is taking the lead with this Turrican Flashback . Bringing together four episodes, it is available on PlayStation 4 (PlayStation 5 compatible) and Nintendo Switch and will bring back fond memories to those who roamed the Alterra colony three decades ago (for rejuvenation, it's a gift ). However, we would have liked the compilation not to be limited to 4 games and a few filters ... Turrican , what's that name? If you have no
Post a Comment
Read more

February 15, 2021
With more than 3 million copies of Persona 5 sold worldwide, it was clear that Atlus would exploit the vein to the end. Thus, after Persona 5 Dancing Star Night and Persona 5 Royal , the publisher has decided to go further by offering a real sequel to its cult RPG, but through a genre that changes in favor of the "Warriors" style of Omega Force, the situation is totally explosive for the fans as the game has to live up to its illustrious prequel. What about the European version on PC? Atlus promised us and the publisher kept his word. Persona 5 Strikers offers French subtitles, as the "Royal" reissue of the previous episode, which makes it easier for French-speaking players to understand the plot. Fans and even neophytes of the Persona 5 series can thus discover the rest of the adventures of the Phantom Thieves in the best conditions. Also, English dubbing, in addition to the Japanese one, completes a very good localization job. No major translation errors or e
Post a Comment
Read more