DiRT 5 Review: Our Impressions On This First NEXT GEN Game

Announced at the Microsoft conference on May 7, DiRT 5 was relatively discreet with a small trailer where we did not see much. Codemasters have rectified things since, in particular by multiplying the press releases which made it possible to know more about the ambitions of the game. If Forza Horizon and Playground Games seem untouchable in terms of content and freedom of action, the British developers have opted for a slightly different path by favoring a high-level graphic rendering, as a slightly more narrative epic with many headliners on the program as well. Here in this post, I will explain everything to you. In DiRT 5, we embody - as always - a young rookie ready to make a name for himself in the ruthless world of off-road racing. But here, there is no question of being alone against all since a former champion will take us under his wing. In fact, the current star of the championship, Alex Janicek, sees in me a future champion, and to impose, this captain of the discipline is voiced by Troy Baker (Sam Drake in Uncharted, Pagan Minh in Far Cry 4, Joel in The Last of Us, or Higgs in Death Stranding). Of course, we will have to face a nemesis named Bruno Durand, a cold and calculating veteran to whom Nolan North (Nathan Drake in Uncharted, Modi in God of War, Desmond Miles in Assassin's Creed, or even the whole Mann family in Team Fortress. 2) lent his voice. Plus, In addition to the two sidekicks, the Codemasters also called on James Pumphrey and Nolan Skyes, the hosts of the YouTube channel Donut Media, who will be responsible for recounting our character's adventures via a fictional podcast. This three-star cast is completely new in the world of racing games where, generally, the storyline is relegated to the background. In fact, the developers promise five chapters, knowing that as usual, it will take good results to progress in the campaign. 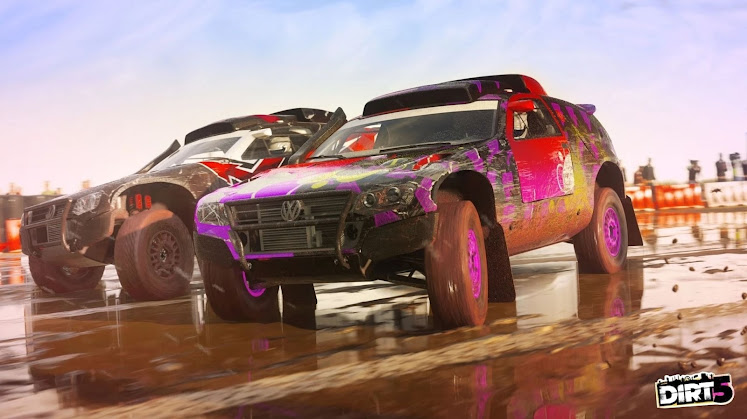 The management aspect will be paramount in DiRT 5 since we will have to solicit sponsors to finance us. More concretely, we will have to accumulate points of fame in order to access increasingly prestigious races, while our bank account will be used to afford more and more powerful cars. On this point, the game is rather well provided with many models divided into several categories. There are classics of the 70s, the best group B of the 80s (Peugeot 205 T16, Ford RS200), the glories of the WRC of the 90s (Subaru Impreza, Mitsubishi Lancer Evolution, Ford Escort Cosworth), but also monsters from Dakar (VW Race Touareg), buggies (Ariel Nomad), trophy trucks (Baja Racer), and finally Midgets (for racing on dirt ovals). The good surprise is that despite the open arcade approach to the game, each car has its own specific behavior, although the differences are bound to be blurred a little so as not to frighten newbies. Thus, a four-wheel-drive does not handle like a rear-wheel-drive buggy, while the weight of the vehicle plays a major role in its inertia. We were even surprised by the Midgets who start with a wheelie, thanks to their super-reduced wheelbase and their demonic power. Naturally, the developers have provided the usual package of piloting aids that can be activated or not depending on your level. Rather conventionally, we have traction control, ABS, and stability control, not to mention the manual or automatic gearbox. Very easy to handle, DiRT 5 immediately feels very good, even if seasoned sim racers who have sanded DiRT Rally are likely to be bored stiff in the face of so much permissiveness. 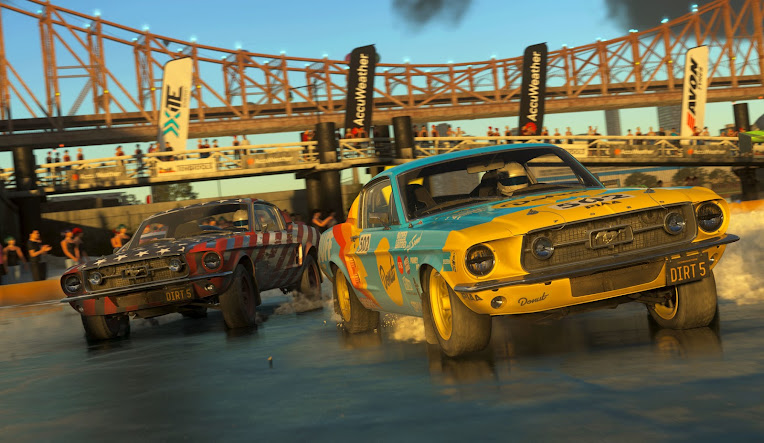 The goal here is not to get confused, which translates into a hyper-magnanimous damage system - the impact remains purely cosmetic. Likewise, if the A.I. doesn’t hesitate to play the bumper, don’t expect to see her perform real tactical racing moves. Either way, the game is still geared towards multiplayer, so we can replace the bots with real competitors to meet the challenge. Because of the next-gen technology, Codemasters is announcing the return of some features that have disappeared from the limbo of history, including the split-screen. Yes, it will be possible to play DiRT 5 with others on the same machine, without sacrificing too much visual performance. This is all the more important since this new installment in the DiRT series has particularly polished graphics. On our PC, in 4K and with all the options fully (the framerate was limited, however, no optimization was done yet), the rendering is really pleasant to watch. In addition, the title benefits from a fully dynamic day/night cycle and weather forecast, which means that you can start a race under a bright sun, before ending it in a blizzard on a moonless night. . This is what happened to me on the Norwegian circuit in the demo version. After leading the race for a little while, the pitch black night and heavy snowfall - which formed a white halo from our headlights - totally blocked my vision, which immediately caused my lap times to drop. Likewise, during Midget races, the cloud of dust raised by competitors is so thick and dense that it too can affect visibility, especially when in cockpit mode. 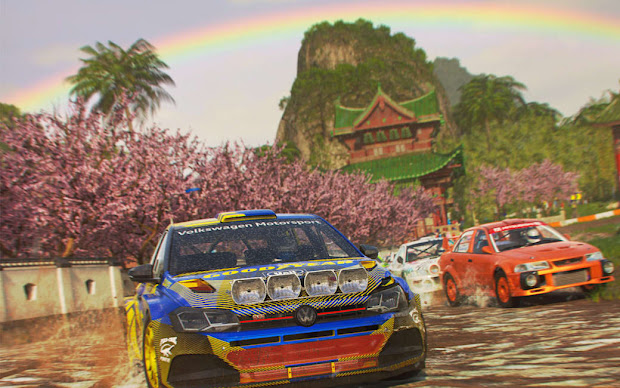 You will understand that the weather will have a big influence on the performance, even if I don't really feel a difference in terms of grip. It’s a shame, by the way, because I would have loved to be able to enjoy different behavior with the same vehicle, when torrential rain, for example, transforms a track on land into a giant quagmire. It's the same with snow; in the end, you only really feel a difference between the asphalt and the dirt. Of course, there are many types of events on the program, with races, time trials, and sprint races, each with its own difficulty. In our trial version, very few settings were available, whether it was graphics or gameplay. Impossible to touch the AI, for example. Likewise, no design option was available, although I know that there will be a way to make personalized liveries and affix the stickers of the sponsors. The only limit to the system: I will not be able to import external elements like in Forza Horizon (among others), because of the various deals signed between Codemasters and the companies that have agreed to lend their logo. Another problem with the game from Playground Games: the lack of a huge open-world could prove to be complicated to manage, as players are now used to being able to ride freely. 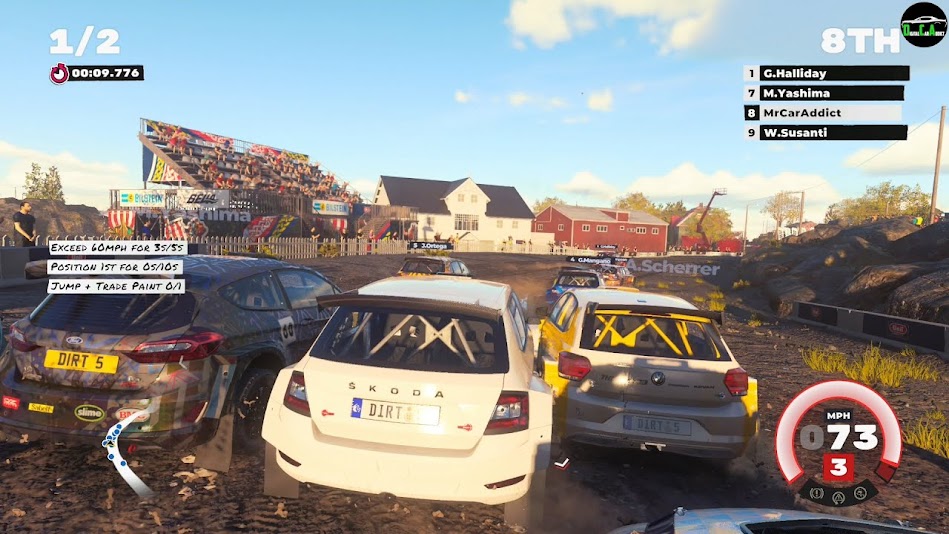 DiRT 5 is clearly shaping up to be one of the first real next-gen games, mainly thanks to its very nice graphics which take dynamic weather to another dimension. The power of the PS5 and the Xbox Series X also allows the return of a split-screen multiplayer, which promises great evenings on the couch with friends. Still, while the gameplay offers a perfectly balanced arcade approach, the game might lack a bit of spice to face the competition, led by Forza Horizon. In fact, I have lost the habit of going from one race to the other without being able to play the crazy on the road between the two, and it shows. That said, this lack of freedom could be compensated by the single-player campaign on which Codemasters relies heavily. It remains to be seen whether this will be enough to make people forget the deficiencies of DiRT 5 in other areas. If you would like to have more information, I invite you to visit the DiRT 5 official website for more details. Please leave your comments below if you ever tested the game, it would be appreciated.