Disc Room Review - Die And Retry At Its Peak 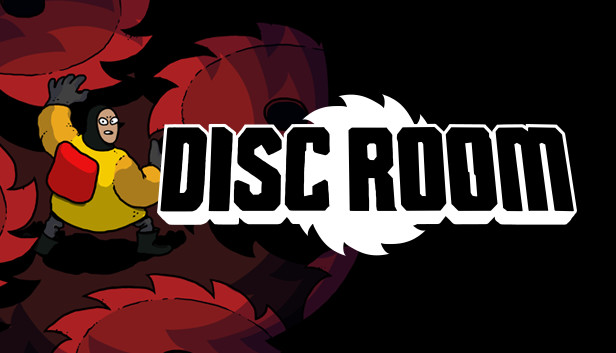 Announced earlier this year, Disc Room has just landed on PC and Nintendo Switch on October 22. Developed by a team of 4 people, Jan Willem Nijman and Kitty Calis (Minit), Terri Vellmann, and Doseone (HIGH HELL), this action game is published by Devolver Digital, which we know well to find titles very often wacky. Here you are in 2084, near Jupiter, and you will have to investigate the appearance of a giant disk. Like a modern Indiana Jones, you'll step inside to try and unlock the secrets of this huge record. Unfortunately, you'll quickly find that it doesn't mean good to you and you will most likely come out in several pieces. With a die and retry system quite present, you will be pushed to try your luck again and again to browse the many rooms that make up this giant disc. A real video game challenge, will Disc Room manage to bring a large fringe of players into its universe? Don't occasional players risk being quickly confused by this ambient difficulty? The answer, in this review! So here I tested the video game Disc Room on a PC with the following configuration: a GeForce RTX 2060 graphics card, 16GB of RAM, and an AMD Ryzen 5 3600X processor. I completed the normal mode in 3 hours and then the hard mode in 6 hours. The controller was privileged. 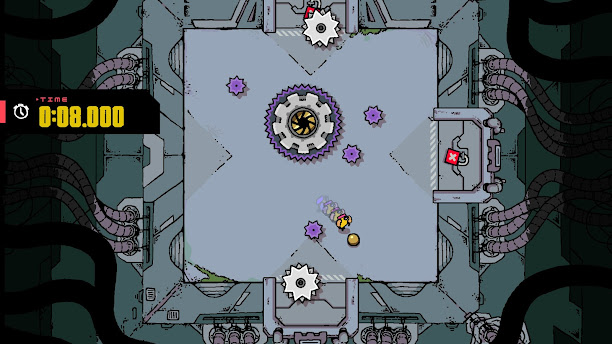 A completely crazy but effective concept

The head of Devolver Digital had said during the Disc Room announcement earlier this year: "I do not understand anything at all about this mess." And, in fact, during the first minutes of the game, you will be catapulted into this strange universe, with many rooms, with a whole bunch of objectives that will appear and that you will have to complete, without necessarily understanding much in the end. Fortunately, all of this will clear up soon enough, despite the mystery of your lingering goal. Composed of different zones, themselves made up of rooms, the giant disc which will have taken up residence in the vicinity of Jupiter will have to be explored from top to bottom in order to discover the reason for its presence here. And, you will understand it quite quickly, it will not be so simple! Each room will be an opportunity for you to die, cut into several pieces. In fact, as time passes in the room, discs will appear and you will have to try to avoid them in order to try to survive as long as possible: dodging will be the centerpiece of the gameplay and you will have to be attentive to each type of disc to anticipate its movements as well as possible and thus anticipate your own movements, all from above.

Different powers will be unlocked as the game progresses, making exploration as easy as possible: a dash that will allow you to become untouchable, a power that allows you to slow downtime, or an explosion power that will allow you to deviate the discs nearby. In short, a wide range of skills, giving you the opportunity to bring some variation in the gameplay, which is largely welcome given the simplicity of the overall gameplay. On the variation side, you will also have to rely on the different areas which will offer you a totally different universe each time, some of which will play on the light to drive you completely crazy. Did you think Disc Room was difficult in a bright room? Wait until you see the rooms lit only by a simple halo around you ... Each of the rooms will offer you an objective: survive a defined number of seconds, die by several types of discs, feed a particular monster, fight a defined number of Guardians. To discover all of the areas and thus complete the game, you will have to go through these different objectives, which can be quite complex at times. Difficulty and frustration will be there and you will be pushed to try your luck dozens and dozens of times for the same room with a single goal: to complete the area 100%. Having the opportunity to break the development team's time records will also add challenges to the adventure. 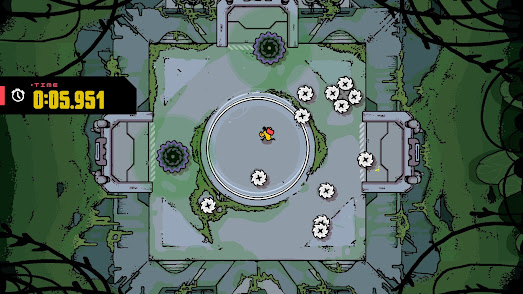 While it will only take you 3 to 4 hours to complete Disc Room for the first time, the adventure will not end there. In addition to offering you to complete the area to 100% by trying to survive at least 20 seconds in each of the rooms, a hard mode will be added and will allow you to redo the course ... in the opposite direction! In fact, without spoiling the history of the game which would hold in a few words, the normal mode allows you to enter the ship to try to find a mysterious character. The hard mode will allow you to exit the ship to return home. After beating the 4 Guardians, ending with the Supreme Guardian, you will unlock the new mode. If you thought Disc Room was difficult enough in Classic Mode, wait for Hard Mode! Fans of challenges will have enough to extend the life of a few hours, as this mode is so complex. In addition, being able to compete with friends who own the game as well as the developers give the end-game even more flavor. On the bestiary side, or rather on the “discotheque” side, you will be served! No less than 64 types of discs will be available, each with its own operation and pattern, which will add a little more difficulty and challenge to a game that already has a lot of them. You'll also be accompanied by a brand new character on this reverse journey (but don't worry, you won't lose if he gets chopped up before you). The action game Disc Room also offers you a simple but effective art direction: a very edgy soundtrack that may not calm your frustrations and sketchy but more than enough graphics. In the end, even if the gameplay is quite simple and relies mainly on dodge and anticipation mechanics, all the ingredients to make a good game are there. And, although casual gamers will lose their teeth in this action game, it is still accessible, if given a chance. 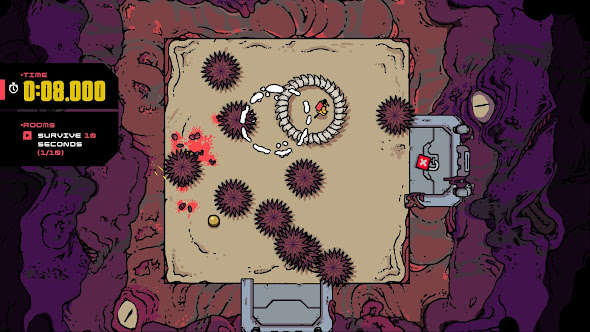 If you thought you had seen it all in the video game world, Disc Room will give you a great slap. With its effective gameplay, it will awaken the wholeness that lies dormant in you to push you further to your limits, even if it means trying the same room fifty times to try to complete an objective. The 4 developers behind the game have delivered a truly original experience that holds up. Honestly, I have often been surprised (good or bad sometimes) by the games published by Devolver Digital. Disc Room was no exception to the rule: I found myself playing the same room over and over again until I managed to complete all the objectives. This game would turn any casual gamer into a true try harder. The title is nervous, the mechanics are very often frustrating but we keep going back to get cut! A great discovery! So would you like to find more about this game? Why don't you visit the Disc Room official website for more details. I hope you enjoy this review, please feel free to to comment down below.