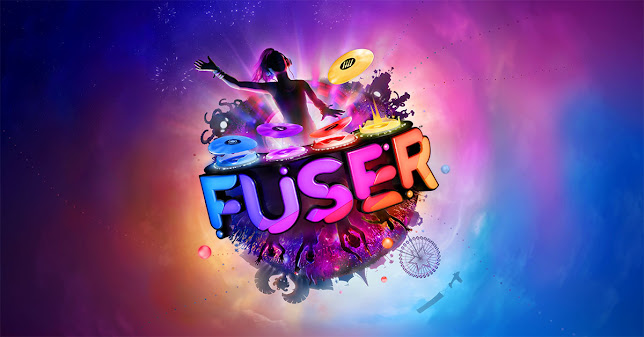 FUSER is the new musical game developed by Harmonix (Guitar Hero, Rock Band) that puts you in the shoes of a DJ. Unlike a DJ Hero, the title does not rely on a flashy accessory to stand out. Like some current musical games such as Cadence of Hyrule or Beat Saber, it is by its originality that it intends to seduce players. With a rather unique concept, can it nevertheless seduce the crowds? Well, the good news is: Ie was able to play for about ten hours on the Switch version, experimenting with campaign mode, online, and offline freestyle mode. However, I was unable to find any opponents for Battles mode given the few players online before its official release. 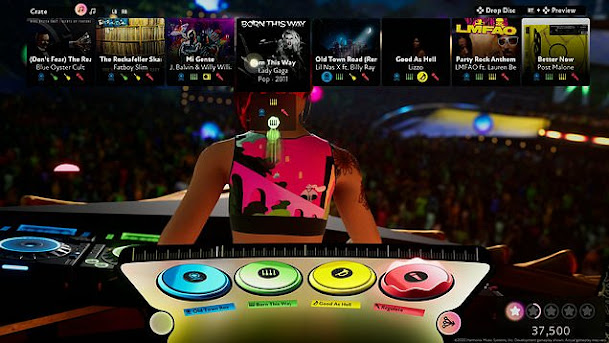 When you see a real DJ's mixer without knowing much about it, you almost have the impression of standing in front of the dashboard of an Airbus. The first good point of this FUSER is that it makes mixing accessible thanks to a very simple principle at first which is being developed over time. This results first of all in a campaign mode which allows you to learn the basics but above all all the subtleties. You thus step into the shoes of a novice who will follow the scenes with a mentor for each of them. These successively introduce you to one or two new game mechanics that serve to vary the approaches: taking into account the tempo, adding instruments, fades, transitions… This increase in power is exactly like what is FUSER, a game that allows you to create nice mixes quite easily, but which hides incredible depth because mastering all the cogs of the gameplay will not be an easy task. Yet it is this investment that allows you to stand out from the crowd and achieve much more polished sounds.

To quickly explain the principle without going into all the details, it is a question of picking among the 4 elements of songs (present at the top of the screen in a list that can be defined beforehand) to then mix them and them. transform on the mixer. It goes through vocals, percussion, basslines, melody, and more. The goal is to achieve maximum points by improvising non-stop with your imagination while responding to the demands of the audience (which may require a particular genre, instrument, or era) as well as campaign mode objectives. An obligatory passage for one to acquire this habit of permanent change while varying the manipulations. However, it's really hard to get a feel for a game like this without trying it out for yourself. It is also unfortunate that a public demo is not currently on the program because it is typically the type of game where you are initially skeptical by watching gameplay clips before seeing the ingenuity of the concept. and the pleasure granted once you have the controller in hand. 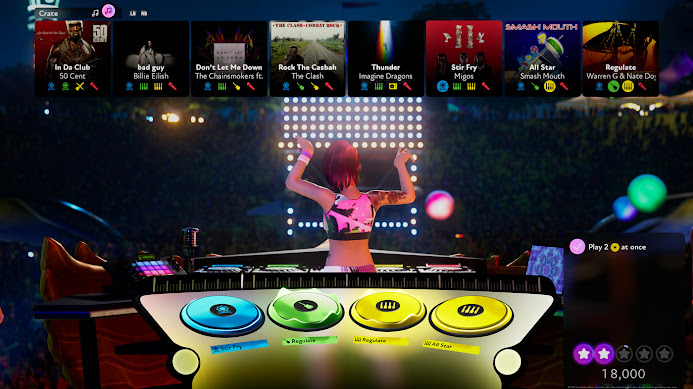 Harmonix and NC Soft have put the means concerning the FUSER playlist with hits ranging from the 70s to the present day without forgetting a large number of different genres: pop, rap/hip-hop, R&B, dance, rock, country, Latino and Caribbean music. With over 100 songs on the clock, it's pretty hard not to keep everyone happy. Lady Gaga, Rage Against The Machine, Imagine Dragons, Twenty One Pilots… it's impossible not to know most of the artists on this list. However, you will need to unlock them by spending a currency that you get each time you level up. The same goes for the customization elements of your avatar and your scene. Although the visual style will not appeal to everyone, FUSER has the merit of being consistent with the representation that we have of this universe with many rather wacky elements. It also represents this sense of spectacle by allowing us to further personalize our stage with fireworks, wallpapers, balloons, or even pyrotechnic effects that must also be acquired by spending a specific currency.

Perhaps its greatest strength is the creative aspect of FUSER. After having assimilated everything the campaign mode teaches us, we are free to develop our talents in freestyle mode. Here by objectives or public requests, you are free to mix freely. A great way to practice before you move on to online features and become a popular DJ. The title Harmonix not only ignites the decks but also hopes for a career online. With its "like" and "follow" system like a Twitch or Youtube channel, the software can thus further motivate people to invest in the hope of gaining notoriety. This also involves direct competition between players via Battles mode where two DJs compete in ranked matches to test their knowledge of songs and game mechanics or through a "more friendly" competition with an online freestyle mode where several players take turns mixing. Each week, an event is offered in order to win many rewards, including one exclusive if your production wins enough votes. It is still unfortunate that online mix sharing is only limited to a fairly short time. It's hard to really appreciate a two-minute concert. Having been able to test the title previously on PC via demos intended for the press, there were already no technical issues to report. However, the Switch seems to suffer from rare slowdowns which disrupts the precision of the timing (hopefully a day one patch will correct the problem). In portable mode, it is also difficult to visualize the graduation which allows you to keep an eye on the rhythm, but it is still a very good way to take advantage. Of course, the use of headphones is highly recommended.

FUSER turns out to be an excellent surprise in terms of musical playing by managing to make us appreciate the mix without necessarily being a great connoisseur yourself. It is not simplistic, however, and is full of various mechanics that allow great freedom in creation. Supported in addition by a monstrous playlist, this mixture of genres and eras further broadens the field of possibilities. The social dimension is also clever and in tune with the times in order to push for performance to stand out online. Quite surprised by this Fuser which makes a musical practice, at first glance quite close to the uninitiated, fun, and accessible. The playlist which mixes eras and musical genres also allows you to make interesting creations that open up a huge field of possibilities. Without being a great musician, I was surprised to see what you could do simply but also how much you had to master to achieve quite amazing things. And that can be seen online thanks to a fairly well-regarded community dimension. For more information regarding the game, please visit the FUSER official website for all details. Please feel free to send out your comments below, I will see you next time.