Hyrule Warriors: Age of Calamity - When the Heroes Rise

While many were waiting for Breath of the Wild 2, Nintendo had the brilliant idea of ​​re-partnering with Koei Tecmo and Omega Force to create this band new Zelda episode:  All of that with a mix of the beautiful and colorful universe of the series’s most acclaimed episodes with the musou style of the Warriors games, That was a hope for a very promising marriage between them. The third-party studio already had great success with the first Hyrule Warriors so Nintendo was open to loaning them the franchise again. Does Hyrule Warriors: Age of Calamity have the right recipe for making us wait until the sequel? Let's find more now!

To the rescue of Hyrule

Before the century of darkness leading up to the events of Breath of the Wild, there was one last great fight. This pitted the forces of Hyrule against that of the terrible Scourge Ganon, and the King of Hyrule hoped to save the kingdom from this threat. However, Zelda accompanied by Link and Impa traveled the counties to unite the forces of the four neighboring peoples and their champions to pilot the recently discovered divine creatures. Although we already have a good idea of ​​the conclusion of events, will everything go as planned? What new elements will we discover about this magical universe in Hyrule Warriors: Age of Calamity? Well, first of all like I said earlier, we find most of the primary characters from the main game. Between the four champions, Link, Zelda, his father, Impa, and the like, the cast is pretty much the same with a few being a bit younger of course. We are also entitled to superb cutscenes of the level of Breath of the Wild between each main mission. This then adds a seal of quality to a game that visually seems definitely drawn from the same universe. However, I'm not necessarily a big fan of the Dynasty Warriors-style games from which Hyrule Warriors: Age of Calamity is inspired. However, after making the first game on three different consoles, I was able to develop an appreciation for it. Let's say it also helps to have characters from a show that you love. And, even more, having a good story developed like it is here. I would say the rating went a lot deeper than with the first Hyrule Warriors. In short, Breath of the Wild fans should definitely discover this scenario. 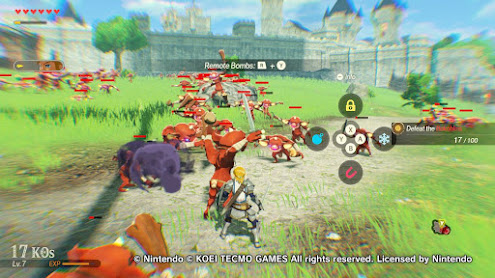 A musou for better and for worse

Then, I think talking about the gameplay is a must. What I love about the spin-off is that it was developed to be accessible and the combos are easy to perform. I think that this pretty much anyone who is familiar with action games will easily get away with it. The big news here is that Age of Calamity has added Link's primary powers to BotW. Simply by pressing R, you can choose one of the four runes which are ice, magnetism, time-stop, or bombs. So the game gives us a nice little visual over an enemy to indicate when to use which rune. You only need to be quick on the trigger to destabilize the enemy in the right way and gain the advantage of combat. Overall, the context of this great war is a nice pretext to justify the musou style that is used here. Our heroes are constantly confronting armies of monsters that represent the forces of the scourge. It gives the player a new perspective on the scale of this war and I find that it also allows us to not just focus on Link. I also want to highlight the variety offered by the different fighters. I liked Daruk for his power and Urbosa for his agility as well as his lightning attacks. The only small concern is that although the visual respects that of BotW, the fluidity of the image takes a hit. It is less felt in the cutscenes, but in-game when there are a lot of enemies, the drop can be drastic. Plus, I think the launch of the new consoles doesn't help the title either. When you've just played a few titles in 120 FPS, the difference becomes more and more noticeable and different to ignore. It's also a shame because the first Hyrule Warriors saw a big performance boost from the Wii U to the Switch, but that seems to have been lost with the graphics improvement here. 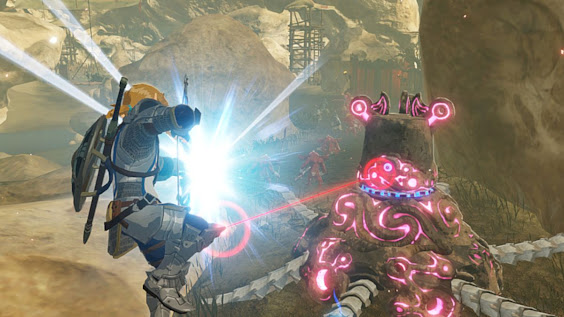 Next, let's get to the content because Age of Calamity has so much to offer. Hyrule Warriors, for its part, had its share of side quests and side missions to serve fans of the genre. This 2nd chapter has increased everything almost exponentially. The main missions may not have as many goals to do, but when you look at the map of the kingdom on the Sheikah tablet, the number of side things to do is staggering. So the more main missions you complete, the more side missions you add to the table and you quickly lose count. It is perhaps a shame that these are not particularly developed or varied, but at least they bring something to the players. It could be for example more hearts of life for your heroes or even new combos or cooking recipes. At the time of writing these lines, I have not completed them all, because I was frankly too anxious to see the rest of the story. On the other hand, it's a great way to stay ahead of the curve in terms of power and experience to get through major missions more easily. 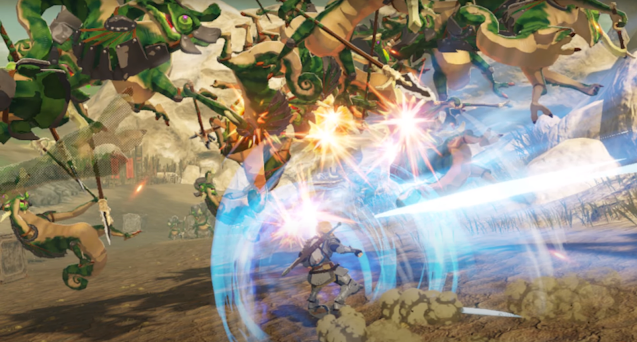 Now, let's continue with another element that makes Age of Calamity so charming. As with most of its titles, Nintendo plays with its power of nostalgia. This time around it's enough to go back a few years obviously which serves the game well. In my opinion, most of the players who have visited Breath of the Wild still have it relatively fresh in their memory. So I had some pretty vivid flashbacks visiting some places that basically kept the same setup. I am thinking, among others, of the kingdom of the Gerudo, whose castle we quickly recognize. There are some scenes that instantly took me 3 years back and it reminded me of some key moments. You don't need to have a deep recap of the main story when you have designs that respect the original work as well. 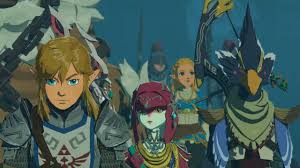 To conclude, Hyrule Warriors: Age of Calamity is both a good accessible and fun musou whose story will capture the attention of fans of the series and particularly of the last game. In addition, it offers ample content to fans of the kind that will take dozens of hours. Finally, despite the somewhat irritating picture slowdowns in this type of game, there was nothing that would hold me back from finding out about the events of this pre-episode. Hyrule Warriors: Age of Calamity is an excellent and very accessible musou that respects the universe of Breath of the Wild without making mistakes. Despite some slowdowns, fans of the series will want to cross the tables quickly to find out what this story has in store for us through fabulous cutscenes. And, for those who want to savor the experience, there is a ton of secondary content available to make the fun last.

So if you would like to learn more, I invite you to check out the Hyrule Warriors: Age of Calamity official website, this is where you will be able to find everything you should know about that video game. If you already played the game, you can comment below as well. It is always appreciated.