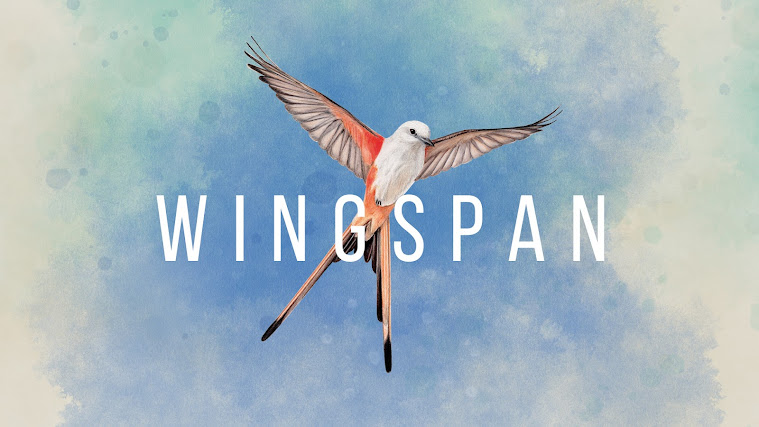 Wingspan is the latest from publisher Stonemaier Games. This publisher, through its games like Viticulture, Scythe, or Charterstone to name a few, is becoming one of the most innovative, dynamic, and interesting publishers to follow in the small world of playful creation. Just through one of its creators, Jamey Stegmaier, who offers real conferences or master classes from his living room on social networks, and likes to share his vision, his ideas, and his thoughts on the world of gaming. So I can only suggest you go and have a look by yourself, it is extremely informative! Then because Stonemaier Games offers real little jewels in boxes. They don't just take out the games, they give it real care and the content as much as the container is neat. Themes are not just there to ride this or that mode - you just have to look at Scythe and its extremely immersive and deep theme. Wingspan is a perfect illustration of this with its theme which, at first glance, would only raise the bird club in the area. Risk-taking, innovation, top quality material ... Stonemaier Games knows how to do it and I dare say that they place themselves on the player's side when they design their games, and for that alone, it's worth the detour!

Here we are, we threw them flowers, we will now refocus on the subject: the test of one of the games that have + buzzed on the internet in recent months: WINGSPAN !!!!! As avid bird enthusiasts (if it's written in the game), you seek to discover and attract the finest specimens to your aviary. There are no less than 170 bird cards in this game (!!!), a dice feeder (great idea!), Very cute eggs, 1 bird tray to place the cards available for purchase, etc ... In short, sacred stuff once again, which best serves the original theme. This fun little bombshell is the work of Elizabeth Hargrave, the illustrations are by Natalia Rojas, Ana Maria Martinza Jaramillo, and Beth Sobel. Stonemaier Games the publisher, and Matagot the publisher for French localization. Suitable for 1 to 5 players, ages 10 and up, and lasts about 1 hour. 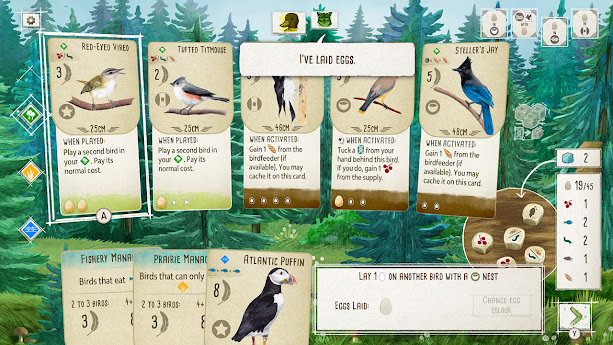 How do we play?

Wingspan is a point engine creation game. This means that the cards you put down will have effects that will garner points overturns. For example, when you trigger an action on a habitat where there are 3 cards already placed, the actions of these 3 cards can be triggered and a starting action potentially triggers several other actions, and also victory points. In this game, you have at your disposal a personal board representing your aviary, which is divided into several habitats (Forest, Meadow, or Marsh), each of which can contain 5 bird cards. Each of these habitats focuses on a key aspect of growing your aviary:

At the start of the game each player receives 2 bonus cards and keeps 1 for the game. 1 objective board common to all players is set up and will set the objectives to be reached in each round, and the number of VPs that will bring each player. There are 8 objective tiles available (double-sided), which allows you to change the game for the next games. Each player also receives 8 action cubes. By placing a cube on one of the areas of the individual board, the player triggers the corresponding action. 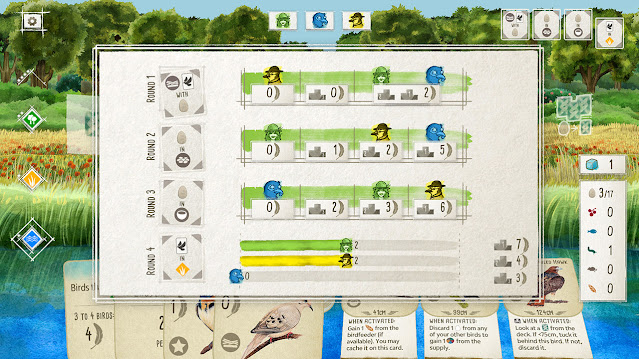 There are 4 of them:

Play a bird with his hand. Pay the cost indicated on the bird's card, and place it in its habitat (Forest, Meadow, or Marsh), as far as possible to the left. Some birds have a pose power that is triggered, others an activation power that we will detail below. Gain food, the player will place one of their action cubes in the row corresponding to the Forest habitat, as far left as possible. Depending on where he places it, he can collect 1 or more food dice from the feeder, and place them near his tray. He then collects the food tokens corresponding to the faces of the dice taken. By placing birds in habitat, we, also, increase the amount of food we collect. 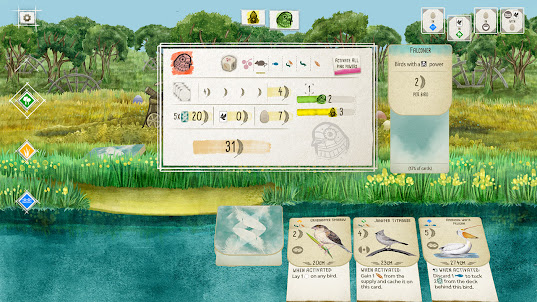 The powers on bird cards are of 3 types:

Bird powers are always optional. When all players have placed their action cubes (1 cube per turn), the round ends. Each player scores the points for the current objective if they have met the conditions, and we move on to the next round, with 1 less action cube. At the end of the 4th round, the start ends and we count the points of birds, bonus cards, objectives, eggs on the board, stored food, and covered cards. 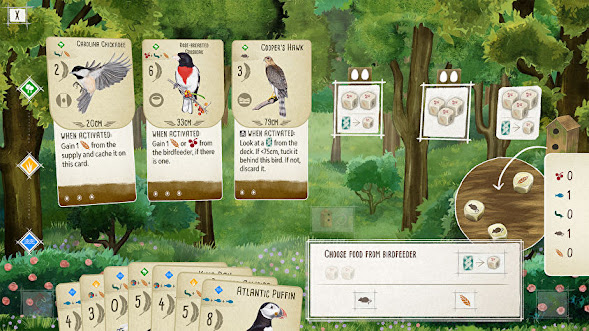 Wingspan deserves its place in your toy library for many reasons: the theme is original and immersive. If I had been told that I would like to play a game that offers me to collect various birds, manage their food, and lay eggs ... yes.   As surprising as it may seem, the alchemy is present and we get caught up in the game. The illustrations are superb and the maps very detailed (there is information on the bird, its size, and its geographical region of origin)  The game and its mechanics are not difficult to understand and are affordable even for non-regulars. Of course, it will take a little practice to master it and beat all its opponents, but it can allow you to introduce people to the games, and even satisfy regulars who will seek to fight to the maximum, and to "break" the game to get the biggest score! the quality of the material is there and offers a game designed for players, and this is rare enough to be highlighted. The editorial work of Stonemaier Games is once again a guarantee of quality and seriousness, we can only encourage you to discover their other titles. a well thought out single-player mode, as in all Stonemaier Games games, with their Automa system which makes the happiness of those wanting to have a small single-player game against a virtual opponent worthy of the name! So that's a big YES for this original, well-constructed, immersive, and endearing game. This time we are not waging a war, we are building our aviary (that rhymes). We quickly get into the game, we try to fight, anticipate our food needs, and maximize the impact of our actions. We think about several turns in advance, we trigger our actions at the right time (or supposedly the right time), and we keep in mind the common objectives and the bonus cards. All this to score a maximum and beat your opponents, even in the competition of the most beautiful aviary! For more information about the game, please visit the Wingspan official website for all details.