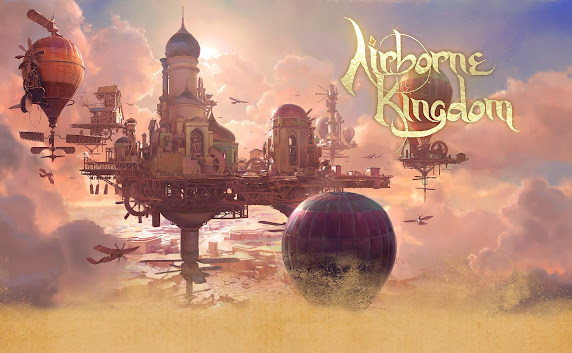 The first title of The Wandering Band LLC studio, Airborne Kingdom had something to charm with its exotic allure and its particular artistic direction. Mixture of city-builder and exploration game, this indie title lets you roam the desert in complete freedom aboard a flying fortress of your own making.
Now is the time to see if this surprise at the end of 2020 is a good one or if, conversely, the experience is not as pleasant as we would have liked. So what I did, I played Airborne Kingdom on PC witch is also available on the Epic Games store using a publisher version.
The review was completed in about ten hours of play which allowed me to finish the campaign while taking my time. Airborne Kingdom was tested on a PC with 16 GB of RAM, an RX Vega 56 and an AMD Ryzen 5 2600 running at 3.40 GHz with the graphics settings adjusted to maximum. 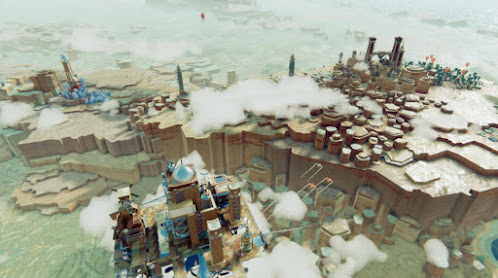 A dreamlike journey full of charm

Necessary to turn around the port and let's talk about what is obvious: the artistic direction is obviously up to date and offers an exotic experience that stimulates the player's exploratory soul. The world in the form of a checkerboard that reveals mountainous landforms and edges that look like an unrolled map, the interfaces with clean and coherent designs, the day and night cycle, all this communicates in a pleasant way.
It also becomes difficult to tire of this alluring visual envelope even after several hours. The music that accompanies the player throughout the campaign is more or less discreet but generally remains fairly good quality. I can however note an occasionally too discreet sound design.
In fact, during the game sequences, certain moments occur, when the music is a little more absent, when the sound design is too low and where I can feel a somewhat confusing silence. However, this shortcoming does not greatly affect the adventure. The charm of the game is still felt at every moment. It is difficult not to draw up a positive assessment on this point.
Finally, in the absent subscribers, or at least not present, I can also list the story and the narration of the title. This aspect of the game is really set back to the point that it's even easy to be tempted to skip the rare dialogue with the earthly kingdoms that still make up almost all of the title's narrative. The observation is a bit of a shame on this side since it would have benefited the game by adding a little more depth to it. In short, I was more interested in the adventure than in the issues that led to it. 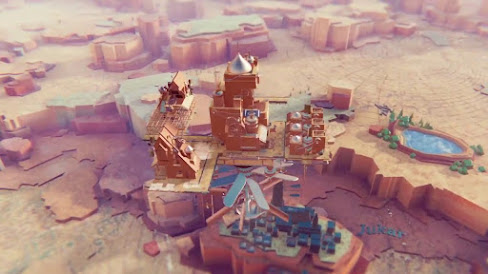 Between contemplative adventure and city-builder

You will understand, Airborne Kingdom offers the player the opportunity to cross desert lands aboard a flying fortress that he must build and develop as the adventure progresses. More than a simple city-builder, the title aims to offer a strong contemplative experience and also does not hesitate to compromise and simplify the mechanics of management games in order to make it's content easily accessible to a large audience.
The creative aspect is always there and it is very fun to build your own flying fortress. However, the creation tools are not legion either, and if I except the few buildings that are unlocked during the campaign, the game does not renew itself much during the adventure. In short, The Wandering Band LLC's work focuses more on an accessible, sensory, and contemplative experience than on rich and varied gameplay.
Unfortunately, the lack of varied content is still felt. One of the most fragile examples concerns the various quests offered during negotiations with the game's 12 different Earth Kingdoms. These are sorely lacking in diversity. In addition, the activities offered to players are not very numerous either, and if I couple that with the creation tools which are also not very diversified, I quickly understand that this represents one of the big black spots of the game.
However, although the tools are not numerous, they are still well put together. In fact, the title makes the most of its flying fortress mechanics by incorporating some specific mechanics such as, for example, having to be careful not to unbalance the structure by building too much on one side. One thing can also state the attention that the player must pay to the risers and thrusters of the Kingdom so that the latter can maintain a high altitude while advancing at a reasonable pace.
I would have liked to see these unique mechanics taken one step further to support the game’s unique identity. Of course, these are not the only issues to be faced during the campaign. Most of the player's constraints are linked to the different needs of the inhabitants of the kingdom. Thus, as the campaign progresses, they will require, for example, roads that are lit and many other things.
Accordingly, in the event that the player is no longer able to meet these demands, some residents will decide to separate themselves by leaving the player's building. The difficulties encountered during the adventure are however slim. In fact, even if there are tools specific to management games such as research and acquisition of plans for new buildings, there is no real danger present in the game and game over is virtually impossible. 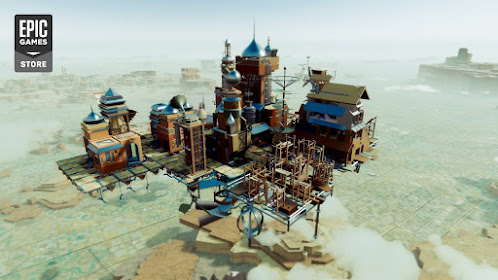 A personal experience of great freedom

Finally, let's talk about an essential point that makes the Airborne Kingdom experience really pleasant: the freedom offered to the player in this title, I am invited to explore an open world and this, in a non-interventionist way. You can choose to negotiate with the different kingdoms in any order you want, to develop your flying city as you see fit. You can then travel the world as quickly as possible in order to finish the story rather quickly, or you can wander and take your time doing various research to increase the capacities of your kingdom.
In view of the life of the title, the second choice remains however preferable. In addition, navigation on the map could certainly have been improved in order to facilitate the orientation of the player and to display some additional options such as the presence of a zoom for example. In addition, even if the game offers a great deal of freedom, I would have liked the management of the workforce within the floating citadel to be less restrictive.
Now, apart from the deployment of inhabitants in the resource zones located below, you will not have a say in the assignment of tasks of your residents. If, for example, you build a factory to make charcoal from wood, a few people will automatically be assigned to the factory and you will not be able to place them elsewhere. These will only stop working if the factory is disassembled since otherwise, they will remain there even if your wood resource is empty and your factory is of no immediate use.
I am then obliged to pay attention to the number of inactive citizens before creating certain types of buildings. This could have been a good point since it encourages the player to build new buildings sparingly, but I would have liked to have this information when launching building construction in order to know how many people are mobilized and how many. Finally, Airborne Kingdom had the good idea to equip itself with a rather worked photo mode which presents a lot of options. Everyone can also share their creation by dressing it with a nice panorama. This then brings a little community side to the very nice game! Airborne Kingdom is still a breath of fresh air for those who want to embark on a contemplative experience, admittedly short and repetitive, but oh so free and relaxing. I certainly regret a lack of depth and diversity in several aspects of the title, but the title of The Wandering Band LLC still manages to take on the role of a nice independent game without the fuss that lets us take our foot and our time.
For more information about the game, make sure you visit the Airborne Kingdom official website for all details. Also, why don't you post a comment and tell us what you think about the game? Enjoy!