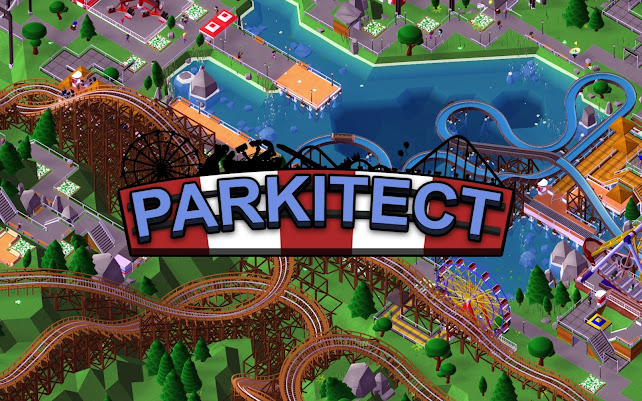 After Theme Park, the famous Rollercoaster Tycoon series has become known as an essential reference in amusement park management games. More recent episodes shunned by the community marked the arrival of a certain Planet Coaster, with more advanced mechanics. For its part, Parkitect however wants to be a simpler alternative and closer to the spirit of the first two references cited, but what is it exactly? Initialized by the small studio of Texel Raptor thanks to crowdfunding in 2014, then arrived on Steam in 2016 via early access to exemplary monitoring, Parkitect came out of this phase in 2018. Unlike a more realistic Planet Coaster, the game opted for a simpler graphic style (and less greedy), as well as the creative tools and the general atmosphere which wants to be more relaxed, keeping, all the same, a significant batch of possibilities. The interface, to begin with, is meant to be accessible: regulars in games of the genre will be on familiar ground, and newcomers should find their bearings fairly quickly. Parkitect offers a campaign, but also a scenario editor, and a sandbox (with the choice of options such as money, research and development enabled, etc.). The scenarios offered are rather nice and simple, each having its own particularities and related themes. Primary and secondary objectives are needed to unlock future parks, however, they are relatively classic, and will generally aim to achieve a certain number of entries before date X, a minimum level of visitor satisfaction, etc. 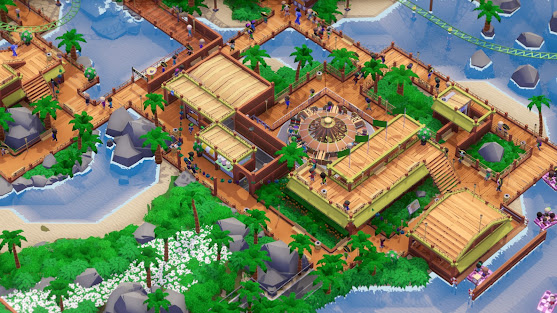 BETWEEN CLASSICISM AND MODERNISM

However, these things will eventually take a back seat for the main objective: to develop your parks, according to more or fewer constraints, but in your image. The park development tools will be quickly spotted by aficionados of this type of game: activation of loans (among several available), advertisements for attractions or the park, employee management, complete interfaces on income, expenses or stocks of merchandise, thoughts of visitors, funds allocated to R&D ... all is well there. But above all, you will find the creation of your stalls, attractions, and decorations, the latter having a lot of weight in the feelings of your visitors. Regarding your stores, these will offer a small possibility of customization concerning for example the measurement of sugar or salt as ingredients, having an impact on the future consumption of your visitors. However, they will have to have the supplies delivered. Also, it will not just be a matter of placing them anywhere, but it's also about placing a delivery center; this can use a network generally placed underground, allowing deliveries to cross from the entrance to the park to a delivery depot, then be routed by a new park agent: the delivery man. The same goes for the management of garbage in your park, which will go through a network of garbage chutes. To stay in the management of employees, they will need restrooms, and to be more efficient, they can visit a training room that you have previously built. However, be aware that visitors do not like to see the delivery men or these various management buildings: it will also be a question of blending them into the background! 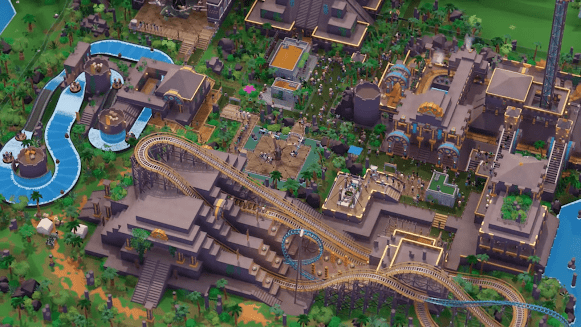 THE LOCATION OF THE DECOR

At this level precisely, the game wants to be closer to Planet Coaster, quite free, and above all much less rigid than the Tycoon series. This is because some decor elements can be made larger or smaller, most colors changeable, and often they can be placed in a stacked manner, overlap/cross, etc. They can be placed on benchmarks (boxes for example) or more randomly. This makes it possible to create combinations of decorations and to make the whole more natural, denser, and less frustrating than certain management series. Some elements, however, should be positioned more or less far from buildings or attractions, such as trees for example, where ferns and other bushes can be placed absolutely anywhere. 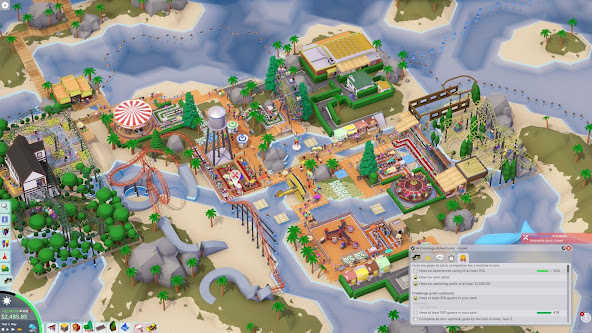 We come to the main topic: the attractions. These are quite numerous and benefit in addition to the additions of the community on the Steam Workshop, the game being quite open on this subject. However, it's just too bad that the game doesn't have a lot of choice in the visual styles of the basic trains for the roller coaster. For the rest, we are also in familiar territory, the interfaces strongly resemble the other series; we can criticize the lack of risk-taking, but this has the merit of making the game ultimately more accessible. The name, the colors, the price, the statistics… everything is there! The creation of roller coasters offers a simple interface, where we are at the crossroads between the two series previously mentioned, as much in the complexity of the approach as in the possibilities. Personally, I think this is a good compromise, as the possibilities of Planet Coaster have put off more than one player who does not want too much trouble. We can display statistics concerning the forces exerted, decorative notes, or others by our construction, which will color the areas of tracks according to the parameters and characteristics are chosen. This filter can also be activated during construction, since a vehicle travels the track to the last rail currently laid, allowing you to see if it reaches that far, indicating the current time and length and avoiding you having to restart each time times a test manually. The attractions will have a decorative note, making it possible to increase the infatuation parameter, and also more easily attracting visitors in addition to allowing you to inflate the price of access.

The money can eventually return fairly quickly to your cash if you manage the management well, so it will be wise to indulge in the artistic practice of decoration, Parkitect still offering a happy medium between creativity and management. Do not neglect, for example, covered areas on your paths and queues, a visualization filter of more or less covered areas being possible, and it will allow your visitors to shelter from bad weather. 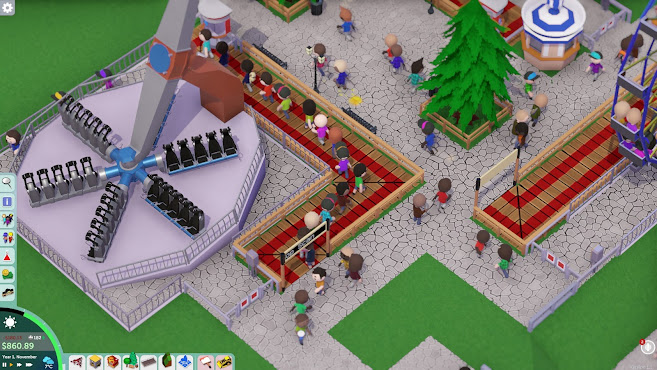 "THIS IS NOT MY CAM"

As for the negative points, we can however note certain elements such as the camera and the controls, which are not always intuitive. The camera is blocked from the base on a certain angle of the axis of the height for performance reasons (the displacement is however made possible by a mod). I can also deplore the absence of the basic Coaster Cam, the famous on-board camera, this one being accessible there also only via a mod on the Workshop. If the content is quite substantial, it still lacks some pre-created elements on common themes: Greek / Roman, Egyptian, snow/ice, etc ... here too, the Workshop and the community filling some of the gaps. Note that a contest for the community is held every month on creations of attractions concerning a theme, the best integrating the pre-created attractions and their decorations directly in the game. Many creations are really admirable, they will avoid those and those who do not have too much artistic soul to still have beautiful things in their park. 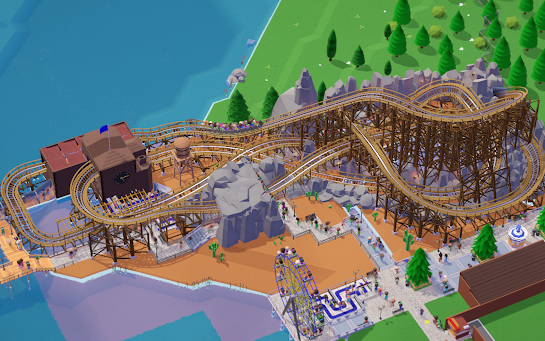 Small studio, but a big game! Parkitect is more free and flexible to use than the RollerCoaster Tycoon series, with a feeling of simplicity of creation and a greater part of management (in terms of interest) than a Planet Coaster. By trying to draw the best of its references and by bringing its own little personal touch, the title of Texel Raptor manages to satisfy the amateurs of amusement parks who want to have fun without taking too much head, while remaining permissive. The community and its involvement, as well as the still-active monitoring of the studio, shows that the game has potential in the long term. So, in other words, why don't you visit the Parkitect official website to learn more about that game, and if you ever played before, I would like to hear about your impression in the comments below. Thank you for reading my Parkitect Review.