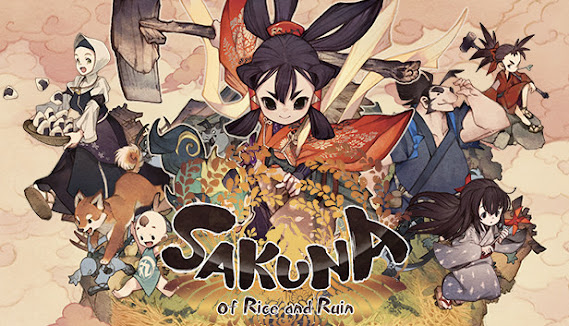 While, like every year, 2020 promises to end on a high note with a bunch of big video game releases, some less publicized titles still risk trying their luck in this congested niche. This is the case with Sakuna: Of Rice and Ruin, a somewhat peculiar Japanese title since it offers a rather unusual mix of genres. Although the niche is rather poorly chosen, stuck between blockbusters like Watch Dogs Legion and probably eclipsed by the release of the new generation of consoles, Sakuna: Of Rice and Ruin does not dismantle and wants to be generous. After giving you my first impressions in a preview, let's now see what the finished product is worth it. I played for about 20 hours on a classic PlayStation 4. During our review, I did not encounter any major bugs or concerns.

I already told you about it in my preview, the first impressions on the title of Edelweiss are quite mixed, although I came out with a certain enthusiasm. First of all because the graphics processing is quite disappointing, showing a certain delay compared to the competition. Sakuna: Of Rice and Ruin alternates between 3D phases where you can roam freely, and others in 2.5D corresponding to the fighting.

However, it might have been better to settle for simple 2D pencils, which could have given the title a more identifiable personality, and might have prevented the few slowdowns I encountered during my review. An Odin Sphere appearance, in short, would have been more than welcome. However, the visual result is far from bordering on disaster, thanks to a relatively convincing artistic direction. Although again lacking a bit of character.

What doesn't change, however, and I touched on this fear in my preview, is the storytelling aspect of the app. Let's face it, I wasn't expecting him on his narration. It is moreover rather true that many titles of its kind, Japanese moreover, shine more by their universe than by their framework. The trouble is, it's never been truer than here, so much so that you quickly come to dread the many dialogues.

It all started off pretty well though, with a minimalist yet friendly staging, as well as stereotypical characters promising some fun scenes. Unfortunately, the narrative ultimately sins by its exclusively handwritten aspect, by the absence of reversals of situations, and more generally by a cruel lack of interest in its progress. Let me be clear, I will soon start skipping discussions, especially as they regularly come back to haunt the adventure.

On the other hand, it might not be worse this way, since as is often the case with Japanese games of its caliber, this one hasn't been translated from English. However, the language level oscillates between basic and technical, the fault of a certain number of terms not particularly common. Rest assured, however, you don't have to fully understand what all the complex words, often representing materials, are to appreciate the title. 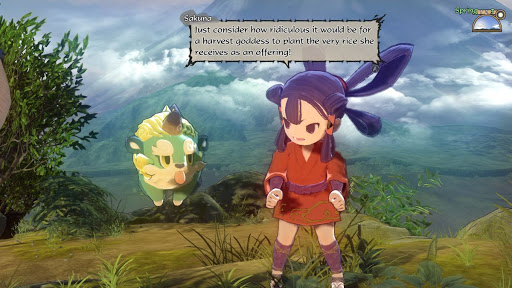 I emerged from my overview with as much enthusiasm as questions. And the first: is the combat system evolving enough not to end up being redundant? Unfortunately, the answer is no! This is perhaps the biggest flaw in the game, which nevertheless shines with the dynamism of its clashes. The trouble is that it is different for their originality, but especially for the repetitiveness of the sequences and the attacks.

I learn new abilities in a trickle, and I can only attribute a certain number at the same time to my heroine. So the catch is that you quickly get around it, and take a long time to acquire new attacks. So you quickly have the impression of going in circles, which is a shame since otherwise, the clashes are rather enjoyable, although somewhat messy in the execution.

The other big part of this Sakuna: Of Rice and Ruin, then, is the cultivation of rice, as the name suggests. From the outset, let's say that the idea was pretty good to mix genres and that the balance between action and farming is fine. However, tending to my field quickly becomes boring, annoying, not to say undrinkable in the long run. This he owes to excessively repetitive mechanics, even not very intuitive.

Fortunately, it is possible to assign certain tasks to one of my companions, but the result will never be as good as taking care of your crops yourself. However, all progress in the adventure depends on the quality of the harvest, since it is the latter that will grant experience and new skills to Sakuna. So, to get the best result, you will often have to sacrifice yourself, which means spending a lot of time indulging in soporific QTE for example.

The second big flaw of the game, also, tries by this characteristic to make us win hard the evolution of our character. Not a bad idea on paper, far from it, but the execution remains to be seen. I might have preferred that the farming part take up a little less space, or be a bit less decisive in the statistics of my protagonist. Especially since one ultimately has the unpleasant feeling of going into battle for little! 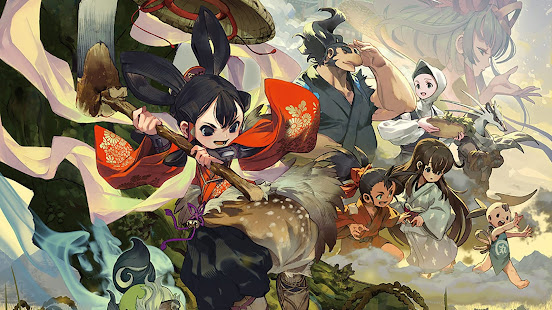 I come to the last fault of the game, and not the least: its structure is rather poorly thought out. If the balance between farming and combat is rather honest, that is unfortunately not everything. Firstly, because these two aspects, the main components of the adventure, can be improved. But above all, the progression, and more specifically the way it is organized, needs to be reviewed.

The adventure begins with a dialogue highlighting the main characters, with first and foremost the goddess Sakuna, who is embodied throughout the game. Following some nonsense on her part and that of five humans she comes from just met, this small team is exiled on a lost island. With the only real mission of returning to basics, of plunging your hands into the earth to return to civilization grown up.

From this point, the adventure progresses in a linear fashion. Every day the sun rises and with it my little troop. In spring you have to plant rice, in summer take care of it, and in the autumn harvest and do some tedious tasks. In winter, the land is abandoned. Each season consists of only three days, which actually go by pretty quickly. However, we must also find the time to explore the island to find food.

The problem is that the story moves very slowly, but more importantly, the events seem to come about in a purely random fashion. Sometimes I get up in the morning and something has happened ... Or I go an entire season without hearing from my companions. This, coupled with this scenario which is sorely lacking in salt, ultimately gives very little desire to advance in the game. I end up giving importance only to the growth of our rice and to the fights, by pestering when problem happens to our companions.

There remains the meal system, which is not uninteresting. While fighting, I collect various items and food, which depend on the area explored and the sliced ​​creatures. It is then possible to choose what my meals will be made of. However, certain dishes give me different bonuses. Thus, by choosing wisely what Sakuna eats each evening, I can achieve more or less easy progress the next day. Also, let's not take away from Sakuna: Of Rice and Ruin its decent lifespan and likable soundtrack, although the latter does go around in circles at the end.

Finally, let's talk about the challenge, since it is purely and simply non-existent. I am regularly confronted with bosses, rarely imposing, which are most often easy to put down. In the few cases where it would be difficult to deal with it, however, it is sufficient to end the year, harvest the rice, and come back once done. Your level greatly improves Sakuna's strength and endurance. This means that a new year allows you to overcome past difficulties without any problem ... In short, the challenge is also never lasting. 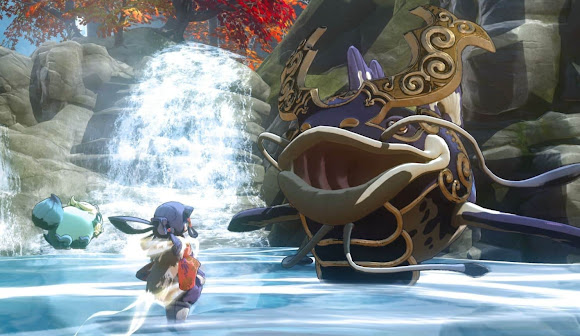 Sakuna: Of Rice and Ruin Review the conclusion

There are very good ideas behind this Sakuna: Of Rice and Ruin, which above all benefits from dynamic and enjoyable fights, as well as a friendly atmosphere. However, many details can still be improved, especially with regard to the depth of gameplay, progression, or simply the repetitiveness of actions. That’s a shame because as it stands, I feel that I have not gone far from a really good game. But otherwise, I will have to be content with a pleasant experience, with rather obvious limitations. I wasn't expecting much from the title and I'm still a bit disappointed. The combat system had thrilled me during my preview, and I found this mix of genres quite nifty. Unfortunately, I was very quickly bored to death on this adventure of which I still do not understand the progress, or at least its interest. Also, I find the characters loathsome, which, in general, is completely unacceptable. In short, I would not come back to Sakuna.

For more information about the game, make sure you visit the Sakuna: Of Rice and Ruin official website for more details.