Twin Mirror Review: An Agreed Escape In The Psychological Thriller 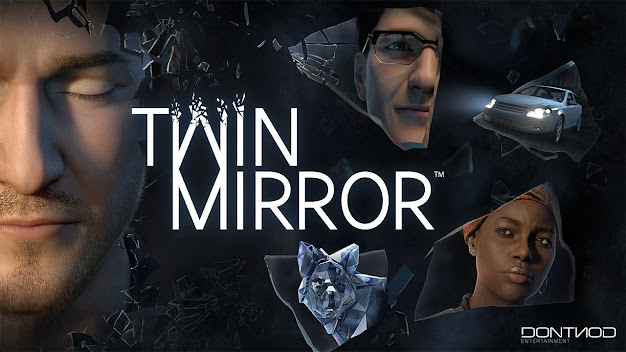 After having capitalized on a certain sense of the direction and the realization of the narrative game following the success of Life is Strange, DONTNOD, if he has proved that he knows how to produce different types of games, returns again to the formula which made its success with Twin Mirror, which this time poured into the psychological thriller. Twin Mirror is, according to the accepted expression, an interactive drama which, once is not customary at DONTNOD, is not offered in an episodic format, but rather as a whole. In a single game, you will also have a beginning, a middle, and an end, which today remains more enjoyable than the fashion (which is running out of steam) for games designed as seasons of television series. Note, however, that the game is not of infinite length and that it will take you around 4-5 hours, a little more taking your time, to see the end credits. 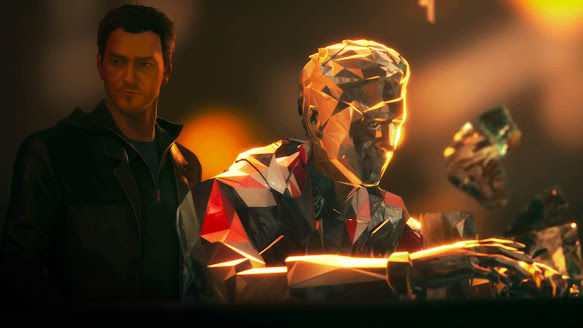 In Twin Mirror, you play as Sam Higgs, a former journalist for the town of Brasswood, whose articles have highlighted mine safety defections and the town's main employer. These revelations led to the closure of the structure and also to a wave of dismissals for which most of the locals hold you responsible. This toxic atmosphere, combined with a love affair that ends badly, forced Sam to leave town without saying a word or almost for more than two years. But the death of his best friend brought him back to his hometown, with the aim of attending his funeral. Your presence at the funeral vigil is also an opportunity to bring back some memories and also to set the scene by introducing you to most of the characters that you will come across throughout the adventure. Your friend's daughter, his ex-wife, your ex-girlfriend, your employer, or the local police chief will all have a few words to share with you in order to pose a little quickly and awkwardly the few years that have come to pass. 'flow in the life of the city. And this is also an opportunity to start investigating the circumstances of your friend's death, which you think are suspicious for reasons that we will be careful not to reveal here. Unfortunately, things do not go as well as expected, and resentment of part of the population towards you is felt rather quickly. After drinking too many glasses to remember the facts of the night before, you wake up the next day with the hangover of the century in your hotel room but quickly have a chance to sober up when you realize that the only clue to the nature of the night before is your own bloodstained shirt. The discovery of a body later, and plenty of evidence leading the police to believe that you are the ideal culprit, and Twin Mirror is launched, between investigating the truth of your friend's death and having your name cleared.

Overall, you will be on familiar ground here. Twin Mirror adopts a very slow pace, focused on dialogue, and a very compartmentalized progression. Understand that it is, for example, only once spoken with all the expected protagonists that certain places will become accessible, even if your own deduction could make you want to speed things up. This is not a flaw in itself, the dialogues are rather successful, as well as the dubbing (English, French subtitles), and the investigation, although a little sewn up, is pleasantly followed. Not everything is perfectly down to earth in the game, however, and Twin Mirror's slightly more fantastical getaway is in two ways. 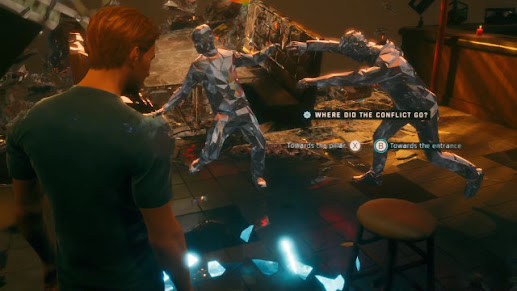 A GAMEPLAY REDUCED TO ITS MOST SIMPLE EXPRESSION

The first thing is your mental palace, when you are in the presence of clues and you have to try to reconstruct the chronology of certain events, you are parachuted into an abstract world which diffuses possible projections of things past or to come. For example, to help you remember your drunken night at the local bar, you'll need to collect clues around the places and then build a consistent timeline to rekindle your memory. No need to worry about making a mistake, however. If all the assumptions can be simulated, the game will systematically let you know if you are on the wrong track or not. Although quite pleasant to lead, these sequences are sometimes a little crude, like this time when to access a caravan, you decide to start a fire in the middle of the forest rather than try another means of diversion, probably more coherent. and less drastic, but also less interactive. This is also where we feel that, to a certain extent, DONTNOD has sought at all costs to shape some puzzles to make the game more interactive, more fun than a simple corridor of dialogue, at the cost of a certain break with the credibility of the events of the game. In addition, another pillar of Twin Mirror is the presence of your character's alter ego, a sort of intrusive consciousness with which you will more often than your turn has the opportunity to exchange. Often good advice, this personified consciousness is sometimes a source of dilemmas and from time to time offers you one attitude to adopt rather than another. If we do not reveal anything, since ultimately these moments are quite a few, know that it is essentially there that the choices with the most marked long-term consequences will reside, to note that at the end of the course, a choice modifying the approach to the last portion of the game is to be remembered. For the rest, there are a few handfuls of dialogue that will be felt at the turn of a sentence, and, for more visibility, most of your choices are recorded in your journal to observe the statistics of your decisions and put them in opposition to them. to those of other players.
In addition to a few more abstract sequences that illustrate Sam's great moments of anxiety, Twin Mirror will also take place for a few hours, between phases of dialogue, investigations, mental palace, and interior conversations. There is ultimately not much to reproach the game, which also knows how to be sometimes really very pretty and inspired in its environments and atmospheres. We could blame him for the loading times a little abrupt and a little too numerous which spoils the fluidity of the narration. But it's essentially his story itself that lacks a bit of boldness and bite. Sometimes a little capillotracted and even precipitated in its last third, the thriller of DONTNOD lacks a little thickness to leave an unforgettable memory. Finally, interactivity is still reduced to a minimum and some sequences more oriented "gameplay" sometimes seem a little forced and can harm the cohesion and fluidity of the whole game. Not enough, however, to unsettle the most fervent lovers of narrative games. 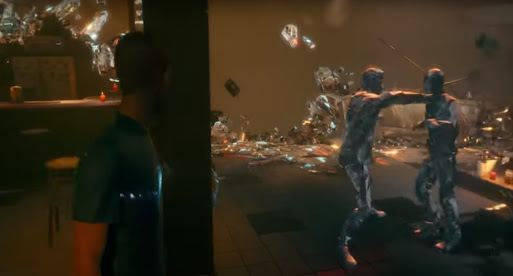 Often very pretty in its surroundings, and endowed with a gallery of characters, some of which are very endearing, Twin Mirror does not however reinvent the formula of DONTNOD, nor that of the interactive drama. The story of the game sometimes pulls strings a little too big, shows some clumsiness, especially in its use of certain twists, and ultimately wants to be too little interactive, even for a narrative game. Without being unpleasant to follow, the escapade in the psychological thriller of Twin Mirror does not manage to embark the player enough in its stakes to be completely unforgettable, even if the amateurs of the genre should still find what they are looking for. So, in case you would like to learn more about that game, just visit the Twin Mirror official website for all details. Also, if you have any comments about the game, just head down below and write your own. It is always appreciated.