Dead By Daylight Review: An Intense And Bloody Manhunt After a somewhat mixed Warhammer 40,000: Eternal Crusade, the Behavior Interactive studio returns to us in great shape with an atypical game mixing slasher and infiltration and responding to the sweet name of Dead by Daylight. Released on Steam on June 14, 2016, the title quickly became popular, especially thanks to streamers who immediately felt its entertaining potential. A bit like a Friday the 13th, the game invites us to play as a survivor or a killer, on a morbid ride under the gaze of a mysterious entity. But even if the title reminds us of the horror movies we sneaked on our parents' VCR, it's with the controller in hand and headphones on that the experience is meant to be complete. But is she really? This is what we will find out together.

In its concept, Dead by Daylight offers us an asymmetrical gameplay in 4v1 as we had already proposed Evolve in 2015. However here, the survivors will have to survive a gigantic manhunt orchestrated by an entity of which we ultimately do not know much. The killer, meanwhile, will have to use his hunting instincts and speed to track down and sacrifice the unfortunate ones who cross his path. The title looks like a real Slasher cat and mouse game, all on a large randomly generated map. Where Dead by Daylight stands out is in its gameplay. How many times have you ever said while playing a stealth game, "Ah, if only the AI ​​was smarter"? Well, it's done: with the killer being controlled by a player, the infiltration only becomes more exciting and stressful. 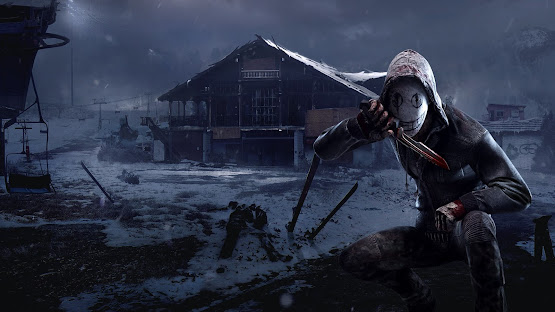 When you play as a Survivor, you must repair and activate five generators - scattered throughout the map - to open two large metal doors that will allow you to escape this nightmare. Simple isn't it? This is what you will say to yourself once the first part starts ... just before you are chased and butchered by the killer who will not stop seeing you hanging from a hook, a smile on your lips, while you frantically press on the space key pushing back the monstrous appendages of the entity seeking to pierce you. And if it ever takes the killer to stay camped in front of your hook, your allies will have a hard time coming to free you. Especially since mutual assistance between teammates is not mandatory and betrayals can occur.

Instead of coming in for help, a survivor may well decide to fix a generator or just escape as you crawl across the ground with your arm outstretched, calling for help in a voice choked with your own blood. Because yes, if you die the game continues, however, you have no way of getting back in, it's over for you. You can decide to stay and watch your allies until the end, but that is of little use, since even if the other survivors manage to escape, it earns you absolutely nothing. Another interesting little addition: when the survivor performs an action, he must perform skill tests at irregular intervals where it will be necessary to press a key at the right time under penalty of seeing, for example, the generator exploding in a noise that will alert the killer. A good way to keep the pressure up throughout the game. You will understand, Dead by Daylight is ruthless, at least for the survivors, because when you play the killer, it's another story. 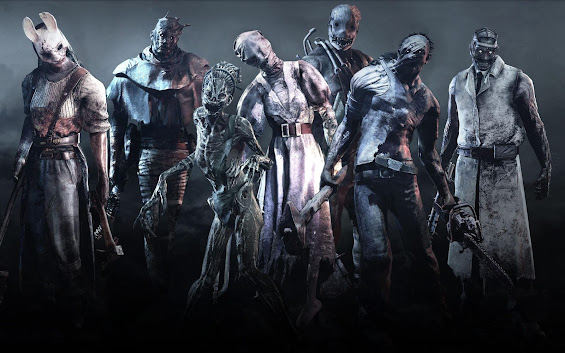 Have you ever dreamed of playing as a horror movie monster? Michael Myers, Freddy Krueger or quite simply the hunter, the one who relentlessly hunts down his victims ... well, here you can satisfy your fantasies of a bloodthirsty psychopath by playing one of the 11 killers available, some of them from famous licenses. Your goal is simple: chase down your prey, wound them enough until they can no longer stand, and then impale them on a hook so that they are sacrificed to the entity. Be careful, however, because some killers and survivors are only accessible in DLC. Knowing that each of them offers a single killer and a single survivor for a few dollars, you can easily exceed the price of an AAA if you want to unlock all the content. However, it is not necessary to own the DLC to play against the killer and on the associated map. A good point all the same which has the merit of not dividing the community.

There is something pleasurable about playing the killer; we feel powerful, we are the wolf in the fold. But sometimes the Survivors are more skilled at cat-and-mouse than you are, and the game may end without you getting to hit or even see a single Survivor. The killer has a view in the first person, which considerably reduces his field of vision unlike the survivors who themselves evolve in the third person. The killer also possesses an aura of terror that alerts survivors to his nearby presence. It materializes in the form of music - stressful - and a heartbeat that gets louder the closer it gets. Because of this, it is quite easy - at least at a low level - to feign the killer. In fact, much of the game revolves around the "mind game" of feint, distraction and anticipation. The survivor has several elements of the scenery to interact with such as dropping pallets to slow the killer or hiding in a cabinet. It is not necessary for the killer to have caught all the survivors to win, the game considers a victory acquired when at least 2 survivors have died. However, the game ends when all the miraculous have fled or / and been sacrificed. 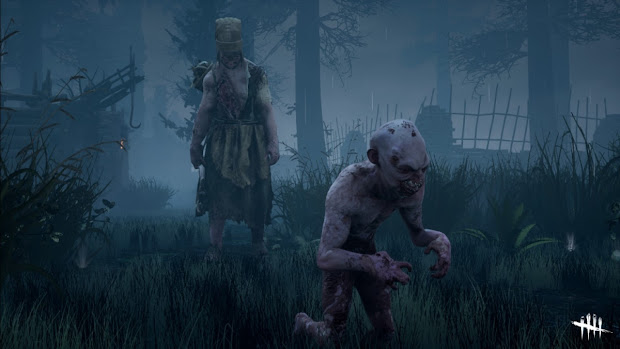 SURFING ON THE CANVAS

But losing or winning doesn't matter, because it all revolves around the blood point system that you gain by performing actions. For example, repairing a generator, taking an ally off a hook, or injuring a survivor for the killer will earn us a certain number of points. You can very well die in a game, and still earn more points than someone who escaped, but didn't do much. It’s this point system that makes the game so addicting. These points can be spent on what is called the "web", a kind of small randomly generated talent tree. You will need to complete each "node" of the tree in order to advance to the next level (for the current survivor or killer) and unlock a new web (also generated randomly). And so on. The more your character evolves, the more complex the canvas will be and the more points you will have to spend to level up.

Each node in the web unlocks consumables that you can use during a game, such as a toolbox to repair generators faster or a flashlight to blind the killer. There are also offerings, which are temporary buffs that you can burn at the start of a game. Each new web can have a skill that you will unlock mainly at the end of the tree, and which will improve your character. There are a number of skills, some of which relate to a type of survivor. For example, the skill "Frantic Race", which increases your movement speed for a short period of time, can only be obtained by Meg Thomas. However, once you reach level 35 with Meg, you can share this skill with another survivor. Another solution, you can also unlock them by using "the temple" which allows you to buy every week skills of other survivors with iridescent shards, currencies that you earn very slowly at each end of the game. A good way to vary your character at a high level. The same pattern applies to killers as well with specific skills for each. This progression system adds a random side and pushes the player to constantly want to progress in order to see what the next web has in store. 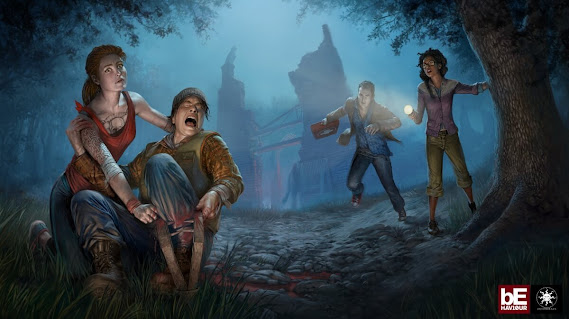 Dead By Daylight Review, the conclusion

A true reference to the horror films of the 80s, Dead by Daylight offers high-quality asymmetrical gameplay complemented by an addictive progression system. Offering a unique experience, the game is a gigantic cat and mouse game. The grip is a real pleasure and the skill-testing system maintains constant pressure. The title remains a pleasant experience as both a killer and a survivor, although you will have to have a strong heart to play the latter (vocally with friends, screams are guaranteed). However, interface issues and the peer-to-peer hosting system darken the picture and make the whole feel unfinished.

For more information regarding the game, please visit the Dead By Daylight official website for more details. Also feel free to leave your comment below and share with us about your own gameplay experience.

February 08, 2021
Role-playing games are an inexhaustible source of inspiration for studios and publishers who rarely miss the opportunity to adapt these acquired franchises to the cause of video game fans. The Baldur’s Gate and Shadowrun saga or Cyberpunk 2077 to name a few, the examples are legion. Now it's the turn of Cyanide in collaboration with Nacon to lend themselves to the exercise and to get their claws out. Werewolf: The Apocalypse - Earthblood is the Action-RPG adaptation of the eponymous role-playing game. The wolf, after a long hibernation, is about to emerge from its den. THE PACT OF THE WOLVES Werewolf: The Apocalypse - Earthblood takes for framework a contemporary universe close to ours in many ways, and yet so different. On this alternate Earth, the balance of power is in jeopardy. The Wyrm, the evil incarnation leading the world to destruction and chaos, is gaining ground. Faced with rampant industrialization, a direct consequence of human activity, the Dark World is on the
Post a Comment
Read more

October 27, 2020
After having abandoned the idea of ​​a free-to-play, the studio Ecthra Games is trying to make Torchlight III the worthy successor of two very good hack'n'slash from the years 2000 and 2010. Available in early access recently, does the title manage to rekindle the flame? Nothing is less sure...  Torchlight III is currently available in early access and should also evolve in the coming months. We will follow updates to the title and modify the rating accordingly. Torchlight III is a complex project: after the success of the first two episodes, his studio Runic was unfortunately forced to close, but a new structure was then born, called Echtra Games . This young studio made up of former Runic players, then set about transforming the license into free-to-play. The Torchlight Frontiers project did not last long, however, following very poor feedback from the press and players. Now Torchlight III , this new hack 'n' slash has been available for early access on Steam fo
Post a Comment
Read more

Partisans 1941 Review - Not Yet The Commandos We Expected!!!

October 28, 2020
While the Germans of Mimimi Games have put the tactical infiltration game back on the front of the stage, here is a Russian studio embarks on a form of opposition with Partisans 1941 . On the menu, a game that is very reminiscent of the venerable Commandos in which Russian resistance fighters resist the German army on the eastern front. Like a symbol. To the east, there is also a History In June 1941, Nazi Germany launched a lightning strike against Russian troops. They are forced to withdraw to the border, leaving behind many prisoners and a people distraught at the advancing German army. This is where we meet Commander Zorin who, after escaping the awaiting summary execution and finding some companions, decides to stay behind enemy lines to organize resistance there. But of course, when your troops consist of two men and a kid, you have to play smart and avoid fighting as much as possible. Or at least try. Unknown soldiers We can say that Partisans 1941 is casting a wide net when it
Post a Comment
Read more