Halfway between a Roguelite and a Dungeon-RPG, Gods Will Fall is an independent game that relies on the challenge and a fairly personal conception of progression to arouse the curiosity of players. I had the opportunity to try it in preview (and exclusively), here are my impressions about the game. I had the opportunity to play a beta on Steam with one of my friends. Given the difficulty of the title, I was able to complete several more runs afterward. Half of the content was also missing. 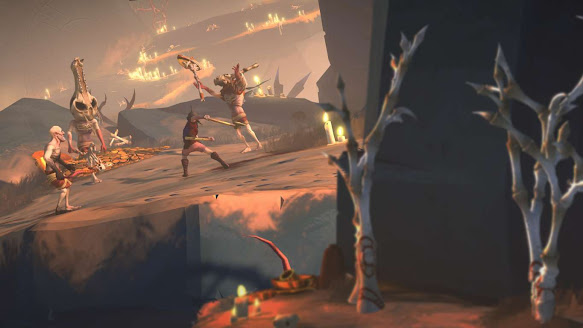 Inspired by films like Band of Brothers or games like Cannon Fodder on Amiga, Gods Will Fall features a group of Celtic warriors who are humanity's last hope. In order to put an end to the tyranny of the gods who demand uncompromising submission, they will have to defeat the ten divine tyrants by traversing equally numerous dungeons. We start our adventure after a shipwreck on an island that we can explore at our leisure and without risk.

It is a huge, cleverly disguised hub where you control an entire group at once. The title is intended primarily for players who like a challenge and who like to constantly adapt, a position fully assumed by the developers. Each game will not be the same for everyone because we have direct access to the ten dungeons from the start. Each of them can only be walked by one warrior, the others must wait for the doors to open again knowing that it is highly likely that no one will come out.

In the latter case, you have two choices: either you send another warrior to save your companion or you change location, praying that it is less difficult than the previous one. Nothing tells you which dungeon you are going to fall into or its difficulty level. This is undoubtedly one of the strengths that I quickly notice, what I mean is this pleasure of discovery and continuous learning as well. 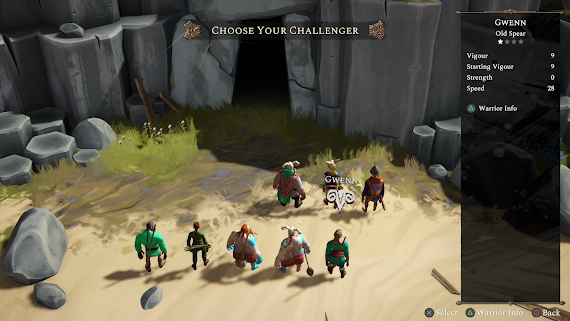 With inevitable redundancy, the Clever Beans studio has taken care to make each dungeon unique and full of secrets to uncover, but also deadly traps. This is also felt in the artistic direction which offers us superb sets (and beautiful panoramas of the world plagued by the damage caused by these gods) and varied while emphasizing the horrific aspect. Only five out of ten were available on this version, but we already have a nice preview with, for example, a huge forge, a bone forest with sinew bridges, or a huge stone temple.

Gods Will Fall will probably have to be turned up and down to finally see the end of it. Because even by braving all the trials of the dungeons, the hardest part is still to defeat the gods acting as bosses. Note that rushing directly towards them may not necessarily be a viable solution because some may be weakened beforehand by killing minions in particular. It will thus be necessary to deal with the unforeseen and to abandon a companion the time to gain in equipment and in passive capacities to return and save it. If the indie game is so far intriguing enough and of good quality, we will have more reservations about the gameplay. 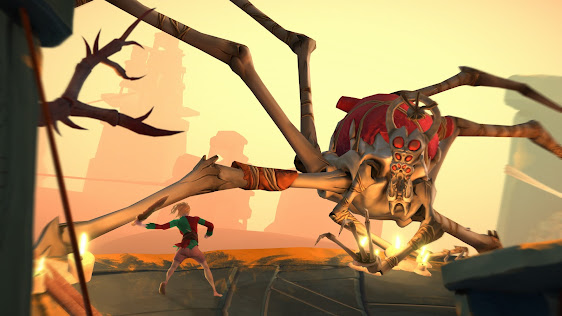 Adaptation and discovery also go through the eight heroes who make up our group. We often see interactions between them as special events as well. Some have for example a painful passive with a god which will give a stat penalty in the dungeon or on the contrary it can boost them. Even taking into account a disadvantage, it doesn't say that using the best for us is the best tactic according to the developer. When one of the fighters gets stuck, it can also cause low morale for those members they are very attached to.

As with the rest, this part is taken into account in the plans and routes that we build to complete all the dungeons. It also goes through the styles of each hero who wield different weapons, some are more practical than others depending on the monsters present. Although all the gears of the game give pride of place to the unique, the gameplay unfortunately does not follow this path and is repeated quite quickly in addition to being sometimes imprecise on the controller (which is preferred by the studio).

The concern is that the weapons are not varied enough (we stay on the classic with swords, hammers, spears, double ax…) and that the actions are more or less the same for the eight heroes. Whether it's the grab or the ground attacks, or the rage gauge that restores a little health and an attack bonus for a short time, it lacks a style of its own. In terms of group management, the title is somewhat reminiscent of Children of Morta, but unfortunately, it lacks the diversity of the Bergson family in gameplay. Still, this notion of sacrifice remains a good idea. 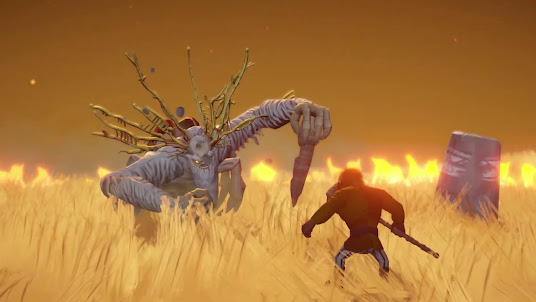 Gods Will Fall Review, the conclusion

Gods Will Fall will undoubtedly arouse the curiosity of players who love a big challenge, as that of Gods Will Fall is particular because it is not based on immediate difficulty but on length. Managing your group of heroes and the (random) order in which you do the dungeons are good ideas even if the gameplay remains too classic and does not allow for real differences between the characters.

For more information regarding this video game, please make sure you visit the Gods Will Fall official website for more details.