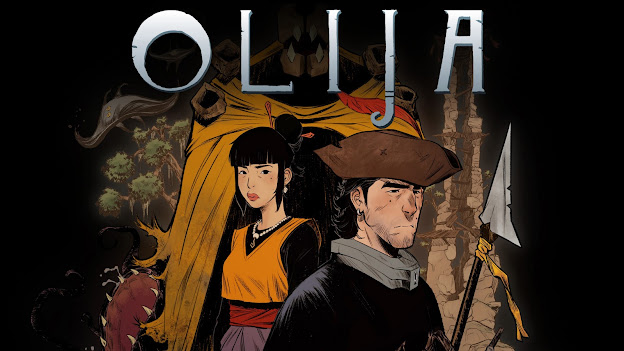 It's been a few years since we know: the independent projects supported by Devolver are to watch like milk on fire. The fact that a certain Olija, in preparation for several years at Skeleton Crew, landed in the hands of the irreverent editor last summer necessarily makes you want to be interested. It's done. No regrets, because this is a game that does not take us too far. This is a story about a storm, and, about a shipwreck. But it is also the story of a scattered crew and about an abandoned captain who will try everything to get back home, with his crew. But for that, he will have to fight. Faraday, it is the name of this penniless fisherman who thought to find wealth in the Japanese seas, is found after being caught by the depths prisoner of a hostile country, Egremonde. The surf, or rather fate, led him to a curious compass that allowed him to get his hands on a singular harpoon. This weapon is his salvation. On the one hand, because the natives like the local fauna have a slight tendency to quarrel with him, and his fists are not enough. Then, because the instrument, enchanted, confers incredible powers. 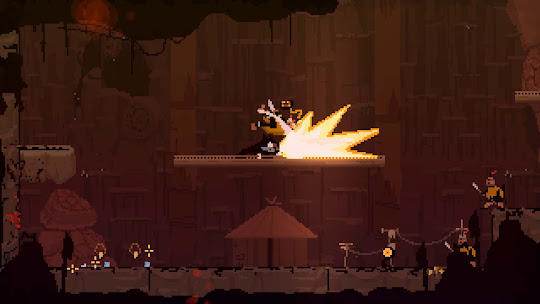 No cage for Faraday

A classic 2D platform and action game, Olija places at the heart of his experience this harpoon not only useful for smashing offenders with energy but also for teleporting. It is enough to throw it on a point of attachment of the decoration, a wooden crate, or an enemy to appear immediately nearby. And because the handling is demonstrably precise, and you benefit from sufficient floating time between each transit, it is possible to chain together very quickly and without a hitch. In no time at all, the clashes turn into an extremely dynamic (and gory) ballet, the platform phases, sometimes thrilling chases, into Spider-Man-worthy aerial walks. As long as you don't mess with timing and direction, of course. And don't think that your gray matter is left out: some levels incorporate other mechanisms, such as levers sensitive to your legendary weapon or to the electricity it has stored. It's up to you whether to call her back instead of teleporting. Always smart, well-integrated, and not repeated enough to cry out for indigestion. 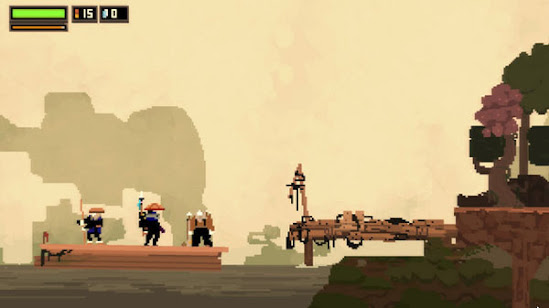 In any case, it is impossible to speak of redundancy. Olija does not give the time. Even though we would have the feeling of always crossing the same critters or scoundrels of the seabed, the levels, to be chosen on a map according to your needs to advance in your quest, follow one another at breakneck speed. That's it when you're having fun. The bosses, entertaining but few in number, seem like snacks to a slightly experienced player. Finding collectibles and crew members isn't complicated. In short, the challenge is not very important and the brevity of Olija, less than 5 hours to see the end, is frustrating. There were sure to be things to garnish.

The main hub, of which we appreciate the peaceful atmosphere before returning to battle, offers services that we end up losing interest very quickly, the fault of an unbalanced economic system. The local currency is obtained too quickly. Is it used to increase your life bar? This will be at the max in a snap. You can send an old sea bass to search for items to make you hats, granting attack abilities during an entire stage? Then again, in a blink of an eye and you've got all the headgear. And we are not talking about the dodge jump or secondary weapons, providing great firepower or new mechanics, which we would almost forget the existence. Frustrating, I tell you. 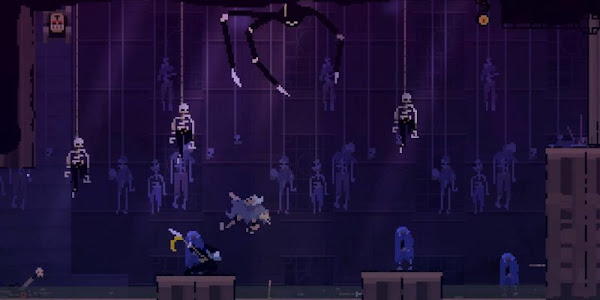 A story without a future?

We will insist all the more on this frustration as, beyond even her never boring playful proposition, Olija has an incredible charm. And the words are weighed. His Pixel Art, at first glance crude and naive, in fact, conceals real artistic treasures and details in its environments which are not immediately obvious. But, in addition to strongly reminiscent of Another World, they finish giving it a cachet of an adventure story, between Zorro and Pirates of the Caribbean, colorful, with majestic buildings, gloomy caves, and monuments in the rock that make you want to escape. It is mastered, with real care for the backgrounds and foregrounds willingly reinforcing the mystery of Mangemonde. And expressive.

Thomas Olsson's game does not only talk about its sets. He also has characters to develop. Including that of a hero worthy of a swashbuckling film, handsome, tall, strong, who will meet the eyes of a crowned head. Very pretty, not to spoil anything. The encounters between the protagonist and the young woman giving her name to the game open up sequences of a crazy romanticism, which work wonderfully. Without words, leaving to the soundtrack, navigating between flamenco tunes and typically Japanese tones in a well-studied way, the time to place a languid sax. There is in the atmosphere, the staging, and the gameplay of Olija, which intermingle with passion, all of a great story. Its fleetingness and intensity make it a very beautiful love of vacation. 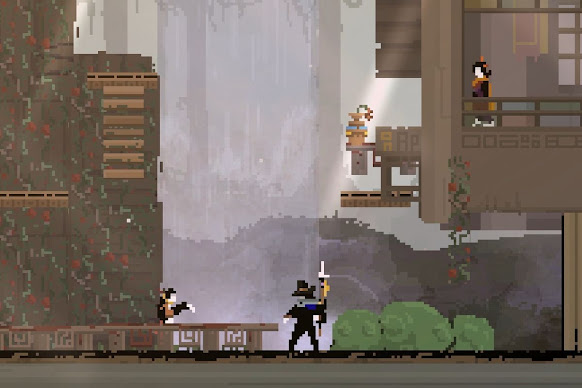 True adventure film in Pixel Art, Olija has, by its aesthetic qualities, its clever, dynamic gameplay, and its very successful narration, all of an exceptional catch for the player in search of a change of scenery. If its qualities provoke love at first sight, it must also be recognized that its weak resistance and its ephemeral nature give vagueness to the soul.

For more details regarding this game, please make sure you visit the Olija game's official website for all details. You can also leave your comments about this game in the field below.