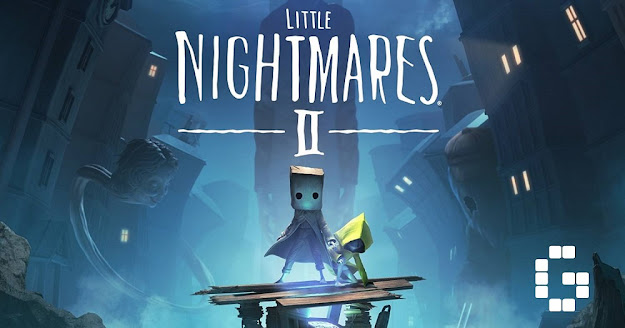 In line with the cinematic platformers of Playdead, Little Nightmares, the first of the name, has managed to find its audience. With a singular universe, this experience, not free from faults, was a classic adventure in its structure, but very effective. What about this second installment you may ask me? Did it learn from the past to make his grievances disappear and outdo his elder brother? Let's find more. 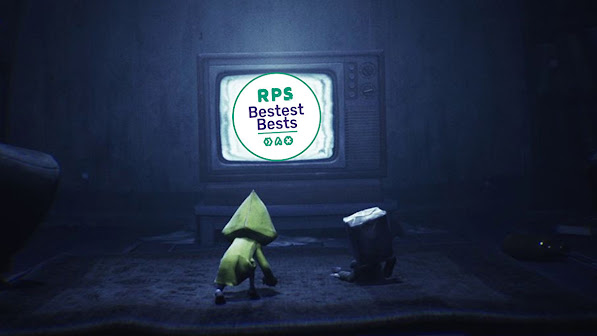 A LOT OF NOISE FOR NOTHING?

From the first moment, the legacy of the studio behind Limbo and Inside is more obvious than ever. The adventure opens with a gloomy forest from which our new hero, dressed in a paper bag to hide his face, must extract himself. Trunk rolling down a slope threatening to flatten us, wolf traps, crows, a chase sequence where the hero will have to hide in gray areas ... A known imagery and situations already encountered by anyone who has touched the titles of Playdead. From a strictly narrative point of view, I was disappointed by Little Nightmares 2. Where the first episode managed to restore a tortured world, where disturbing figures gathered around the practice of cannibalism, the second chained sequences of nightmares sometimes free. The progression of the previous title met the need for real script development. As the player advances, he obtains elements of answers allowing him to piece together a dismal story. Here the structure which will be repeated 4 times during the adventure is as follows: Discovery of a place, infiltration, and puzzles, pursuit phase, end of the zone. Each section takes place in a disturbing environment and is inhabited by a separate monster. The woods are haunted by a masked hunter, an orphanage by an authoritarian teacher… I will be careful not to reveal the following to you to leave you the pleasure of discovery.

While it is not impossible that I have misinterpreted certain narrative elements, these horror sequences do not seem to share any scriptwriting connection. So much so that the last act seems completely out of touch with the rest of the adventure and rushes to bring a satisfying conclusion to the whole scenario. By splitting the experience into several bad dreams, not always very subtle, Little Nightmares 2 seems to lose sight of its narrative ambitions. Its conclusion aside, I didn't quite get where the title wanted to take us. But I have the feeling that neither has he. In the midst of its horror of childish worries or fears straight out of popular tales, LN 2 seemed for a time to want to tackle alienation through the media only to retract with a frankly disappointing sleight of hand. When the credits roll after 5 hours of play, it feels like you've been dealing with a title that aims to create strong and impactful visuals at all costs. This aspect is successful because the monsters encountered offer really striking sequences. The places visited, which are unfortunately limited to horror clichés, offer particularly well-composed rooms and benefit from the careful artistic direction. Too bad it comes at the expense of any talk or solid narrative construction. 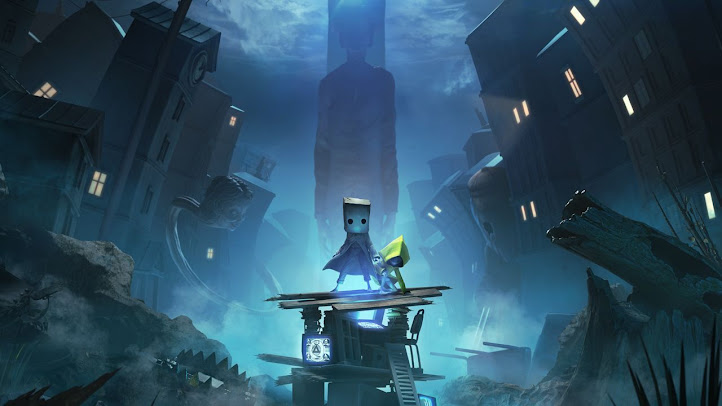 On the gameplay side, the main new feature of this episode is that our hero is now accompanied by another child who allows him to solve puzzles requiring four small hands. I have the short ladders, the jumps over bigger chasms ... If ever the player needs to carry several objects, my sidekick will be happy to help out. Without drastically changing the progression, it also allows you to alternate between phases alone or accompanied and thus regularly reinforce the feeling of insecurity. The pace is also positively affected and this new feature is also welcome. If the puzzles at the start of the game are not very complex, they are still pleasant to solve. Obviously, the growing complexity and the new mechanics implemented over the course of the adventure come to renew the whole. Basically, these environmental puzzles are quite satisfactory. It is regrettable, however, that a good part of them has little diegetic logic. While finding key fragments in sticky fluff makes sense in the Little Nightmares universe, not all puzzles seem so well integrated into the universe. So one wonders which monster would place a key on a hook 3 meters high to connect it to a pulley system.

Unfortunately, Little Nightmares 2 finds its old demons and the main flaw of the first episode here is even more crippling. Little Nightmares differs from Playdead games by depth management. The problem is that, coupled with the relative imprecision of the controls, some sequences become terribly frustrating. Overall, each phase of gameplay requiring a semblance of precision becomes potentially laborious. I am no longer counting the number of failed jumps because I was not perfectly aligned. Going up a corridor, seen from the front, slaloming between the enemies becomes an ordeal as it is difficult to estimate their position in relation to mine. The same goes for the muddled combat phases, which will have made me swear more than once. This overall imprecision is all the more problematic during the pursuit phases. The player has only a small margin of error before being caught. So he must identify the route to take and not miss the risk of death. However, it is easy to get stuck in a piece of scenery or run into your comrade at the least opportune moment. This regularly ruins the experience, as sometimes you are more busy railing against the rough controls than enjoying the very good staging. 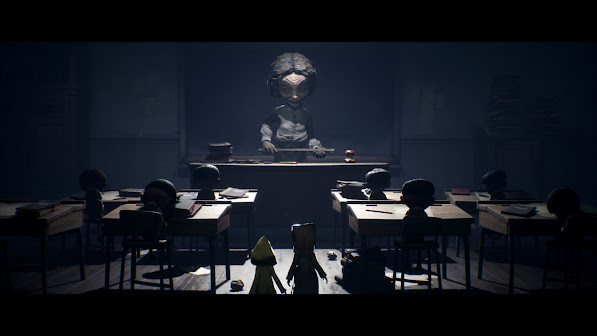 Because on this side Little Nightmares 2 does not disappoint in the least. Without sinking into easy jumpscare, he manages to install a heavy and sticky atmosphere, but also to create scenes of the oppressive chase. If the choice of three-dimensionality causes a problem in terms of gameplay, the chosen vision field allows some striking framing. The camera never stops moving to support the staging and takes a distance when necessary to support the gigantism of places or monsters crossed. There are also nice depth-of-field effects that sometimes weakly mask our opponents, making their nature even more ambiguous and causing concern. These choices are naturally in the service of an effective artistic direction. While I regret the fairly agreed-upon choices of locations and antagonists, their visual treatment has enough personality to overcome this grievance. Tortured and misshapen, monsters inspire fear as much as discomfort. However, I note originality below the first episode which drew on a much more refreshing register in its last act. In short, the whole scene is still as aesthetically successful, but the inspirations of this second installment may lack the madness to make a lasting impression. '' '

From a technical point of view, this Switch version suffers from a lower resolution than on other machines. Running in 720p in docked and portable, this version suffers from a blur typical of this kind of port. Unfortunately, the important scale ratios sometimes make our little protagonists difficult to follow. Worse, I sometimes find it difficult to find my way. The shadow areas are sometimes disabling in low resolution. It's also a shame that I necessarily appreciate the very good art direction and intelligent camera movements less when this blur disturbs the progress. The plastic beauty of LN 2 is an integral part of the pleasure felt to browse it and this version does not fully pay homage to it. This is damaging because, in terms of sound, nothing is to be thrown away. The heavy and disturbing noises emanating from the places crossed allow an anxiety-provoking atmosphere to set in. The cries and groans of the antagonists are not to be outdone while the soundtrack punctuated by music box patterns support the apparent innocence of the protagonists. 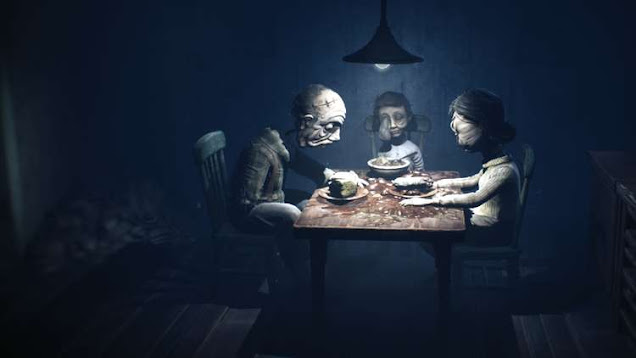 If this new episode shows goodwill, it is nevertheless disappointing on several points. More inclined to multiply horror sequences than to link them together, Little Nightmares 2 seems obsessed with the idea of ​​providing strong and impactful images. These appear regularly free, the fault of a too tenuous common thread. His staging and artistic direction are still as effective as ever, but the problems of perspectives are even more crippling than in the past. The result is an engaging and well-produced adventure, but regularly frustrating, both narratively and playfully.

For more information about the game, please make sure you visit the Little Nightmares 2 official website for more. Feel free to comment blow this post and tell us what you think about the game.