Turrican Flashback Review - A Light Compilation For An Exceptional Series 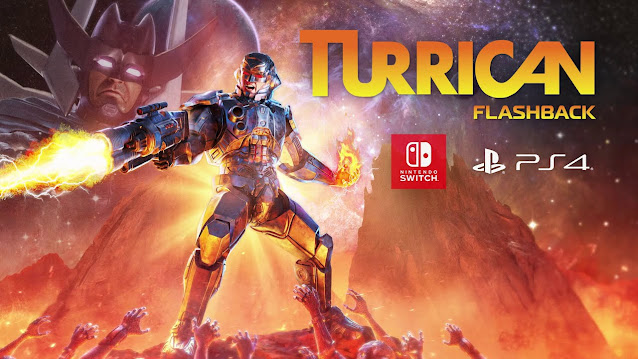 Shaped by Manfred Trenz and the Factor 5 team on behalf of Rainbow Arts, Turrican is one of the most iconic series of the early 1990s. Mixing the mechanics of a Metroid with those of a run & gun, the title born on Commodore 64 and Amiga has forged an excellent reputation among fans of the genre. Strikingly beautiful on release, the game was noted for its edgy gameplay and exceptional Chris Hülsbeck soundtrack. While the two Turrican Anthology compilations should arrive in the coming weeks (they are in advance on the Strictly Limited site), ININ Games is taking the lead with this Turrican Flashback. Bringing together four episodes, it is available on PlayStation 4 (PlayStation 5 compatible) and Nintendo Switch and will bring back fond memories to those who roamed the Alterra colony three decades ago (for rejuvenation, it's a gift ). However, we would have liked the compilation not to be limited to 4 games and a few filters ...

Turrican, what's that name? If you have not experienced this formidable series of games, a step back is in order to understand the selection of this compilation. After finishing on the podium of a coding competition for the Commodore 64 (C64), the young Manfred Trenz got noticed by the German studio Rainbow Arts and developed the excellent The Great Giana Sisters, a parody and assumed copy of Super Mario Bros .. The title, under the ire of Nintendo, will only stay on shelves for a week. At the end of this unfortunate episode, the interested party begins to think about another C64 project and soaks up the atmosphere of Psycho-Nics-Oscar, a popular arcade action game, to develop a prototype. This is how the development of Hurricane begins - a title donated by the marketing department of Rainbow Arts. At the same time, a bunch of friends, passionate about Amiga and programming, are putting the finishing touches on their new game, Masterblazer, a remake of a Lucasfilm Games title called Ballblazer. After a phone call to George Lucas’s branch, one of the group’s members, Julian Eggebrecht (the only one with a command of the English language) learns that the rights to Ballblazer are held by… Rainbow Arts in Düsseldorf. After a few months of negotiation with Lucasfilm Games and Rainbow Arts, Masterblazer is officially released. In the meantime, Julian Eggebretch has made friends with the various members of Rainbow Arts. One day, while at his home, he receives a phone call and receives an offer to become a producer for the company. He did not hesitate for a second and became an employee at Rainbow Arts. 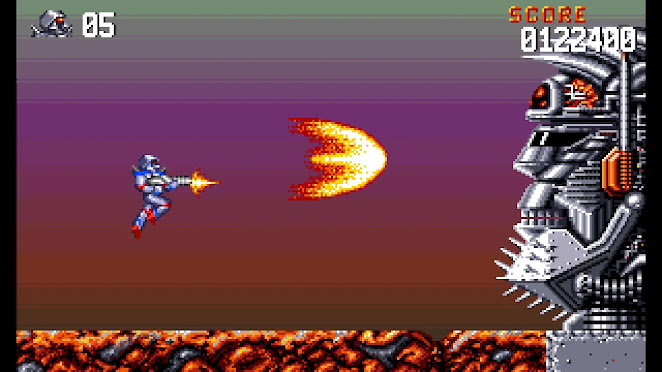 At the time, the prototype of the Hurricane game showed enormous potential. Unfortunately, the popularity of the Commodore 64 is losing its luster around the world and the studio is considering converting it to other successful platforms, including the Amiga. Julian Eggebrecht finally took charge of the port of Hurricane to Amiga while Manfred Trenz continued to develop the original on Commodore 64. For several months, the two teams spearheaded the creation of the game on Commodore 64 and Amiga. but there is a problem: his name! Trenz and Eggebrecht think the Hurricane title sucks and think it needs to be changed. Trenz decides to take the local phone book and starts looking for names that might match. Bingo! He comes across the name of a person of Italian descent called Turricano and decides, quite simply, to change the H from Hurricane to T. Turrican was born and will first land on Commodore 64 and Amiga before being converted - not always by the same teams - on a very large number of media (microphones and consoles). The series will give birth to several episodes including projects (especially on PC and Dreamcast) that will never see the light of day.

Chris Hüelsbeck, the genius of melody

For Amiga lovers, Chris Hüelsbeck is a go-to name. Composer for Rainbow Arts, he participated in the realization of many games on Commodore 64 before moving to Amiga. Thanks to an innovative device created from scratch, he has propelled the music of the Amiga to an exceptional level of quality and inspired many composers. Originally the themes of more than 70 games, the 50-year-old continues to publish albums of his fantastic melodies. 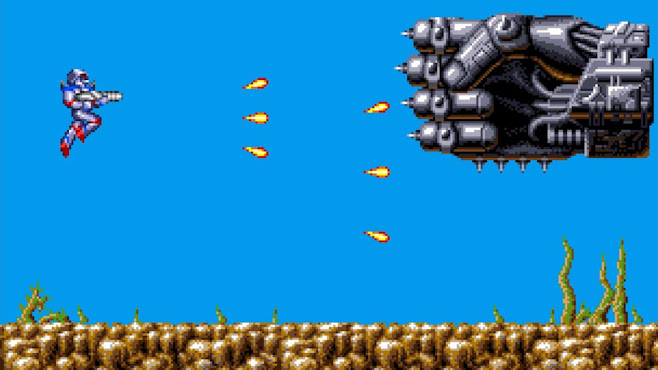 A SELECTION THAT GOES TO THE ESSENTIALS

In Turrican Flashback, one thing is clear: the Commodore 64 version will have to be dispensed with. Knowing that the project was born on this medium, it is a bit of a shame - especially since it is only an emulation - but the developers chose to base themselves on a quartet ranging from the Amiga to home consoles. Thus, the compilation offers 4 episodes: the original and its sequel released on Amiga, Mega Turrican on Mega Drive, and Super Turrican on Super Nintendo. Fans will inevitably be disappointed not to find Super Turrican 2 on the Nintendo machine or the surprising NES version, condensed from the two original episodes, directed by Manfred Trenz. The choice of the Mega Drive grind can also be a matter of debate as Julian Eggebrecht himself considers it as bad as the Game Boy and Turbografx versions. It’s very harsh, but the tastes and colors ... 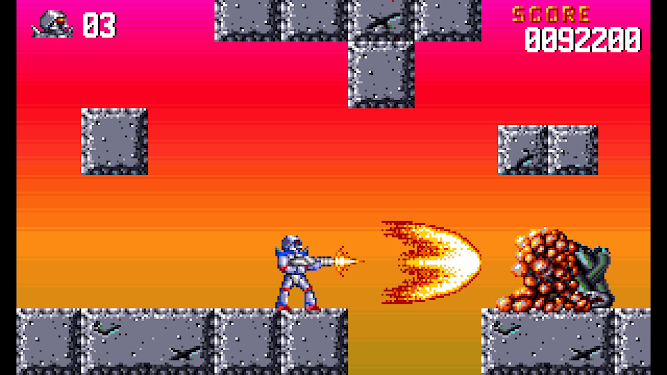 As in the past, we shoot and zap anything that comes in range with one goal in mind: to regain control of Alterra. Whether on foot, in a jet pack, or aboard the ship, Turrican remains equal to itself: very ultra-dynamic, ultra playable, and also hyper eye-catching (previously the terms super, giga, mega were legion). Through these hostile regions, you have to use jumping to progress on the platforms but also to watch the evolution of the bestiary which becomes more and more resistant and clever. The arsenal is so powerful that the screen is constantly illuminated with pellets and other lasers. Each episode thus draws on the clichés of the 1990s and adapts to brilliant music that makes you want to surpass yourself to discover each environment. In this sense, this compilation is really fun and we easily immerse ourselves in the futuristic atmosphere of the license. The compiling studio also had a good idea to incorporate cool options to juggle filters, resolution, interface display, or even the type of video signal desired. It is even possible to access cheats (invincibility, more health, more bombs, level crossing ...) or to rewind the action in case of failure. Nothing revolutionary, of course, but it is still very practical as the difficulty is raised. For the rest, we are still entitled to ask much more for a compilation. There are absolutely no bonuses (don't expect video interviews, preparatory sketches or even a sound test to revel in the sumptuous themes of Chris Hüelsbeck) and this easy way out is regrettable. This does not detract from the quality of the tracks, but in terms of compilation, Turrican Flashback is in the mid-base. 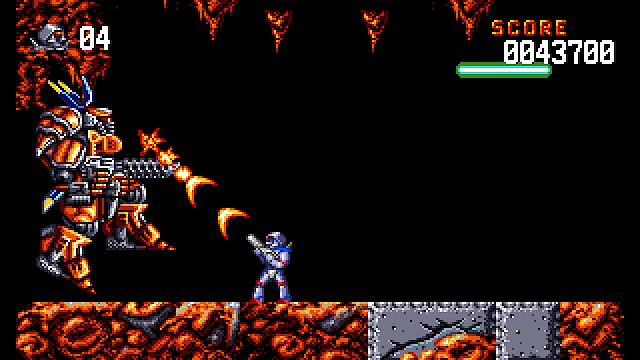 As the Turrican series prepares to celebrate its 30th anniversary, the first two Amiga adventures are still a safe bet. In the field of run and gun, the license is king and this flashback proves that it hasn't aged a bit. Despite a few focal issues, each adventure is incredibly nervous and transports the player to a world of sci-fi and 80 ’vibe with nice big nods to Alien and Terminator. The Mega Drive and Super Nintendo episodes also farewell. It's beautiful (if you like colored pixels), it moves well and lets off steam, with a big dose of challenge. Too bad this compilation took the easy way out because, with more games and a bonus section, it would have had a lot more going for it. But fans and the curious will appreciate.

For more information regarding this video game, please make sure you visit the Turrican Flashback official website for all details.